Please ensure Javascript is enabled for purposes of website accessibility
Log In Help Join The Motley Fool
Free Article Join Over 1 Million Premium Members And Get More In-Depth Stock Guidance and Research
By Will Ebiefung - May 6, 2020 at 12:40PM

Do you want to follow in the footsteps of the Oracle of Omaha? Here are three stocks to consider this month.

Warren Buffett bought his first stock at age 11. Now, 78 years later, he is reportedly the fourth-richest man in the world and CEO of a $444 billion holding company. Buffett achieved this success through a simple but effective investing strategy based on value and long-term holding. The contents of Berkshire Hathaway's portfolio are made publicly available through SEC filings (albeit at a delay), which means regular investors can get a glimpse into the mind of this legendary investor.

Among those holdings, I see three as standout stocks to buy in May. StoneCo (STNE 6.56%), is a bet on Brazil's fast-growing fintech market. And the other two, Amazon.com (AMZN 3.60%), and Apple (AAPL 1.89%), are investments in consumer-driven tech. All are poised to beat the market over the long term because of their strong moats and compelling business models. 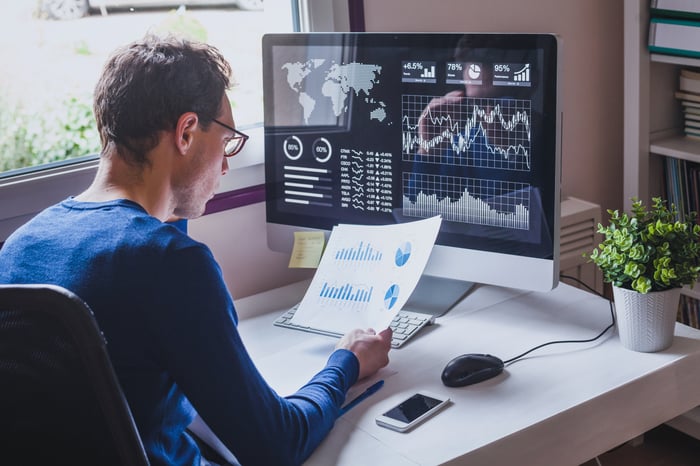 Warren Buffett has called Apple the "best business in the world," and Berkshire Hathaway owns $75.4 billion worth of Apple shares, giving it a 5.7% stake in the company.

Apple meets Buffett's investment criteria because its business of designing and manufacturing smartphones and other personal hardware is simple and easy to understand. And with a price-to-earnings multiple of around 23, the stock is available at a compelling valuation compared to other big tech companies.

Apple stock has had a good run since 2016, when Berkshire first bought shares. And revenue rose from $215.64 billion in fiscal 2016 to $260.17 billion in fiscal 2019. But top-line growth has slowed, with revenue falling from $265.6 billion in fiscal 2018 to $260.2 billion in 2019. The slowdown is mainly due to a drop in iPhone sales, but Apple still has room to grow. Investors can look forward to the launch of the budget-friendly iPhone SE as well as Apple's fast-growing services business to drive revenue for years to come. The developing world is also a great opportunity for Apple, with India representing a compelling growth market.

Like many big tech companies, Apple has struggled during the coronavirus pandemic. But so far, the stock has performed better than the wider market with shares down 1.56% year-to-date compared to a 12.38% decline in the S&P 500.

Shareholders will also benefit from Apple's substantial capital return policies. The company sports a dividend yield of 1.12% and a massive buyback program with a staggering $175 billion worth of shares eligible to be repurchased as of March 28, 2020. While buybacks are controversial, they help mature companies like Apple return value to shareholders and support EPS even when top-line growth slows down.

Berkshire Hathaway owns $1.26 billion worth of Amazon stock, giving it a 0.1% stake in the company. While Berkshire's Amazon investment is significantly smaller than its Apple bet, the company fits perfectly into Buffett's investment strategy as Amazon's e-commerce business is easy-to-understand and it has a tremendous competitive advantage due to its large size and rock-solid brand. While Amazon's sky-high earnings multiple of 101 is unusual for a Buffett stock, the company deserves this valuation because of its tremendous growth potential.

Amazon's revenue grew at a 27% compound annual growth rate from 2016 to 2019 and it still has plenty of room to grow through international expansion and its cloud computing platform, Amazon Web Services (AWS). International sales only make up 28% percent of Amazon's total revenue and the company has plans to grow dramatically in places like Brazil, Turkey, and India. AWS is Amazon's fastest-growing segment, with sales growing 37%, in 2019.

Amazon stock has performed exceptionally well during the coronavirus pandemic as people turn to online shopping because of social distancing mandates.

First-quarter net sales surged 26% year-over-year from $59.7 billion to $75.45 billion. And the stock is up 23.71% year-to-date compared to a decline of 12.38% in the S&P 500. But despite solid top-line growth in the first quarter, Amazon reported weaker-than-expected earnings because of higher operating costs due to the pandemic.

The good news is that the coronavirus impact on the bottom line will eventually wane, while more people might end up shopping on Amazon.com and joining its Prime member program after the pandemic drove them to online shopping.

Latin America might not be the first place that comes to mind when you think about tech, but StoneCo may change your mind. Buffett invested in the Brazil-based fintech back in 2018 when it IPO'd at around $24 per share. The stock currently trades at $26, which means the price is still low enough for new investors to benefit from the upside Buffet saw two years ago.

While StoneCo's complex international business is unusual for Buffett's portfolio, it's easy to see why he bought the stock. The company looks set to outperform the market over the long term.

StoneCo's key advantage is its proximity to customers through its hubs, which are brick-and-mortar operations with service, sales, and operations teams that can reach clients locally and tailor solutions to meet their needs. This physical presence is important in a market like Brazil, where people are still relatively new to mobile payment systems. The company added over 100 hubs in 2019 after reporting a total of 245 in 2018. The hubs now cover around 2,700 Brazilian cities and their client base grew at over 60% in most Brazilian states.

StoneCo is also aiming to replace its clients' traditional banking relationship through an online banking platform that will feature bill payments, wire transfers, and other services. This growth strategy will synergize well with the companies massive physical footprint and help it take market share from Brazil's regional banks.