Please ensure Javascript is enabled for purposes of website accessibility
Log In Help Join The Motley Fool
Free Article Join Over 1 Million Premium Members And Get More In-Depth Stock Guidance and Research
By Billy Duberstein - May 6, 2020 at 3:10PM

Despite Norwegian’s dire warnings, it's lured investors to its recovery story, but at a steep price.

Norwegian Cruise Lines (NCLH 0.07%) fell 22.6% on Tuesday, May 5, after the company released a statement saying that, absent more funding, the company might not last through the year. The COVID-19 outbreak has caused a huge amount of damage to the cruise industry, with "no-sail" orders extending through July and an uncertain future as to whether cruise companies will ever set sail again. Ominously, Norwegian stated, "the Company does not have sufficient liquidity to meet its obligations over the next twelve months, assuming no additional financing or other proactive measures."

However, the day before this release, the beleaguered cruise line actually did raise additional funds: $400 million in convertible debt from private equity firm L Catterton.

The company then followed that up by raising over $1.8 billion on Wednesday, May 6, in a mix of stock and debt. The total haul of around $2.2 billion should help shore up Norwegian's balance sheet for "well over twelve months," according to the company. But the new money comes at a big cost. 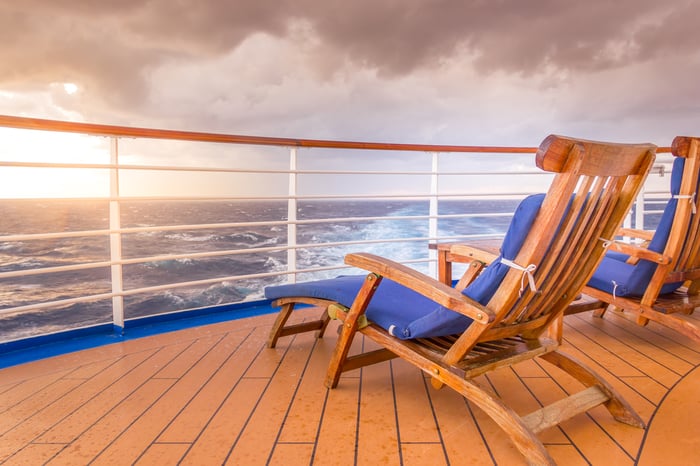 L Catterton is a Connecticut-based private equity firm that specializes in consumer companies, with some $20 billion deployed. The company gave a glowing endorsement of Norwegian in a statement after its investment:

The cruise industry has been very resilient over a long period of time, driven by strong secular tailwinds and a high level of guest satisfaction. People enjoy cruising, with many guests taking multiple voyages over time. The industry has overcome numerous challenges in the past, and we expect that the industry will rebound and prosper with even further enhancements to their already rigorous health and safety protocols in place in the future. Within the industry, the three brands of Norwegian Cruise Line Holdings have carved out distinctive leadership positions in their respective markets, guided capably by Frank Del Rio and his exceptional management team. We couldn't be more excited to support the team at Norwegian as they work through this suspension of travel and begin to commence operations after their voluntary suspension of voyages.

That's high praise, and I think Catterton hopes to one day convert its investment into common stock. However, public shareholders should note that Catterton is buying unsecured convertible notes, which sit in between common equity and secured debt in the capital structure. That means if Norwegian does go bankrupt, and shares go to zero, Catteron might be able to recoup some of its investment -- though it's not guaranteed.

Catterton's notes also come with interesting terms. The six-year notes are due in 2026, with different interest payments in different years. The first year's interest rate is 7%, and the following four years have an interest rate of 7.5%, but with 3% paid in cash and the remaining 4.5% paid "in-kind," or accruing to the principal. Then, the final year of the notes will bear an all-cash interest rate of 7.5%.

The notes will also be convertible into Norwegian common stock at any time prior to maturity, though it's unclear at what strike price. Catterton will also be able to nominate one member of the company's board of directors, as long as it maintains an ownership threshold.

Adding another layer of protection for Catterton, its investment is conditioned on Norwegian raising at least another $1 billion from other investors -- which the company did the very next day.

On May 6, Norwegian went back to the capital markets, raising:

While it's a good thing that Norwegian has boosted its liquidity by a substantial amount, you can see that the $1.825 billion capital raise was extremely expensive -- even more expensive than capital raised by rivals.

Prior to the capital raise, the company said it only had $1.4 billion in cash at the end of March, and that was after drawing $1.55 billion from its revolving credit facilities earlier in the month. Without those facilities, Norwegian would have run dry. After significant cost cuts, the company forecasts its monthly cash burn at $110 to $150 million, meaning it only had about nine to 10 months of cash left, even without accounting for maturing debts.

And beyond the company's $8.6 billion in debt -- which will now reach $10.4 billion after the new senior and convertible notes -- Norwegian has potential refund liabilities on top of that. Currently, the company is liable for $1.8 billion in advanced deposits, of which $850 million is for cruises through June 30, and $350 million for cruises for the remainder of 2020.

Norwegian said about half of its customers have requested cash refunds, while the other half has taken the 125% offer for future credits. However, should Norwegian get a new wave of requests for cash refunds, its liquidity could take yet another hit beyond the monthly cash burn.

There's no doubt that Norwegian still has its fans -- provided it can get back to normal. Catterton's statement was testament to that, as was the fact that the company was actually able to raise equity at all, even at a lowly $11 per share, down over 80% from the company's all-time highs.

Norwegian also noted that prior to COVID-19, it had fully booked its ships at higher rates while growing capacity at 7% in the first quarter. The company is also receiving maturity extensions with many Export Credit Agencies that guarantee some of Norwegian's term loans secured by its ships, so it's getting a break there as well.

Norwegian was a good enough business with enough fans to raise more capital and avoid bankruptcy this year. However, all of this comes at a big cost to common shareholders. Those owning Norwegian stock need to forecast when its ships may begin sailing again, whether the company might even need to return to the capital markets for more money down the road, and then also predict if the global consumer is financially secure enough to afford cruises once sailing commences. Once cruising does re-commence, Norwegian will have a lot of debt to pay off as well as more shares outstanding.

While it's possible Norwegian's stock has gotten too cheap, it also still remains a very risky play based on those uncertainties, until more information comes to light.