A recent capital raise and cheap stock price were enough to lure this Fool aboard.

I admit, I haven't very been very bullish on cruise stocks amid the coronavirus outbreak, despite their large price declines. I happen to think cruises won't begin sailing as early as many hope, with likely delays into late 2020 or early 2021 -- and that's at the earliest. Without a vaccine, likely 18 months away, it's unclear whether cruises will be able to set sail before there is wide-scale immunity.

In addition, cruise companies aren't domiciled in the U.S. and therefore don't pay U.S. corporate taxes. That means cruises are currently disqualified from the $2.2 trillion CARES Act stimulus that Congress passed in March. Should cruising delays drag on, that could very well mean bankruptcy. In addition, on Monday, April 13, per a new CDC "no-sail" order, all cruises suspended their operations through June, causing their stocks to fall hard yet again.

Yet I decided to actually go ahead and buy some Carnival Corporation (CCL 3.60%) stock on Monday, while also selling puts on the stock. Selling a put means that in exchange for collecting a premium now, I'm on the hook to buy 100 shares should Carnival stock fall beneath a certain strike price by a certain time.

So, what could I possibly be thinking? 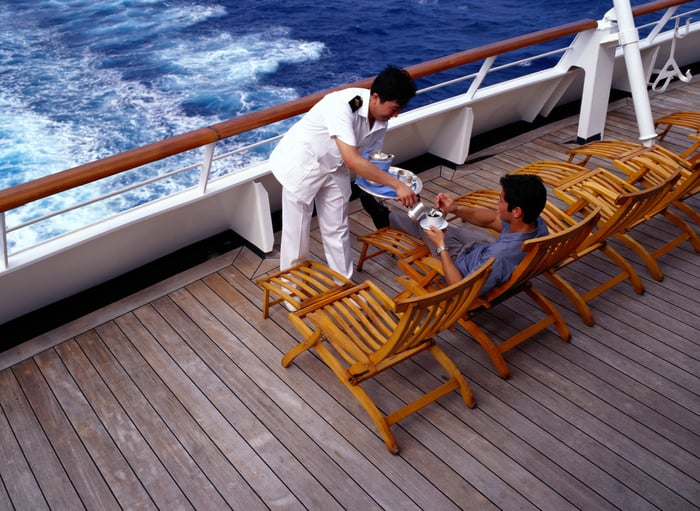 Why I scooped up shares of Carnival. Image source: Getty Images.

More than any other cruise stock, Carnival wasted no time raising cash amid the crisis -- and lots of it. In fact, its moves have been so big that it should be enough to get the company through the no-sail period this year and likely into next.

Carnival raised the cash through the following instruments:

Encouragingly, among the participants in the equity raise was the Public Investment Fund of Saudi Arabia (PIF), which purchased 43.5 million shares.  Carnival director Randall Weisenburger also stepped up big, buying $10 million of stock at $8. Having an insider and the PIF put that much money into Carnival was encouraging, because even if the new cash infusions don't get Carnival quite all the way through to the other side of the crisis, the company appears to have willing debt and equity buyers to raise more bridge capital if need be.

While the raise comes at a huge cost to shareholders, both via cheap stock dilution and high-interest debt, $6.5 billion adds a good amount of cash to Carnival's balance sheet, which had only about $1.35 billion as of Feb. 29 versus $12.9 billion in debt.

Estimates vary as to Carnival's cash burn, with analysts estimating anywhere from $500 million to $1 billion per month as of now. However, should the entire cruise line shut down for a long period of time, it's possible that Carnival could furlough workers temporarily, cut executive pay, or lower variable costs more than it already has. Other analysts estimate that if Carnival can begin sailing at low capacity in Q3 and Q4, it would burn through only about $2.2 billion for the whole year.

Assuming things get back to normal in two years...

In its fiscal 2019 year, ended in November, Carnival made $3.28 billion in operating income and, after about $183 million in interest expense and minimal taxes, $2.99 billion in net income. Assuming the company gets back to that level of operating income starting in fiscal 2022, Carnival's "new" baseline earnings per share would be lower, because of both higher interest expense and more shares outstanding. But how much?

We can assume another $460 million in additional interest expense from the 11.5% senior notes. Since shares have risen above the $10 strike of the convertible notes, let's assume full conversion. Using the same operating income from 2019, we get the following:

The "new" baseline EPS for Carnival of $2.61 is much lower than the $4.32 earned in 2019. showing just how expensive and dilutive the capital raise has been. Still, it's a much better alternative to bankruptcy.

Over the past few years, Carnival has traded with a P/E ratio between 10 and 20, though even before the coronavirus crisis, valuation levels had fallen to the lower end of the range. 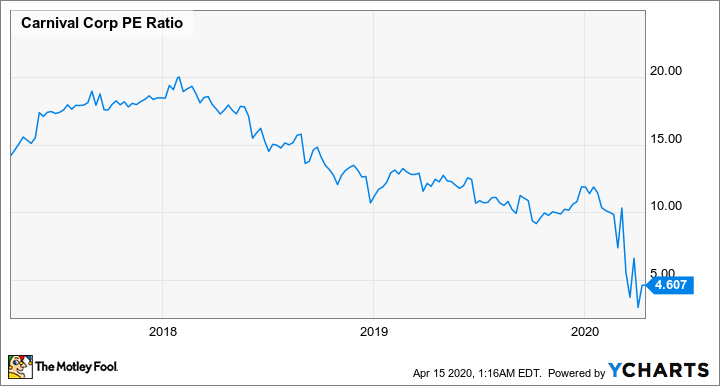 In addition, the new Carnival will be much more indebted than the pre-COVID-19 company, which may necessitate a low P/E ratio. Still, a relatively modest P/E ratio of 10 would yield an equity value of $26. That's in comparison with the recent insider purchases at $8 and the current stock price around $12. Even assuming it takes two years to get back to that price, that's still a fair amount of upside and a margin of safety.

But the risks are still real

Of course, there are still risks. If cruise lines are forbidden from sailing all the way through 2021, Carnival may need to raise more capital. If it does, it could dilute per-share earnings even further. And if travel bans remain and the company continues to burn cash, bankruptcy is still a possibility. As such, my position in Carnival is currently very small relative to the size of my overall portfolio.

But after the current massive capital raise, the chances of bankruptcy are significantly less today than they were even back in late March. If you're a risk-tolerant investor, that makes Carnival a deep value stock worth exploring -- just make sure to size your position according to your risk tolerance.