Please ensure Javascript is enabled for purposes of website accessibility
Log In Help Join The Motley Fool
Free Article Join Over 1 Million Premium Members And Get More In-Depth Stock Guidance and Research
By Billy Duberstein - Mar 27, 2020 at 6:49AM

The initial language appears to exclude cruise lines from the stimulus bill, but there could be a compromise.

The market breathed a big sigh of relief this week upon Senate passage of the new $2.2 trillion stimulus package on Wednesday night. The bill includes a $500 billion bailout fund for distressed businesses, with $75 billion earmarked for airlines, hotels, and other vital distressed companies, and $425 billion available for other large distressed businesses. That fund will be managed by the Federal Reserve and overseen by an inspector general and a bipartisan five-person commission appointed by Congress.

That's good news for many businesses that have been forced to shutter due to the lockdown in response to COVID-19. Still, industries that receive bailouts may run into issues with shareholder value, given that the new restrictions prevent companies from buying back stock as long as they are on government assistance and for an additional year thereafter. In addition, the government could take equity stakes in these companies, further diluting shareholders.

However, it appears the large cruise companies, which aren't incorporated in the U.S., may be left out of any federal aid whatsoever -- at least, unless they give even more concessions than others. That sets up a complicated outlook for cruise stock investors. 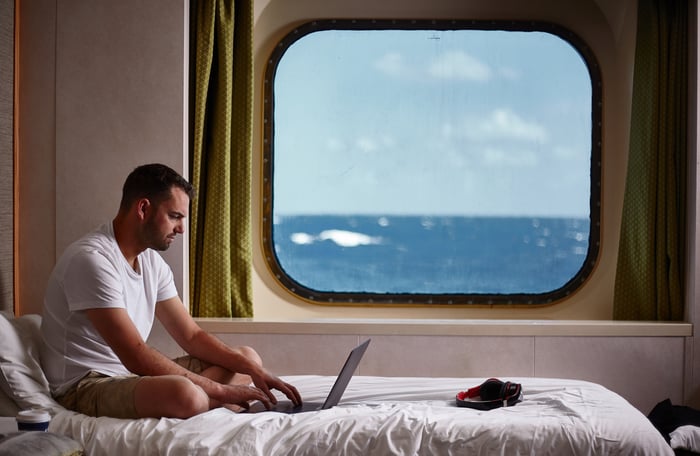 That makes bailing out the industry a tough pill to swallow, especially when there is so much need to go around.

Even though it appears the cruise lines may be left out of this bill as stated, it doesn't mean that things are totally over. When asked about the cruise industry issue at a press conference on Thursday, March 26, President Donald Trump indicated he would like to help, saying, "We'll work very hard to help the cruise lines." However, he also said it's "very tough to make a loan to a company when they're based in a different country."

Setting the stage for the art of the deal

However, the cruise lines also have made public statements that seem to be an opening for their own side of the negotiation. A spokeswoman for the Cruise Line International Association said that the CLIA "had not sought a bailout."

In addition, the spokeswoman pointed to statistics that support the cruise lines' importance to the U.S. economy, saying cruises paid $23 billion in wages and salaries -- though only 40% of the jobs in the industry are U.S. jobs. A majority of the ships' crews are from foreign countries.

The spokeswoman also said cruises "contributed $53 billion to the U.S. economy." I'm not sure exactly what "contributed" means -- but it likely means that cruises support ancillary businesses like independent travel agencies and other onshore activities based in the U.S., in addition to their own direct contributions.

Thus, with the U.S. government apparently leaving the cruises excluded from the bill, and the cruises saying they hadn't sought a bailout -- all while mentioning how much they contribute to the U.S. economy -- we could be in the early stages of a prolonged negotiation that could last for much of 2020. That could complicate things a lot for cruise line investors, even more so than investors in airlines or hotel chains.

The cruise companies recently tapped their credit lines, adding billions in liquidity to their balance sheets as they attempt to wait out this period in which they are forbidden to sail.

It's quite likely that the cruises don't want to get a bailout if they don't have to, and are likely hoping for quick containment of the coronavirus. However, if the COVID-19 epidemic drags on for months and keeps people away from cruises longer than the current 30-day shutdown period, which I personally believe it will, the industry may then need to reconsider its options regarding federal help.

On the other hand, helping the cruise lines' cases is that the U.S. government would also rather not see massive layoffs, which the cruise companies may resort to as they try to rein in costs to wait out the storm.

In either case, it appears that this tough negotiation is going to play out over weeks and likely months as the industry waits to see how long the outbreak and quarantine will last.

The high uncertainty in the cruise industry essentially makes these stocks lottery tickets right now. The stocks are still down between 60% and 75% this year, putting them in deep value territory and giving them a lot of potential upside if the pause in cruising is short and customers return this summer. However, it seems a long shot that the industry will be back and up and running by then. It would require quick containment of the virus, as well as people flocking back to cruises thereafter, which itself is not a certainty. A vaccine likely won't be available for 18 months, and that would be a really long time for cruises to go without any revenue.

Yet even if the cruise operators wait out the shutdown and eschew federal aid, they'll come out the other side of the crisis even more heavily indebted than they already are -- and most carry a significant amount of debt already. In addition, these companies will have eaten significant operating losses for as long as the crisis drags on.

On the other hand, if cruise lines do get federal aid and thus have to register in the U.S., investors should probably chop 21% off of their historical earnings to get a true picture of their post-tax earnings power going forward.