Please ensure Javascript is enabled for purposes of website accessibility
Log In Help Join The Motley Fool
Free Article Join Over 1 Million Premium Members And Get More In-Depth Stock Guidance and Research
By Lawrence Rothman, CFA – May 6, 2020 at 12:27PM

The coffee chain's results will continue to feel the impact of widespread stay-at-home orders, but improving trends in China demonstrate that the company can get back on track in 2020.

Certainly, Starbucks (SBUX 3.21%) had a challenging fiscal second quarter (ended March 29, 2020). Across the company, same-store sales (comps) fell 10%, driven by lower customer traffic. Broken out by region, the Americas segment experienced a 3% comps drop, and the international business saw an eye-popping 31% decline. But it's not all bad news for the coffee giant.

Obviously, these results were impacted by the onset of the coronavirus as the company shut down stores in China and then elsewhere. Management deserves credit for being proactive, ultimately closing 80% of its more than 4,000 locations in China by early February.

When COVID-19 spread to the United States, Starbucks started closing locations in mid-March, with the majority of its roughly 10,000 company-operated U.S. and Canadian stores closed by late March while others were restricted to delivery and drive-thru. Additionally, many of the approximately 8,200 licensed stores also shut down.

With many North American stores closed late into its fiscal third quarter, management expects a greater impact on its next quarterly report since the region produces the lion's share of revenue and profits.

Management withdrew its guidance, which is prudent given the uncertain environment. Still, while the company will go through a rough couple of quarters, investors can look to China as a roadmap for the future recovery. 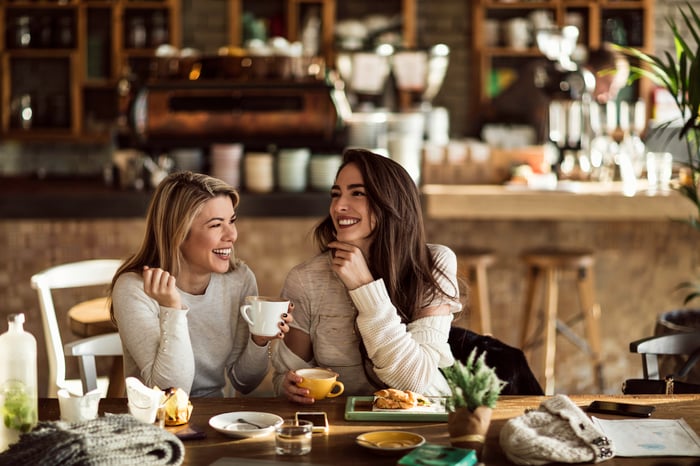 China's fiscal second-quarter comps dropped 50%. However, after declining 78% in February, business conditions improved on a week-over-week basis. By April, comps were down 35%, and as of the beginning of that month, more than 95% of the stores were open, albeit under restrictions such as reduced hours and seating. Management expects fiscal third-quarter comps in the region to fall 25% to 35%, while the fourth quarter improves to approximately flat by the end of the period.

These results and management's guidance show a slow but steady improvement. Of course, while everyone would like to see a sharp rise in sales, it is not going to happen, since stores are not operating at full capacity. It does show that the business interruption did not permanently disrupt people's visits to Starbucks, however.

It would be worrisome if the U.S. market, Starbucks' largest, had been underperforming before the pandemic set in. Fortunately, that is not the case. For the bulk of the quarter, through mid-March, U.S. comps were up 8%. In fact, the entire Americas segment has enjoyed positive comps for more than a decade with the streak going back to the financial crisis of 2008 and 2009.

Management acknowledged the short-term sales and earnings pressure, but the company has not felt the need to cut its dividend in these uncertain times. CFO Patrick Grismer stated on the latest earnings call, "[...] by honoring our upcoming quarterly dividend declaration, we are supporting our shareholders with a predictable return of capital in an uncertain time." Grismer explained that the cash-burn rate is $125 million per week, but he expects this to improve as the Americas (U.S. and Canada) operations begin normalizing in May.

Historically, Starbucks has generated plenty of cash flow to cover its dividend. In fiscal 2019, its free cash flow of $3.2 billion was more than sufficient to pay out $1.8 billion of dividends. Unless the situation takes a significant turn for the worse, I expect management to maintain the current $0.41 per share quarterly payout.

There are, of course, differences between the faster-growing China market and the large but mature U.S. region. But the steps the company took to reopen in China will shed light on the strategy for its home market. The early signs of recovery suggest that as people get back to work and back into their routines, Starbucks will still be their go-to stop for a cup of coffee.

In an environment full of change and uncertainty, Starbucks offers investors a degree of predictability. More than merely comforting, it's also good for shareholders.