Please ensure Javascript is enabled for purposes of website accessibility
Log In Help Join The Motley Fool
Free Article Join Over 1 Million Premium Members And Get More In-Depth Stock Guidance and Research
By Timothy Green – Updated May 6, 2020 at 12:40PM

Disney saw profits tumble due to the pandemic, and Microsoft looks to grow its hardware business with new devices.

The Dow Jones Industrial Average (^DJI -1.54%) struggled to find direction on Wednesday, with the index roughly flat at 11:40 a.m. EDT after fluctuating earlier in the day. The April Employment Report from ADP showed U.S. nonfarm private-sector payrolls down more than 20 million for the month, with 6 million jobs lost among small businesses.

While the Dow gyrated around breakeven, shares of Disney (DIS -1.96%) and Microsoft (MSFT -1.48%) managed to book small gains by late morning. Disney stock was up despite a second-quarter profit collapse and the suspension of its dividend, while Microsoft jumped after the tech giant announced a variety of new hardware products.

With Disney forced to close its parks in March due to the pandemic, a rough second-quarter report from the entertainment giant was a guarantee. It reported a 93% decline in earnings per share, and a 63% decline after backing out certain items. Adjusted EPS of $0.60 missed analyst estimates by $0.30. 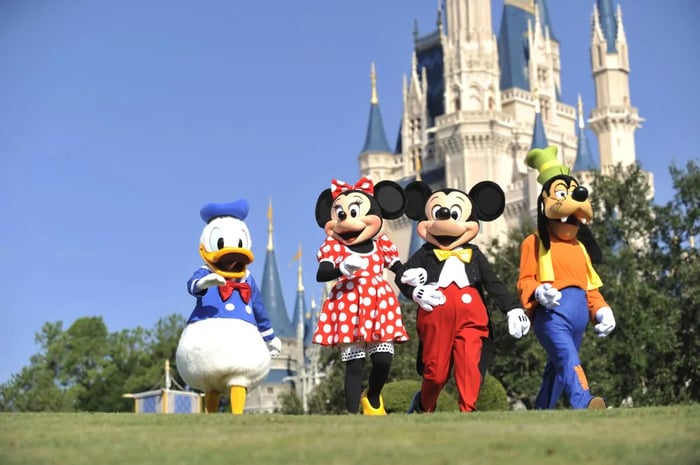 Total revenue was $18 billion, up 21% year over year and $510 million higher than analysts were expecting. The growth was largely due to Disney's acquisition of Twenty-First Century Fox, which closed in late March of 2019. The parks, experiences, and products segment suffered a 10% revenue decline after the theme parks were closed late in the quarter, and Disney estimated that the pandemic reduced operating income in the segment by $1 billion.

The direct-to-consumer and international segment, which contains Disney+ and the company's other streaming services, saw revenue nearly quadruple. A combination of the Fox acquisition and the full inclusion of Hulu's revenue were responsible for some of that growth.

As of March 28, Disney+ had 33.5 million subscribers, and Hulu had 32.1 million. Disney+ surpassed 50 million subscribers in early April, and the company's other streaming services likely got a boost as well, with people staying home due to the pandemic.

Disney has already furloughed employees as it grapples with the pandemic. The company announced alongside its report that it would not pay its semiannual cash dividend for the first half of 2020. The move is expected to preserve about $1.6 billion in cash.

Despite the earnings collapse and dividend suspension, shares of Disney were up 1.6% Wednesday morning. News that it plans to begin a phased reopening of Shanghai Disneyland on May 11 could be helping the cause. Disney stock remains down 32% from its 52-week high.

Sales of Microsoft's Surface devices have held up during the pandemic as many people began working from home. Surface sales grew by 1% in Microsoft's fiscal third quarter, with supply constraints holding back the segment. While it's hard to say how long the work-from-home boom will last, Microsoft is ready to take advantage with a slew of new Surface devices.

The Surface Go 2 is a budget offering, featuring a 10.5-inch screen and a low-power processor. It's a sequel to the original Surface Go launched in 2018, a product that didn't make all that much sense. The Surface Go 2 will be priced at $399 and available on May 12, although an attachable keyboard will need to be purchased separately.

The Surface Book 3 is a full-fledged laptop, available in 13-inch and 15-inch configurations. The devices, which start at $1,599 and will be available on May 21, are powered by Intel processors and NVIDIA discrete GPUs.

While the Surface business has become significant for Microsoft in its own right, sales of the devices can also drive usage of Microsoft's ecosystem of products, including Windows, Office, and Teams. Shares of Microsoft were up 1.5% Wednesday morning, inching closer to their 52-week high.