Please ensure Javascript is enabled for purposes of website accessibility
Log In Help Join The Motley Fool
Free Article Join Over 1 Million Premium Members And Get More In-Depth Stock Guidance and Research
By Neil Patel - May 6, 2020 at 8:49PM

Planet Fitness (PLNT -0.73%), one of the largest franchisors and operators of fitness centers in the U.S., was performing very strongly prior to the onset of the coronavirus pandemic. Since the company's IPO in August 2015 to January 31st of this year, the stock produced a total return of 342%. This is compared to the 55% total return of the S&P 500 during the same time period.

It's easy to see why Planet Fitness' stock has been on such a tear. 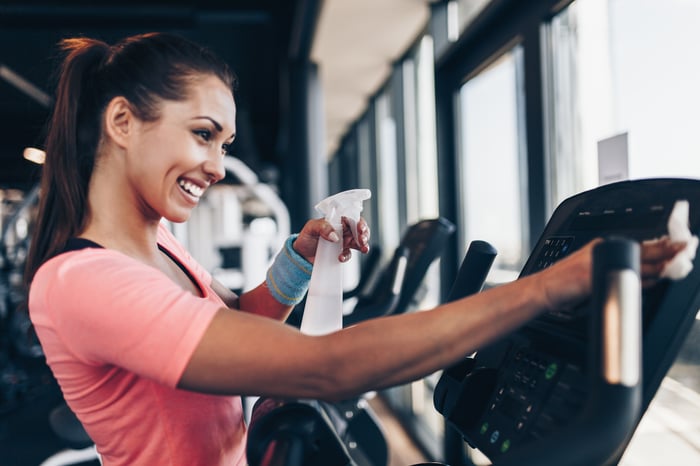 As shown in the table below, key operating metrics like revenue, number of locations, and number of members have increased significantly in the past four years.

As of December 30th, 2019, the company had 14.4 million members and 2,001 stores in all 50 states, D.C., Puerto Rico, Canada, the Dominican Republic, Panama, Mexico, and Australia, with many more locations in the pipeline. CEO Chris Rondeau sees the long-term potential for 4,000 locations just in the U.S. That's not a bad growth runway, but there's still a huge opportunity going forward.

Providing a welcoming, non-intimidating workout environment at a very low cost has been the primary driver of success for Planet Fitness. While the median gym membership in the United States costs $61 per month, the basic membership at Planet Fitness is $10 per month. There's an upgraded, PF Black Card membership that costs $22.99 per month, which provides access to any location worldwide and allows you to bring a guest anytime, among other perks. Delivering perceived value in excess of price is almost certain to win loyal customers.

The perfect scenario for any fitness club is to have paying members who rarely show up. The low membership fee and inviting atmosphere attract the casual gym-goer, as 35% of new joins have never belonged to a gym before. According to The Wall Street Journal, some locations have almost 10 times as many members as can fit in the gym at any one time. This is exactly what Planet Fitness wants. Members that rarely go to the gym are more profitable and use far less resources than those who go more frequently. Canceling the membership is admitting that you have given up. To avoid this feeling, many continue to pay the $10 monthly fee with the hope and intention of eventually improving his/her health and fitness. These are customers who like the idea of exercise more than the actual thing.

Ready to get back in shape

Despite its recent coronavirus-related troubles, I believe Planet Fitness will get back on track toward continued growth once the pandemic begins to subside. There could be a new wave of membership growth as people have been stuck at home and neglected working out. Those who have previously ignored their health and fitness could make it a priority going forward. And Planet Fitness seems like a natural choice for many looking to join for the first time.

Membership growth feeds the company's scale-driven competitive advantage. Having national reach allows the company to purchase equipment from suppliers at better prices and spend more marketing dollars to drive volume compared to independent gyms, which in turn leads to greater value for consumers. Planet Fitness and its franchisees have spent over $870 million on marketing and advertising since 2011, making it the most popular fitness concept when it comes to brand awareness. The annual spend is increasing at an accelerating pace each year, a move I think is warranted given the burgeoning store count and the need to drive membership growth by becoming a top-of-mind choice for consumers.

In addition to an aggressive marketing campaign, Planet Fitness' size lets it obtain attractive real estate for its new locations. The current economic crisis will accelerate the closing of big box retailers, which will provide an opportunity for the company to take over leases from desperate landlords on favorable terms. This will not happen overnight, however. The company should also benefit from the lockdown by taking market share away from struggling competitors. Gold's Gym is permanently closing about 30 of its company-owned locations and filed for bankruptcy earlier this week. Town Sports International and 24 Hour Fitness, two large mid-priced chains in the U.S., are potentially seeking bankruptcy to remedy their financial difficulties. Planet Fitness' capital-light franchising model, coupled with the fact that the company had almost as much cash on its balance sheet at the start of 2020 as total operating expenses in all of 2019, gives me confidence that it can weather the storm.

All of these factors push the flywheel in motion, driving member growth that leads to low prices and great value for consumers. Once the world moves past this awful pandemic, Planet Fitness will be able to once again flex its muscles.