Please ensure Javascript is enabled for purposes of website accessibility
Log In Help Join The Motley Fool
Free Article Join Over 1 Million Premium Members And Get More In-Depth Stock Guidance and Research
By Eric Volkman – May 6, 2020 at 7:59PM

Tax data shows that April was by far the liveliest month for legal sales of the drug in the state's history.

Oklahoma medical marijuana patients are confined mostly to their homes as are most of us, but it seems they're not letting that get in the way of buying their green medicine.

According to state tax data obtained by The Oklahoman, in April, dispensaries remitted nearly $9.8 million in taxes to Oklahoma, shattering the previous monthly record of $7.8 million. The latter high, incidentally, was set in March.

The newspaper extrapolated the tax data to arrive at a total figure of $61.4 million for sales. This works out to nearly $217 per licensed patient. 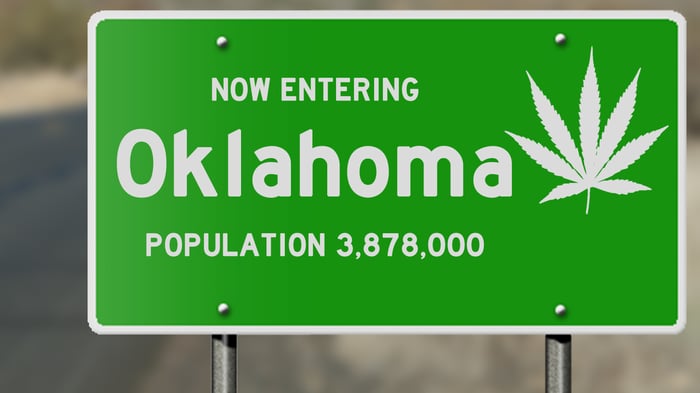 As with numerous other states that permit the sale and use of marijuana, the many dispensaries that serve Oklahomans have been classified as "essential" businesses through the SARS-CoV-2 coronavirus outbreak. They are therefore allowed to continue to operate, while many other types of commerce have been temporarily halted.

Typical for a state in the South-Central U.S., Oklahoma permits only medical cannabis. Of the six states bordering Oklahoma, only Colorado has legalized recreational marijuana.

While there are a comparatively high number of dispensaries operating in Oklahoma, many are small operations; large multi-state operators (MSOs) do not have a dominant presence.

One marijuana company that has a bit of a network is Grassroots, which has agreed to be acquired by Curaleaf (CURLF 33.12%) in an acquisition that is taking some time to close. If and when it does, Curaleaf will likely take over the four Oklahoma Herbology stores operated by Grassroots and scattered through the state.

Curaleaf's shares fell by 2.3% on Wednesday, a drop that was steeper than that of the broader stock market.