Please ensure Javascript is enabled for purposes of website accessibility
Log In Help Join The Motley Fool
Free Article Join Over 1 Million Premium Members And Get More In-Depth Stock Guidance and Research
By Lou Whiteman - May 6, 2020 at 3:33PM

Earnings missed expectations, but the pandemic is not damaging the company's reservation list.

Shares of Virgin Galactic (SPCE -1.48%) were up more than 12% on Wednesday following the company's first-quarter earnings report. The results fell short of expectations, but investors for now are focused on the potential of the business, and not its current results, and there was little in the report to make shareholders question the potential.

Virgin Galactic reported a first-quarter loss of $0.30 per share on revenue of $238,000, well short of analyst expectations for a $0.15 per share loss on revenue of $320,000. But given the company's market capitalization is about 11,000 times higher than those expected sales numbers, it's pretty clear that Virgin Galactic shares don't trade on current results.

Instead, investors were eager to see if the COVID-19 pandemic, and the subsequent fall in equity values, had an impact on demand for space tourism. 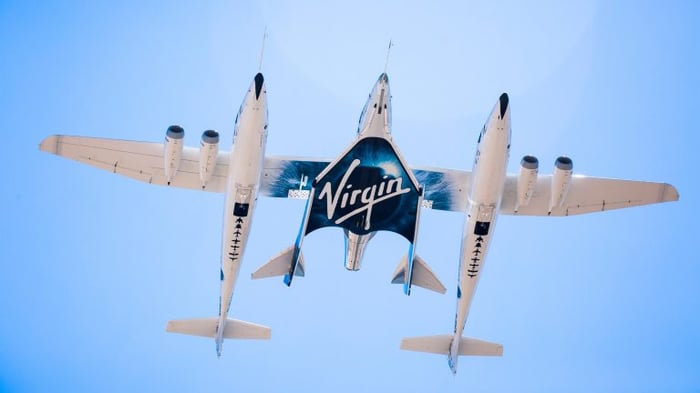 The company said demand for its service remains strong, booking more than 400 customer deposits via its "One Small Step" sales initiative. That represents about $100 million in potential future business. The bookings came from customers in 44 countries and will be added to Virgin Galactic's existing list of more than 600 reservations.

"We believe this response to our One Small Step initiative demonstrates the appetite for our product offering among new potential future astronauts," CEO George Whitesides said in a statement. "The COVID-19 outbreak led to an unprecedented situation for companies and individuals across the world, but I am encouraged by the commitment displayed by our team in helping to support relief efforts while making program progress. We remain focused on our strategic goals and our path to commercial launch."

The company also said it had entered into an agreement with NASA to help develop long-distance high-speed travel.

How do you value a business like Virgin Galactic? It's more art than science for now, which might explain why the shares have soared to a high of $42.49 and hit a low of $6.90 since hitting public markets last October.

The company has said it hopes to begin commercial operations this year, with a goal of being profitable next year. That sounds great but given the bleeding-edge nature of its products and the high fixed costs of the business, it's advisable for investors not to get too locked in on those projections. It's also unclear what the overall demand for space tourism is, especially at $250,000 per ticket.

I personally remain skeptical whether this will ever be a sustainable business, and not just a billionaire's vanity project. But as Virgin Galactic attempts to add new technologies like hypersonic travel to its arsenal, as well as its business launching suborbital unmanned missions, its chance of success does grow slightly higher. If nothing else I'd advise keeping Virgin Galactic as a small, speculative piece of a larger portfolio, and not a core part of your retirement plan.