Please ensure Javascript is enabled for purposes of website accessibility
Log In Help Join The Motley Fool
Free Article Join Over 1 Million Premium Members And Get More In-Depth Stock Guidance and Research
By Donna Fuscaldo - May 6, 2020 at 7:47AM

Facebook is trying to displace Zoom as the leader in videoconferencing as it seeks a way into the lucrative enterprise market.

The social media giant is going after Zoom with the launch of Messenger Rooms, a free videoconferencing platform that supports as many as 50 participants at one time. With millions of people sheltering in place and working from home becoming the new normal, whoever wins in the videoconferencing market stands to benefit over the long run. Even if Facebook doesn't make money off of it, the data it can glean can help influence future products.

It's early in the game for Facebook, which has stumbled before with new product launches and has failed to break into the enterprise market like Zoom has. But with a ton of cash, more engaged users because of the pandemic, and a stated goal of leading in video, the tech stock may have a shot at displacing Zoom. 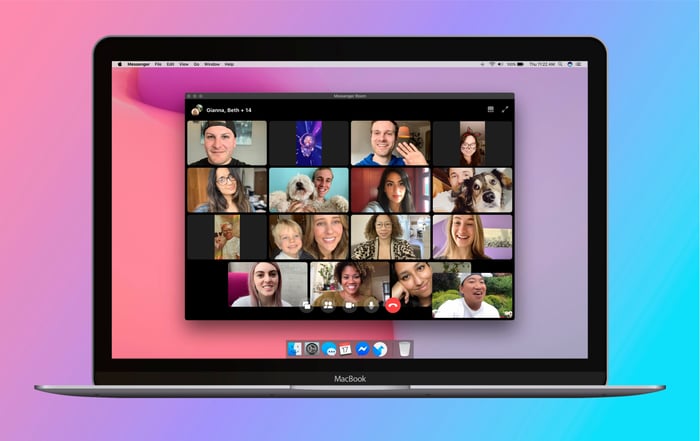 Prior to the pandemic, Facebook had been eyeing video as one of its next bastions of growth. That's taking on more urgency amid COVID-19.

Facebook views video in three distinct categories: video calling, video room, and live video where events are streamed in real-time. Video chat is driving a lot of the growth, with more than 700 million people participating in calls daily. Facebook expects that to increase now that it's doubling the number of possible participants in WhatsApp video calls to eight people. Live video is also growing with live events across the world called off. Facebook said more than 800 million daily active users are engaging with live streams on its platforms during the pandemic.

As for video rooms, Facebook is just getting its Zoom alternative off the ground. It's banking on Messenger Rooms resonating the same way the other video offerings have.

With Messenger Rooms, users create a room and send friends a link to join. They can also list their rooms on Facebook, enabling drop-in visits. The video conferences are free and Facebook isn't putting any caps on the amount of time conferences last.

Messenger Rooms is launching first on Facebook and through Messenger, and will eventually land on Instagram Direct, WhatsApp, and Portal, its videoconferencing device. Once that happens, potentially billions of people will have access to this free videoconferencing tool. After all, Facebook boasts 2.6 billion monthly active users across its platforms. The more they're engaged, the more advertisers will be willing to spend with Facebook to reach that audience and hopefully land them as customers.

Facebook is also trying to differentiate Messenger Rooms from Zoom by requiring no commitment on the part of meeting participants. There's no app to download, and participants aren't required to become a Facebook user to take part in a virtual meeting. That presents an opportunity for Facebook to cheaply target people who aren't on the social media platform. Just one meeting may be all it takes to land a new user.

A rocky history in the business market

Free customers, although they may become Facebook users, aren't what the social media giant needs to really displace Zoom. It has to win over corporations, which may not be that easy if its history provides any evidence.

A few years back the social media giant set its sights on displacing Slack (WORK) with Workplace, but its offering failed to take off in the same way Slack did. In October, Facebook said 3 million users were paying for its service -- just half of the 6 million paying customers Slack had at the time.

In a high-profile blow to Facebook's efforts to break into the corporate market, CERN, the European Organization for Nuclear Research, announced in late January that it was ending its trial of Workplace, citing changes the service's pricing. With Facebook now going after free Zoom users, rather than paying ones, it's not clear how Messenger Rooms will help it branch further into the enterprise market.

Facebook does have a ton of cash it can pour into the effort, ending the first quarter with $60.29 billion, up 33% year over year. Since then, the company spent $5.7 billion to purchase India's Jio Platforms and $5 billion to settle with the Federal Trade Commission over its privacy practices. That still leaves a sizable chunk to spend on product launches and enhancements including video.

Just because Facebook has clear advantages over Zoom doesn't mean the contest will be smooth sailing for the social media giant. Facebook doesn't have the best reputation when it comes to protecting customers' privacy, which could prevent people from using Messenger Rooms. Zoom has its own troubles on that front, but questions about Facebook's ability and desire to protect user data have long roiled lawmakers, privacy groups, and regulators.

Facebook is trying to assuage those concerns, vowing not to watch or listen to audio or video calls whether they originate from a Facebook customer or someone joining the call as a guest. To prevent hackers from infiltrating a room, Facebook is using links composed of a random combination of characters, digits, letters, and numbers.

If Messenger Rooms manifests the same security issues that hurt Zoom, it may fail to usurp Zoom's leadership status. But if it succeeds, there's a real chance Facebook could be the one to knock Zoom off its perch. Gaining the top spot in videoconferencing could give Facebook a new way to diversify its business, keep users engaged, land new ones who enjoy the Messenger Rooms experience, and leave advertisers clamoring for access to its platforms -- all of which would likely bode well for its bottom line and its stock.

Randi Zuckerberg, a former director of market development and spokeswoman for Facebook and sister to its CEO, Mark Zuckerberg, is a member of The Motley Fool's board of directors. Donna Fuscaldo has no position in any of the stocks mentioned. The Motley Fool owns shares of and recommends Facebook, Slack Technologies, and Zoom Video Communications and recommends the following options: short May 2020 $120 calls on Zoom Video Communications. The Motley Fool has a disclosure policy.