Please ensure Javascript is enabled for purposes of website accessibility
Log In Help Join The Motley Fool
Free Article Join Over 1 Million Premium Members And Get More In-Depth Stock Guidance and Research
By Timothy Green - May 7, 2020 at 4:00PM

Sales slumped more than 20% in the first quarter, but the denim company is expecting a rebound later this year.

Kontoor Brands (KTB 1.18%), the denim company behind the Wrangler and Lee brands that was spun off from V.F. Corp. last year, has been hit hard by the pandemic. Kontoor depends on its wholesale channel for the bulk of its sales, so temporary store closures have wreaked havoc on the company's results. Along with other measures, Kontoor is suspending its dividend to free up cash.

First-quarter revenue slumped 22% to $504 million, missing analyst estimates by $18 million. Adjusted earnings per share of $0.27 beat expectations by $0.05, but that compares to EPS of $0.96 in the prior-year period.

Sales in February were in line with the company's expectations, even as the pandemic impacted Kontoor's business in China. The situation deteriorated in March, with sales slumping due to stay-at-home orders and store closures in the U.S. and Europe. About 85% of Kontoor's revenue comes from the wholesale channel.

Weak sales continued into April, although the digital business has showed signs of life. Digital sales rose by 10% in the first quarter, with U.S. digital wholesale revenue soaring 41%. Kontoor said that volumes to its largest customers have been reduced but that sales to most of them are continuing. 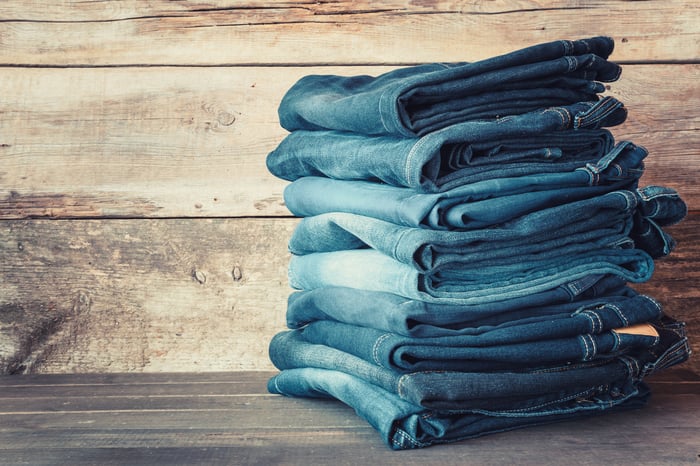 Kontoor outlined some steps it's taken to strengthen its balance sheet. The company drew down $475 million from its revolving credit facility, and it amended the terms to provide future relief from covenants. Kontoor ended the first quarter with $479 million in cash and cash equivalents, as well as nearly $1.4 billion in debt.

As part of the amended credit agreement, Kontoor is suspending its dividend temporarily. The company won't pay dividends for the second or third quarters. After the third quarter, Kontoor can resume dividend payments if certain conditions are met. The company is committed to reestablishing the dividend as soon as possible.

In addition to the dividend suspension, which will free up about $32 million each quarter, Kontoor has reduced salaries for senior management; reduced fees for the board of directors; furloughed some employees in retail stores, distribution centers, and offices; suspended merit pay increases; and implemented operating and capital spending savings initiatives.

Kontoor didn't provide an outlook due to the uncertainty surrounding the pandemic. The company expects negative impacts on revenue and earnings to be at their worst during the second quarter, but it expects improvements in the second half due to distribution gains. A new distribution program with North American partners will put the Lee brand in more than 2,000 stores during the third quarter, and the Wrangler brand will find its way into 400 stores of a European retailer later this year.

Kontoor is a slow-growing company at best, so the dividend was a key reason to own the stock. The company's results will get worse before they get better, but it has enough cash to survive for a while, and its brands are popular, if not particularly trendy. Kontoor looks like a reasonable comeback play, especially with the stock more than cut in half from its 52-week high. However, a deep, long recession could certainly threaten the company's survival.