Please ensure Javascript is enabled for purposes of website accessibility
Log In Help Join The Motley Fool
Free Article Join Over 1 Million Premium Members And Get More In-Depth Stock Guidance and Research
By Jeremy Bowman - May 7, 2020 at 10:44AM

Business has plummented during the pandemic, but if the economy bounces back, so should the ridesharing company.

Its a tough time to be a ridesharing company. With air travel decimated, corporate America working from home, and restaurants and bars closed, the use cases for companies like Lyft (LYFT -1.18%) have essentially evaporated during the pandemic.

That spoiled what would have been a strong quarter for the #2 ride-hailing operator, as the company finished the first quarter with revenue up 23% to $955.7 million. Lyft also beat its own guidance on Adjusted EBITDA in spite of the headwinds from COVID-19, posting an adjusted EBITDA loss of $85.2 million -- which was better than its own guidance of a $140 million-$145 million loss, and a significant improvement from a loss of $216 million a year ago.

The better-than-expected results and management commentary helped lift the stock in after-hours trading, but the update also laid out the challenges Lyft faces. 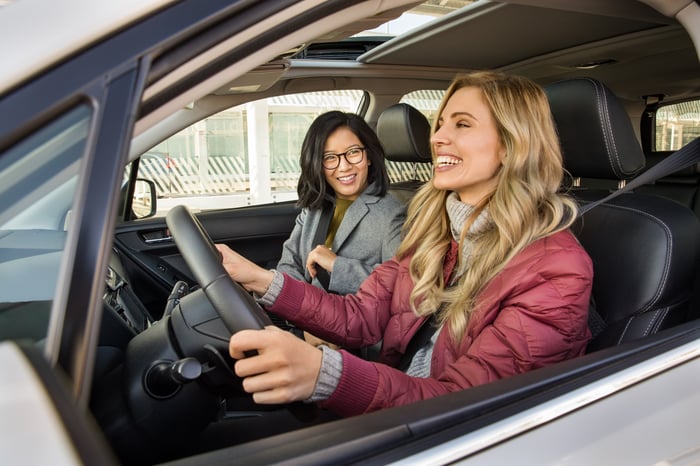 Management said the company began to experience a sharp decline in rides in mid-March, and that that persisted through April as rides plunged 75% during the month. There was a modest recovery after rides hit bottom in the second week in April, but they were still down 70% in the week ending May 3. That indicates that any recovery is likely to be slow, even as states start to reopen their economies. Changes that are likely to have more impact on Lyft's ridership, like office workers returning, restaurants and bars reopening, and air travel picking up will come later.

To manage through the crisis, Lyft is slashing costs, trimming fixed operating expenses by an annual run rate of $300 million, and lowering capital expenditures by $250 million to $150 million from an original target of $400 million. Last week, the company said it laid off approximately 17% of its workforce, or 982 employees, and furloughed 288 employees. Additionally, it is cutting salaries of remaining employees between 10% and 30%. Those moves will account for much of the cost reductions in operating expenses.

Though Lyft is clearly being challenged by the pandemic, the company's balance sheet should help it weather the storm, as it has $2.7 billion in cash and short-term investments and almost no debt. Even if rides remain down significantly, the company should not need to raise any cash for several quarters.

Roberts also said that with the company's new cost structure, it would be able to reach adjusted EBITDA with a ride volume that was 15%-20% lower than it had originally projected. Earlier the company had set a goal of reaching adjusted EBITDA profitability by the end of 2021, when annual revenue was expected to be around $6 billion. Based on that guidance, Lyft should be able to reach adjusted EBITDA profitability on revenue of around $5 billion. Last year, its revenue reached $3.6 billion.

For investors bullish on an economic recovery, Lyft could be a good way to play it. The stock is still down more than 40% from where it was before the pandemic started, and its business should recover as the economy opens up and things normalize.

There's still a lot of uncertainty around that, and management acknowledged that the biggest variable in its recovery would be the effects of the pandemic. However, the ridesharing company has $2.7 billion in cash and equivalents as a safety net, and a slimmed down cost structure following the recent layoffs. If the worst of the outbreak is truly behind us, Lyft stock should steadily climb higher.