Please ensure Javascript is enabled for purposes of website accessibility
Log In Help Join The Motley Fool
Free Article Join Over 1 Million Premium Members And Get More In-Depth Stock Guidance and Research
By Rick Munarriz - May 8, 2020 at 9:28AM

One of last year's hottest stocks is proving mortal after the company posted first-quarter results. Let's break it down.

A lot of stocks have been moving this earnings season, and on Friday, it was Roku's (ROKU 3.92%) turn to get going. Roku shares initially moved sharply lower after the digital streaming pioneer delivered its first-quarter results.

The numbers were generally solid at first glance, but obviously the market wasn't satisfied with Roku's financial performance. Let's go over the reasons investors cooled on Roku this earnings season. 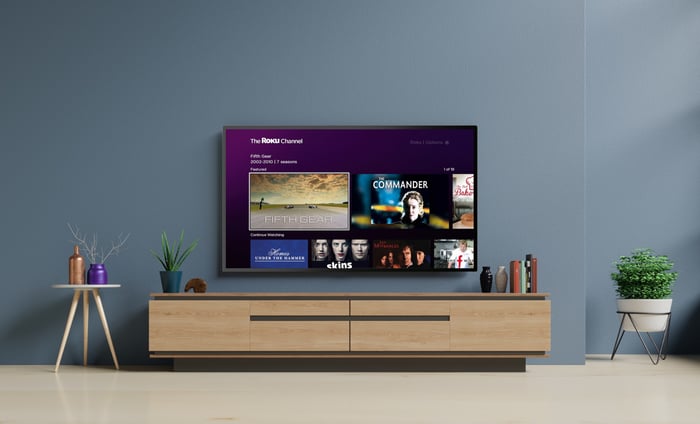 1. Most of the good news was old news

There were a lot of impressive numbers in Roku's report. Net revenue soared 55% to clock in at $321 million. Its platform had 39.8 million active users at the end of March, a 37% year-over-year advance and 2.9 million more accounts than it was servicing when the quarter started. Engagement was off the charts again, as the 13.2 billion hours streamed through Roku during the first three months of this year was 49% ahead of the prior year's pace.

This is the kind of growth that should impress investors, but they already knew most of these positive metrics. Roku announced preliminary results three weeks ago. The market was well aware of the 39.8 million active accounts and the 13.2 billion hours that they streamed. Roku didn't offer up that average revenue per user (ARPU) would check in at $24.35 for the trailing-12-month period, but it was more than implied given that revenue growth was outpacing user gains.

Net revenue in its April 13 update was pegged to land between $307 million and $317 million, a 49% to 53% year-over-year increase. Roku managed to land a bit above the high end of that range with its 55% ascent, but it's common for companies to offer up conservative guidance that they know they could top slightly with the actual numbers.

2. Some of the bad news was new news

The initial wave of headlines explaining the stock's post-earnings dip talked up the huge quarterly deficit, but those shots aren't fair. Roku's net loss actually clocked in at the kinder end of its mid-April guidance, which was bracing investors for a $55 million to $60 million hole. Its adjusted EBITDA deficit of $16.3 million was actually better than its earlier forecast.

There were still some new comments that could be interpreted as negative. Roku dove deeper into the challenges on the advertising end, a big driver of its ARPU growth in the past. Roku expects some marketers to "pause or reduce" their ad spending on the platform in the near term. Ad cancellations were particularly pronounced in late March through mid-April.

It's also not exactly a surprise that the average selling price of its devices declined 7% since the prior year. Everyone is beefing up promotional efforts to get their streaming hardware into homes. One analyst during the subsequent earnings call raised concerns about market saturation with Roku now at nearly 40 million accounts, but the company responded by pointing at the much larger global opportunity.

3. The stock had already been on a tear

Roku has been one of the many stocks to feverishly bounce back since the market correction that smacked equities around in the final week of February and for most of March. Roku stock has more than doubled -- up 136% -- since bottoming out in mid-March.

Even if we draw the starting line back to its April 13 preliminary results update, the shares have soared 42% in a little more than three weeks through Thursday's close. An elevated stock often translates into elevated expectations.

Investors have been bidding up the stock as a beneficiary of the shelter-in-place mandate that's keeping folks home during this coronavirus crisis. We're hungry for entertainment, and Roku is there now serving up more than a billion hours of content a week. Of course, the stock wasn't going to move up perpetually. There will be pullbacks, even when the news is largely positive as it was in Thursday's report. The stock pulled back sharply after more than quadrupling in 2019, and a setback now isn't a concern. Roku still has a thriving model that's built to accelerate in the new normal. The stock should bounce back.