Please ensure Javascript is enabled for purposes of website accessibility
Log In Help Join The Motley Fool
Free Article Join Over 1 Million Premium Members And Get More In-Depth Stock Guidance and Research
By Jim Crumly - Updated May 8, 2020 at 5:10PM

Researchers from the University of Washington School of Medicine found that the blood test for SARS-CoV-2 antibodies recently launched by Abbott Laboratories (ABT 0.09%) is highly accurate in detecting antibodies in patients tested at least 17 days after the onset of symptoms. The results found the test has 99.9% specificity, or about one false positive out of a thousand healthy patients, and 100% sensitivity, or a complete lack of false negative results in patients confirmed to have had COVID-19.

The research was performed in Boise, Idaho, as part of an initiative called "Crush the Curve," sponsored by local businesses. The researchers tested 1,020 blood samples that were collected before COVID-19 arrived in the U.S. and found one false positive. They also tested 689 blood samples from 125 patients who had been confirmed to have COVID-19, and those tests returned positive results 100% of the time. 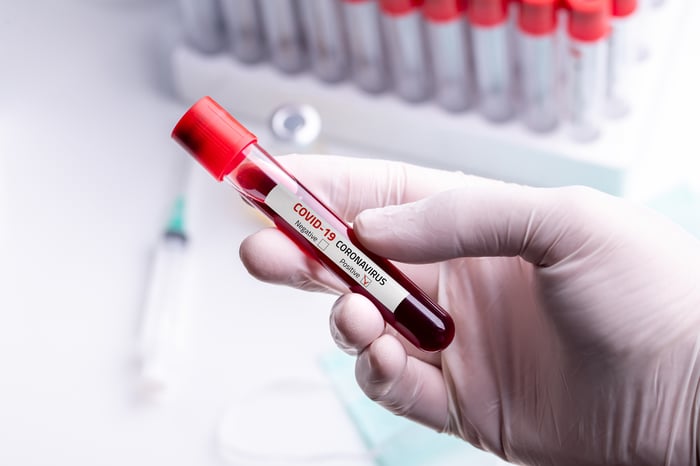 Abbott launched the test for the SARS-CoV-2 IgG antibody for its Architect laboratory-based testing system on April 15, and it was granted emergency use authorization by the Food and Drug Administration on April 26. The test detects a specific protein the body produces in the late stages of a COVID-19 infection, one which may remain in the bloodstream for months and possibly years after the patient recovers. Scientists don't yet know if the antibody confers immunity to COVID-19, but widespread antibody testing is required in order for governments and the medical community to measure the prevalence and spread of the disease.

Abbott has already shipped 10 million antibody tests for its Architect platform and plans to ramp up production capacity to 20 million tests a month in June. The Crush the Curve Idaho initiative -- which only tests people who think they may have had COVID-19 and recovered -- has tested over 10,000 individuals in the Boise area, with 0.71% of them returning positive results.