Please ensure Javascript is enabled for purposes of website accessibility
Log In Help Join The Motley Fool
Free Article Join Over 1 Million Premium Members And Get More In-Depth Stock Guidance and Research
By Rick Munarriz – May 8, 2020 at 9:20AM

Disney Springs will initiate a phased reopening in less than two weeks. It's the first step before Disney World's eventual revival.

Just two days after announcing that The Walt Disney Company (DIS 2.97%) is reopening Shanghai Disneyland, we're seeing the first signs of life closer to home. The theme park giant revealed on Thursday afternoon that it's going to partly reopen the Disney Springs shopping, dining, and entertainment complex at its Florida resort on May 20.

Disney World's theme parks are likely weeks, if not months, away from resuming operations, but this is the first time since mid-March that the industry bellwether will be generating actual revenue from its largest resort. It won't be a full reopening for Disney Springs. Only a limited number of third-party merchants and restaurants will be available in this first phase of the outdoor mall's revival. Disney's massive fleet of themed hotels will remain closed for the time being. However, every journey begins with a first step -- and for Disney's pivotal domestic theme park operations, that step is now less than two weeks away. 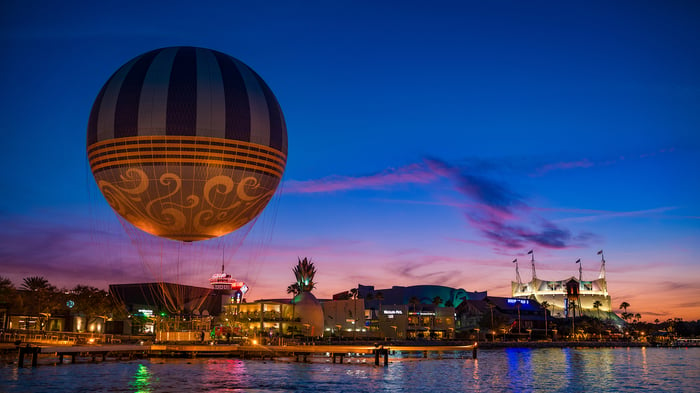 If a partial reopening of a resort's entertainment hub ahead of Disney's other offerings sounds familiar, it's because we saw the same scenario play out in China. Shanghai Disney had a phased reopening of its Disneytown complex in March, and here we are two months later with the Shanghai Disneyland park set to become the first Disney gated attraction to reopen come Monday of next week.

It would be silly to compare China's timeline to the situation here, which would peg a late July restart to Disney World itself. This remains a fluid situation, and if new COVID-19 cases spiral out of control in states that have recently launched economic recovery efforts, we could see the gradually unwinding leash drawn in fairly quickly.

Disney World might open as early as June, and it would be a surprise if the resort isn't open in at least some restricted capacity at some point this summer. The Wall Street worrywarts that were modeling a 2021 return have missed the Liberty Square Riverboat on this one. Disney wouldn't be initiating a phased reopening of Disney Springs this week if it didn't see its theme parks and hotels following in the near future. A lot can happen between now and then, but the pandemic crisis would have to worsen substantially for Disney World, and eventually Disneyland, not to reopen -- and if that's the case we'll probably have a lot more pressing matters to discuss than simply why you can't take off on a Space Mountain coaster ride with a Dole Whip frozen treat.

A little Disney-inspired shopping and dining is now less than two weeks away. A less than ideal theme park opportunity will follow later, with the appropriate safeguards in place, but the new normal will have to do until consumers and investors alike get to return to the old normal.