Please ensure Javascript is enabled for purposes of website accessibility
Log In Help Join The Motley Fool
Free Article Join Over 1 Million Premium Members And Get More In-Depth Stock Guidance and Research
By Billy Duberstein - Updated May 8, 2020 at 9:07AM

But it should be manageable ... for now.

The Walt Disney Company (DIS -0.28%) reported fiscal second-quarter earnings this week, with predictable declines in earnings per share. This was led by a big profit decline in its parks division, where the operating income fell from $1.51 billion in the year-ago quarter to just $639 million last quarter.

Get ready, because you ain't seen nothing yet.

The last quarter showed only limited impact from COVID-19. While Disney shuttered its Asian parks earlier in the quarter, it still derives a vast majority of parks revenue from domestic parks and cruises. Disney World only closed on March 16 and California's Disneyland closed down on March 14, so there was only a two-week period of closures for these parks last quarter.

However, if Disney's parks stay closed through the current quarter ending in June, that minimal profit will turn to a loss -- and potentially, a big one. 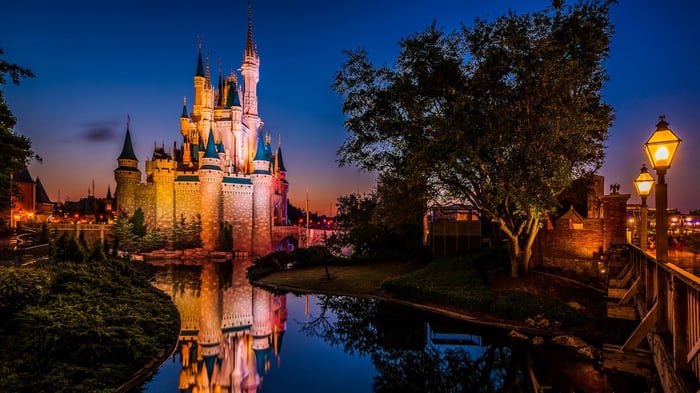 The costs of running parks

One can extrapolate the quarterly cash costs of running Disney's parks by subtracting its segment operating income from revenue. While Disney may have had lower-than-normal costs from shuttering its Hong Kong and Shanghai parks in late January, with Japan following in February, then Paris, Orlando, and Anaheim in March, Disney continued to pay all of its park workers -- at least in the U.S. -- through the end of the quarter.

As you can see, the costs of the parks looks to be nearly $5 billion, or $3.75 billion ex-depreciation, up from $3.58 billion in the prior-year quarter. I've excluded depreciation because these are non-cash costs, though there may be some maintenance expenditures that could push that figure even higher.

The "parks and cruise-only" costs might not quite be as high as these figures, however, because it's unclear how much of those costs come from products, which is also included in the division. However, it seems that parks and experiences account for a vast majority of these costs, given their size and 100,000-plus workers.

Disney was paying all employees through April 19, so it will achieve some savings from furloughing these employees in the second quarter. However, while on furlough, all of the reportedly 100,000-plus furloughed workers will remain employees of Disney, which will pay for their healthcare benefits during that time.

It's unclear how much Disney will ultimately save from furloughing employees. Likely, it will be significant, but the fact that Disney kept all park workers on the payroll through the first three weeks of the quarter and continue to pay benefits means that the savings will only be a partial amount of the roughly $3.75 billion in cash costs.

Still, even if Disney saves say, two-thirds of this amount on furloughed salaries -- and that may be generous -- the parks division is still set to lose over $1 billion per quarter in cash outflows if the parks remain shuttered. That will likely swing Disney to a significant loss -- it only made $1 billion in operating income last quarter, and that was with 2 1/2 months of normal operations in the U.S. before COVID-19 hit. The parks reversal from profit to losses by itself could turn Disney's operating income negative, not to mention little revenue from the studio division and lower results from media networks with a lack of live sports.

Disney isn't in danger of running out of cash -- at least not for the foreseeable future. At quarter-end, it had $14.4 billion in cash, with another $17.25 billion available in revolving credit facilities. Still, if the lockdown of Disney World lasts for the rest of 2020 and the company loses $1 billion or maybe even $2 billion per quarter, things could get dicey.

When can Disney reopen and how?

On the conference call following the earnings release, analysts posed the question as to when, and at what capacity, Disney may open its parks back up. Disney has received permission to reopen Shanghai Disney soon, but the Chinese government is apparently only allowing the park to open at 30% capacity, with everyone wearing masks.

That puts Disney's management in a strange position. On the call, they said they wouldn't open its parks unless they were able to get a positive operating margin. Yet it's hard to imagine Disney World would be profitable at 30% capacity, especially if it had to be fully staffed and with added safety protocols. Likely, Disney will be using Shanghai as a test to inform its reopening of the bigger parks later on.

I don't envy new CEO Bob Chapek, who will have some difficult decisions to make. If the parks remain closed for an extended period, Disney will continue to bleed cash. On the other hand, if it opens at lower capacity, Disney will have to bear the costs of running the park and may continue to lose money. Yet if bigger crowds lead to another outbreak, management could come under fire, and Disney's brand could take a hit.

Basically, investors should brace for some bad results and stagnant stock price for Disney in the immediate future. However, the important thing is for Disney to maintain its brand and standing as a good corporate citizen. If management does that, the company should thrive once we're past the pandemic -- whenever that may be.