Please ensure Javascript is enabled for purposes of website accessibility
Log In Help Join The Motley Fool
Free Article Join Over 1 Million Premium Members And Get More In-Depth Stock Guidance and Research
By Rhian Hunt – May 8, 2020 at 12:54PM

The 118-year-old company struggles with the fallout from COVID-19.

Achieving at least one sunny outcome amid a storm of troubles, department store giant JCPenney (JCPN.Q) managed to come to a new accord with its partner Sephora, a beauty and wellness products company owned by LVMH. However, a fresh hurdle looms as JCPenney continues to mull declaring bankruptcy, possibly as soon as next week.

As recently as Wednesday, Sephora was trying to end its partnership with JCPenney and threatening to halt resupply of product. Sephora's beauty and skincare products are a significant revenue source for the department store, leading JCPenney to seek and obtain a restraining order on April 27 preventing its partner from closing Sephora locations inside its stores. 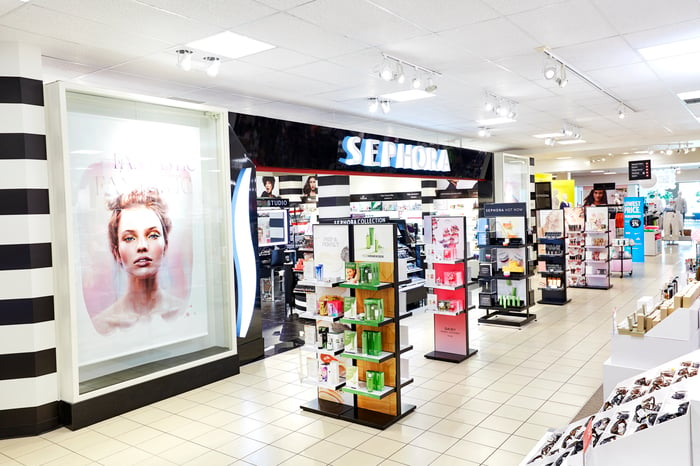 Yesterday JCPenney issued a brief press release indicating the two companies have ironed out their differences and will continue their alliance. The statement remarks that JCPenney and Sephora "worked constructively to resolve outstanding legal matters and have agreed to mutually beneficial revisions to their joint enterprise operating agreement."

Nevertheless, JCPenney may still be forced into bankruptcy by an upcoming debt payment. The company currently owes approximately $4 billion, and has two payments coming due in the next few days, according to Reuters. It must pay a $12 million sum on May 15 for a payment it postponed for 30 days on April 15, and owes an additional $17 million which must be paid by May 12. Missing either payment will put the retailer into default.

While declaring bankruptcy and closing a quarter of its 850 stores might appear the most likely outcome, closely involved sources say that the final decision hasn't been made yet. The company is still exploring its chances of obtaining new financing or of striking a deal with creditors that doesn't require going bankrupt.