Please ensure Javascript is enabled for purposes of website accessibility
Log In Help Join The Motley Fool
Free Article Join Over 1 Million Premium Members And Get More In-Depth Stock Guidance and Research
By Joe Tenebruso - Updated May 8, 2020 at 5:17PM

The plant-based food provider's sales are growing rapidly during the coronavirus crisis.

Shares of Beyond Meat (BYND 6.03%) climbed nearly 9% on Friday, continuing their sizzling gains since the plant-based meat substitute company released its earnings report on Tuesday.

Despite the affects of the COVID-19 pandemic, which forced many restaurants to close, Beyond Meat's net revenue soared 141% year over year to $97.1 million in the first quarter. 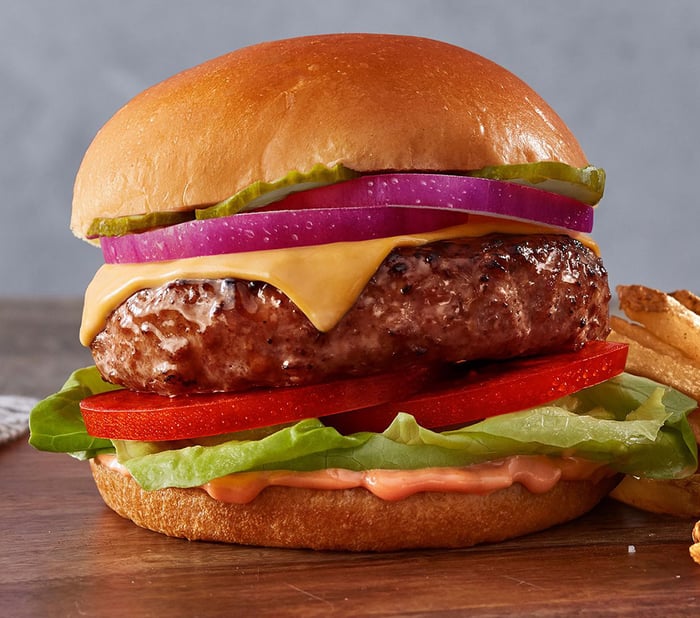 The Beyond Burger. Image source: Beyond Meat.

Sales to grocery stores are helping Beyond Meat offset lost sales to restaurants. And now, as states begin to relax stay-at-home orders and reopen their economies, investors are hopeful that Beyond Meat's restaurant-based sales will begin to rebound.

Moreover, supply chain disruptions in the meat industry could lead more major food retailers to strike deals with Beyond Meat. The plant-based food producer announced a blockbuster deal with Starbucks in April that will bring its products to the coffee titan's stores in China. Analysts believe more deals could be on the horizon, including a potential partnership with McDonald's.