Please ensure Javascript is enabled for purposes of website accessibility
Log In Help Join The Motley Fool
Free Article Join Over 1 Million Premium Members And Get More In-Depth Stock Guidance and Research
By Royston Yang – Updated May 8, 2020 at 11:24AM

The restaurant chain's digital efforts are starting to yield results.

The stock is now slightly up year to date and has risen a whopping 89% from the low of $465 in mid-March. 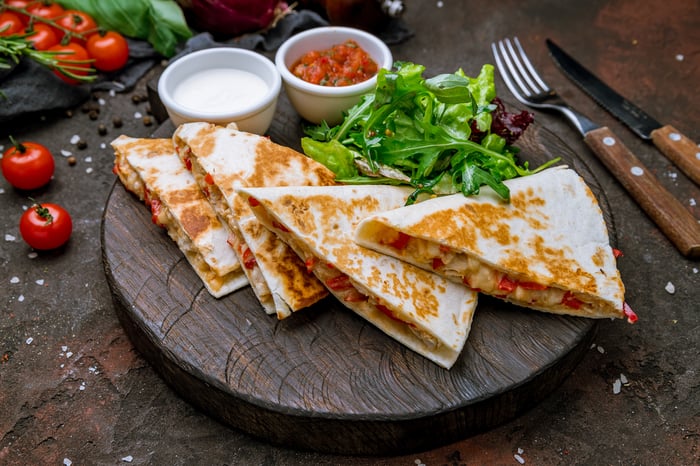 The COVID-19 pandemic has resulted in many restaurant chains having to shut their outlets completely or accept drive-thru and takeout orders, as lockdowns and tough social-distancing measures keep people at home. But for Chipotle, only around 100 restaurants are temporarily closed, and these are mainly inside malls and shopping centers. The closures represent just 3.8% of the company's total restaurant count of 2,638 as of March 31.

CEO Brian Niccol said on the company's recent conference call that the majority of Chipotle's restaurants are open for takeout. The company had spent two years putting its digital platform in place and is now successfully leveraging it to generate sales during the pandemic. For the first quarter, digital sales were up a stunning 81% year over year to $372 million and represented 26.3% of total sales.

In mid-March, Chipotle joined with Uber Eats to announce a national delivery partnership. This move will increase the number of customers who can order the restaurant chain's burritos and tacos from their own homes. Chipotle's rewards program now has more than 11.5 million enrolled members, and daily sign-ups have spiked nearly fourfold in the last month. Of these sign-ups, 65% are new to the company, which demonstrates Chipotle's success in increasing its presence using its digital platform.

Chipotle is being priced for growth, but it's not unusual to see why. Management had astutely focused on building and growing its digital presence over the last couple of years, and these efforts are now bearing fruit.

While other restaurant chains struggle with getting their act together as the pandemic continues its rampage, Chipotle is sitting in a sweet spot by leveraging technology to boost digital sales and increasing its new sign-ups. The company also has announced a 10% increase in the hourly rate for employees and set aside discretionary bonuses of $7 million for staff who are willing and able to continue work. This show of appreciation is a shining example of a company that values its employees' contributions.