Please ensure Javascript is enabled for purposes of website accessibility
Log In Help Join The Motley Fool
Free Article Join Over 1 Million Premium Members And Get More In-Depth Stock Guidance and Research
By Jeremy Bowman – May 8, 2020 at 4:29PM

The travel-recommendation stock slipped on dismal guidance on its first-quarter earnings report.

Shares of TripAdvisor (TRIP -0.36%) fell as the travel-recommendation company revealed its first-quarter results and management shared its thoughts on the future during a very challenging time for the travel industry . Though the company posted a profit in the quarter, that was not enough to persuade investors to return to the stock, as the company's financial performance is being deeply impacted by the COVID-19 pandemic. 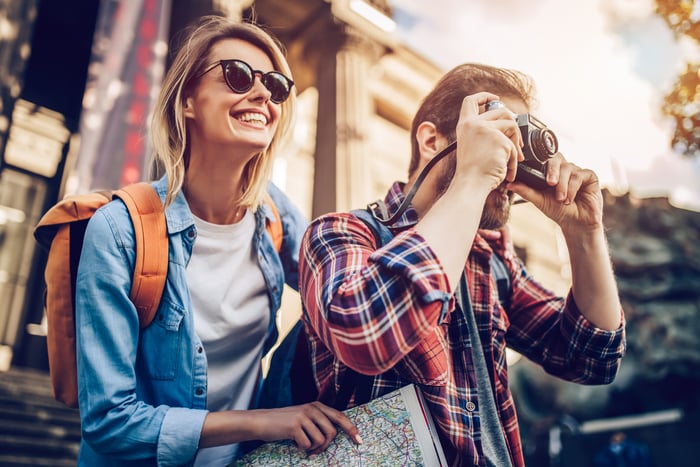 TripAdvisor's revenue plunged 26% in the quarter to $278 million, which was significantly worse than estimates at $317.1 million. Adjusted earnings per share shrank from $0.36 to $0.07, which also badly missed expectations at $0.21.

Daily bookings and revenue plunged more than 90% in late March and April, showing that the travel industry has virtually disappeared while shutdown orders have been in effect. CEO Steve Kaufer assessed the challenges facing the company, saying, "We believe we are currently going through the darkest days. We remain confident that travel will rebound and that demand for our products and services will recover."

In order to cut costs, the company has laid off 700 employees and expects to let go of another 200, and it also furloughed 850 employees, dismissing nearly half of its workforce in total. For most of its remaining employees, it reduced work schedules and pay by 20%.

The travel-search site finished the quarter with $798 million in cash, which included drawing down $700 million from a credit facility.

Management did not give detailed guidance and said that second-quarter results would be materially worse than the first quarter. It projected little-to-no revenue in the second quarter and significantly negative earnings before interest, taxes, depreciation, and amortization (EBITDA). It expects some revenue improvement in the third quarter with negative EBITDA persisting at least through the third quarter.

With roughly half of its expenses coming from sales and marketing, TripAdvisor has high variable costs, making it easier for the company to conserve cash and survive the crisis. Management remains optimistic about the long term, saying, "The near term remains unpredictable but time and again, we have seen the travel, hospitality and tourism industries recover and thrive."

Nonetheless, the foreseeable future is going to be difficult.