Please ensure Javascript is enabled for purposes of website accessibility
Log In Help Join The Motley Fool
Free Article Join Over 1 Million Premium Members And Get More In-Depth Stock Guidance and Research
By Billy Duberstein - Updated May 10, 2020 at 4:07PM

Investors love their dividends. But should they?

Many investors, specifically those near retirement, gravitate toward dividend stocks. For many, dividends provide a steady and, hopefully, rising income stream, no matter what's going on with the stock market.

Or so many think.

Of course, in the wake of the COVID-19 pandemic, many companies in travel and leisure, airlines, and oil and gas are cutting their payouts. Even the mighty Disney (DIS 1.84%) is suspending its next biannual dividend. It could do more.

However, the danger I'm talking about isn't related to the coronavirus. Once the virus subsides, dividend investors should also be aware of the big risk that applies to all dividend stocks, regardless of industry, debt levels, or payout ratio. 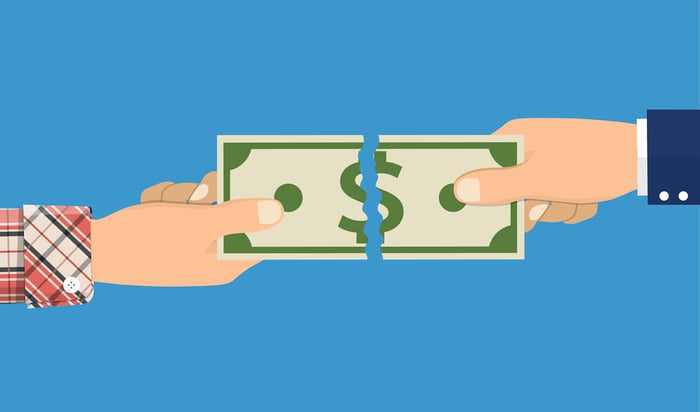 Once a company gets to a certain size and scale, it usually starts paying a dividend.  This typically happens after a company has achieved some success. As the good times roll on and the company grows, companies usually feel pressure to raise those dividends every year. If they don't, dissatisfaction among investors can grow. Management doesn't like disappointing investors, and many companies have declared their dividends sacrosanct. This is especially true once a business becomes a Dividend Aristocrat, a company that's raised its dividend annually for at least 25 straight years. Once you're anointed an Aristocrat, it's hard to be demoted to something less than!

However, there may come a point at which the dividend, which is a cash outflow to the business, becomes a burden rather than a bonus. While any one dividend payment is unlikely to change a company's trajectory, a high and growing dividend may cause a business to under-invest in its business over time.

In the worst case, under-investment can leave a seemingly "safe" company vulnerable to disruption. Disruption usually comes from young, hungry growth companies without dividend burdens that aim to reshape an industry in a new and better way.

Disruptive companies tend reinvest all profits -- and perhaps even more -- into the business. And if successful, disruptive growth companies can be such massive long-term winners that their returns more than make up for the lack of dividend, sometimes by staggering amounts.

There was once a time in which big media stocks were among the best, most-coveted companies in the world. These cable and broadcast companies receive affiliate revenues from distributors and advertising revenues from large companies looking to reach their massive audiences. That led to big-time growth in the 1990s and early 2000s, with high profits and dividends aplenty.

Then came Netflix (NFLX 2.90%), which disrupted the entire media landscape by introducing over-the-top, commercial-free internet streaming for a low monthly fee. While many of the legacy media companies were growing fat on their profits, and often paying dividends, Netflix instead reinvested all of its revenue into producing more and more content. In fact, not only did Netflix spend all its revenue, but it also spent more than that, taking on incremental debt to fund original content, while also paying hefty licensing fees to partners.

Legacy media were hesitant to disrupt their own highly profitable businesses, which allowed Netflix to gain a substantial head start. Now, it may be too late for others to catch up.

The result? Most legacy media companies have seen big declines in their share prices, while others have merged with large cable or telecom companies, basically "selling out" before things got worse. Meanwhile, Netflix's stock has gone on to trounce the competition. 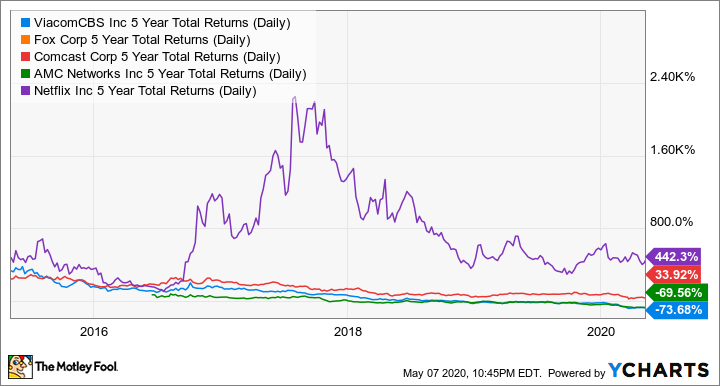 The same story has played out in the telecom space as well. For many years, the "big two" telecom networks of Verizon (VZ 1.75%) and AT&T (T 1.67%) enjoyed an effective duopoly, with the nation's two leading mobile networks. Their high and rising dividends also made them very popular safe-haven picks for retirees and other dividend investors.

Enter T-Mobile USA (TMUS 1.69%), the U.S. telecom majority-owned by Deutsche Telekom (DTEGY 1.16%). After a merger with smaller carrier MetroPCS in 2013, T-Mobile underwent a substantial rebranding campaign as the "Un-Carrier" under CEO John Legere. T-Mobile spent big on the customer experience, offering affordable plans and doing away with usual industry pain points, such as annual contracts, overage charges, and hidden taxes and fees.

Meanwhile, T-Mobile continued to invest heavily in its networks, never paying a dividend, bringing its quality closer and closer to par with the big boys. Now that T-Mobile was finally able to merge with fourth-place carrier Sprint, the combined company actually has a chance at leap-frogging the two leaders in the race to a superior 5G network.

In its just-reported quarter, T-Mobile continued to rack up market share gains, with 777,000 postpaid net additions and 7% branded postpaid revenue growth on top of 5% revenue growth. While not exactly a highflier, that represented about 70% of the entire industry growth during the quarter, and the 25th quarter in a row that T-Mobile has led the industry in net addition growth.

While you would have enjoyed the dividends from AT&T and Verizon over the past five years, T-Mobile's disruption would have led to even bigger overall gains. 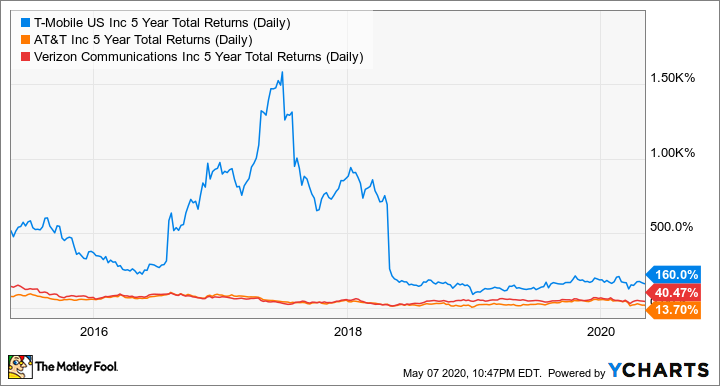 Finally, perhaps the most disruptive stock in the world is Amazon.com (AMZN 3.15%), which has gone on to disrupt not one but two large and profitable industries. The first is traditional brick-and-mortar retail, especially mall-based retail, which used to enjoy fat profit margins, big dividends, and buybacks.

However, Amazon led the e-commerce industry in building out a first-class online experience, including a huge selection of inventory and fast shipping times. This was all turbocharged by Amazon's Prime offering, which offered free two-day shipping on most goods for an annual subscription fee, which "locked" customers into its ecosystem.

Of course, offering low prices and high customer satisfaction cost a lot of money, and Amazon has never paid a dividend. In fact, in most years of its corporate life, Amazon either broke even or lost money. However, that didn't stop the stock from going on to greater and greater heights as it racked up more and more revenue and market share: 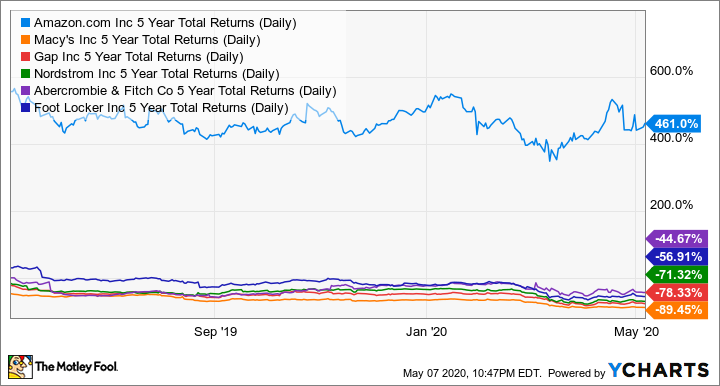 But Amazon wasn't content to disrupt only retail. Perhaps more consequential was Amazon's disruption of the enterprise technology space, specifically by inventing the concept of cloud computing. While high-touch consulting and on-premises technology management made traditional enterprise IT services a very profitable business, the public cloud has allowed enterprises greater flexibly, affordability, and access to the latest technology on a per-use basis. That's taken market share away from many big IT companies that used to "rule" enterprise IT and pay out large dividends, such as IBM (IBM -0.05%), Oracle (ORCL 1.43%), and Cisco (CSCO -0.09%). 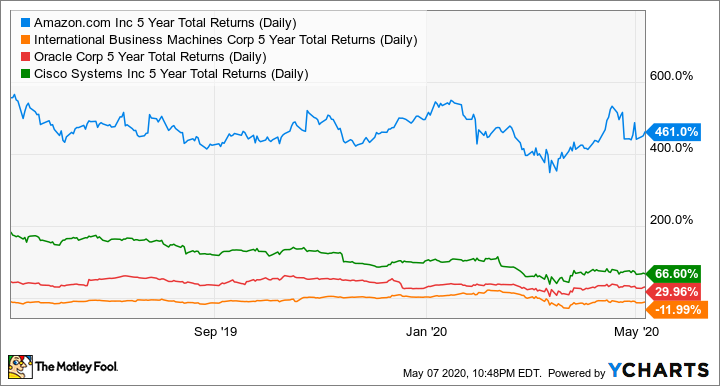 For those who say disruptive businesses don't ever make a profit, the Amazon Web Services cloud computing division just reported 33% growth, with operating margins above 30% last quarter, proving that even disruptors can be profitable, given enough time.

Even Berkshire Hathaway is looking to disrupt utilities

Longtime fans of Warren Buffett know that his conglomerate Berkshire Hathaway (BRK.A 1.69%) (BRK.B 1.64%) has never paid dividends. While the primary reason is to give Buffett and his partners as much capital as possible to make market-beating investments, the lack of a dividend also allows Berkshire's wholly owned subsidiaries to invest as much as they can or want without capital constraints.

One case in point is Berkshire Hathaway Energy, a subsidiary created when Berkshire bought MidAmerican Energy in 1999. Under Berkshire, MidAmerican has grown into an industry leader, often with superior service and lower prices than its competitors. In fact, in last year's annual letter to shareholders, Buffett informed shareholders that, thanks to huge past investments in wind energy, Berkshire's Iowa utility beats its main competitor's electricity rates by a stunning 70%!

At this year's annual meeting, Buffett and likely successor Greg Abel outlined another $100 billion of investment opportunity for Berkshire Hathaway Energy in the coming years, because of the need for updates energy infrastructure in the U.S. -- to which Buffett added (emphasis mine):

[W]e're better positioned than anybody in the energy business just because we don't have dividend requirements. We retained 28 billion of earnings over 20 years. You can't do it if you run a normal public company. And we've got a huge appetite, and the country needs it; the world needs it.

Don't ignore dividend stocks, but make sure they're protected

As these examples show, disruptive competitors without dividend burdens can make extraordinary gains for shareholders at the expense of incumbent dividend payers. In retrospect, you would have been better off buying any of these disruptors, and then perhaps selling a few shares every year instead of depending on regular dividend payouts. So that's another method to consider in lieu of a dividend strategy.

Of course, this doesn't mean you should ignore dividends altogether. After all, Buffett himself also owns a lot of dividend stocks. However, if you own a stock for its dividend, you need to ask if there are potential disruptive threats to the business, and if the business is making all the investments it needs to grow and adapt.

The main point is, dividends and dividend growth can't overcome superior business strategies and better customer experiences. So, dividend investors, make sure the companies in your portfolio provide these, whether they pay a dividend or not!