Please ensure Javascript is enabled for purposes of website accessibility
Log In Help Join The Motley Fool
Free Article Join Over 1 Million Premium Members And Get More In-Depth Stock Guidance and Research
By Cory Renauer – May 11, 2020 at 2:10PM

The company plans to ship 90 million of the laboratory-run blood tests for SARS-CoV-2 antibodies by the end of June.

The FDA on Monday authorized the use of a new antibody test that can determine who has been exposed to the coronavirus that has claimed the lives of at least 74,270 Americans to date. Wide deployment of Abbott's (ABT -1.50%) freshly authorized SARS-CoV-2 antibody test could help people safely return to some semblance of normal life sooner rather than later.

By the end of May, Abbott plans to ship 30 million new antibody tests worldwide, followed by 60 million more in June. As a global leader in the diagnostic space, Abbott probably won't have trouble hitting that target. 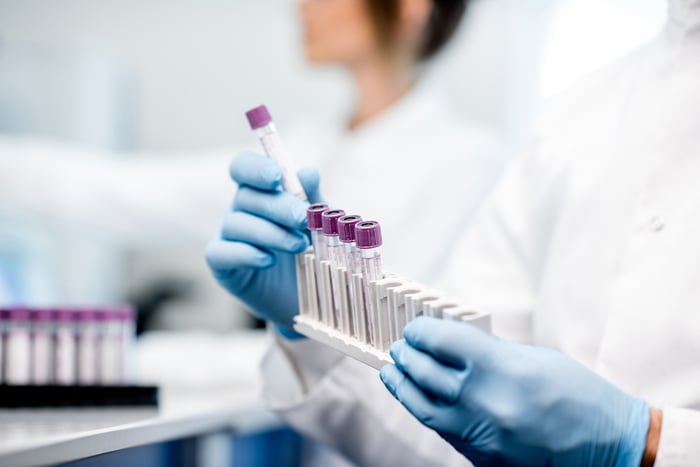 In places where governments and health systems have been able to test the population widely and perform contact tracing -- Taiwan, South Korea, Hong Kong, New Zealand, and Australia among them -- life returned to a semblance of normalcy weeks ago without any new uncontained breakouts to date. Sadly, the availability of such COVID-19 tests in the U.S. is as yet far from where it needs to be.

The COVID Tracking Project has counted almost 9 million tests run in the U.S. to date. That may sound like a lot, but it doesn't tell us how much demand to expect for Abbott's new antibody test. To know if enough people are being tested to spot new outbreaks and hotspots before they spread out of control, public health officials need to see the percentage of positive tests fall to the low single-digit percentage range.

During the week ended May 2, the CDC reported the percentage of tests returning positive results from public health and commercial laboratories fell to 13.2%. That's far too high to safely allow life to return to normal, but it's significantly lower than it was the previous week.