Please ensure Javascript is enabled for purposes of website accessibility
Log In Help Join The Motley Fool
Free Article Join Over 1 Million Premium Members And Get More In-Depth Stock Guidance and Research
By Rhian Hunt – May 11, 2020 at 6:56PM

The company’s recovery from the coronavirus is slow and difficult.

Despite a sizable stock market rebound in April, Hyatt Hotels (H -0.47%) announced in a press release today that it's terminating 1,300 employees on June 1 as part of a restructuring plan. While the terminations are referred to as "layoffs," the press release refers to the employees' eligibility to receive severance pay, making it clear these are permanent layoffs and not simply more furloughs.

Back in March, Hyatt furloughed or cut pay for approximately two-thirds of its workforce, responding to catastrophically nosediving demand for hotel rooms during COVID-19's near-shutdown of global travel. 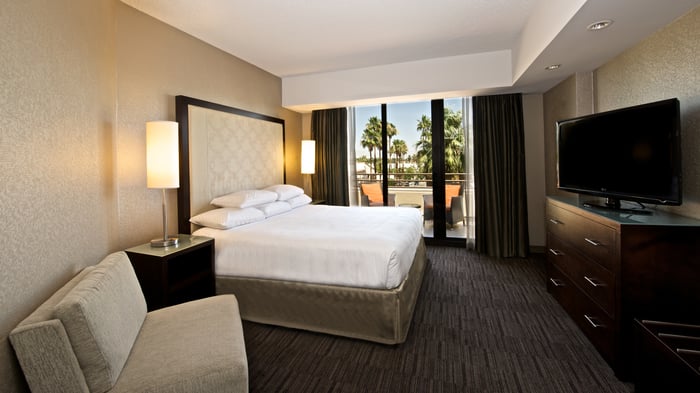 The combination of pay reductions for those still working and no pay for those furloughed, the latter urged to apply for unemployment benefits during their unpaid work hiatus, aimed to help the company maintain liquidity during the crisis. During the recent Hyatt Q1 earnings call, the company revealed that 103 employees have confirmed cases of COVID-19 so far, six have died, and hundreds more remain in quarantine in case they were exposed to the highly contagious virus.

Now, however, Hyatt notes the "slow pace of recovery" as calling for even more drastic financial measures to help it survive. The company is restructuring its operations worldwide to weather its currently reduced revenues and austere outlook, a global reshuffle including the layoffs announced today. In addition to severance, terminated employees may receive help finding new jobs through the company's "outplacement services."

President and CEO Mark Hoplamazian declared, "While parting ways with our colleagues is excruciating, we must be sensitive to commercial realities so we can continue to fulfill our purpose of care over the long term."