Please ensure Javascript is enabled for purposes of website accessibility
Log In Help Join The Motley Fool
Free Article Join Over 1 Million Premium Members And Get More In-Depth Stock Guidance and Research
By Daniel Foelber - May 11, 2020 at 10:16AM

As one of the largest U.S. midstream oil and gas companies, Kinder Morgan (KMI -2.36%) continues to plant the seeds that will grow its business of transporting and storing natural gas, oil, and other valuable products. Its current business is focused in North America, but Kinder Morgan has plenty of projects in the works to expand its international reach.

Let's determine the health of Kinder Morgan in the short term to better gauge the feasibility of its 10-year goals. 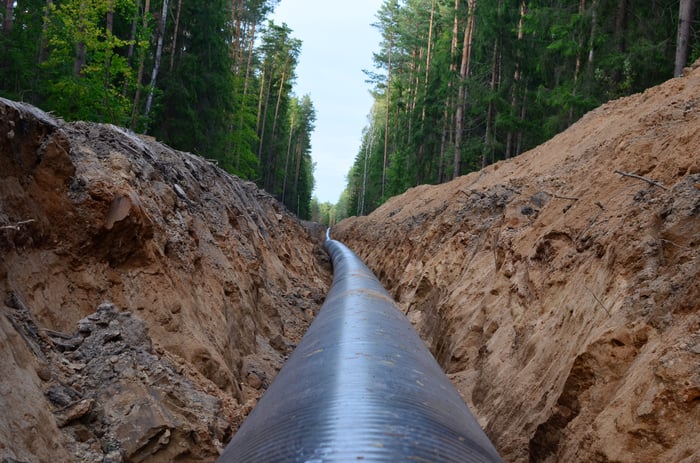 Kinder Morgan currently yields 7% and comes backed by one of its healthiest balance sheets in years. Kinder Morgan entered 2020 with its lowest total long-term debt, debt to equity ratio, and debt to capital in five years. Granted, 2020 will probably end this streak. 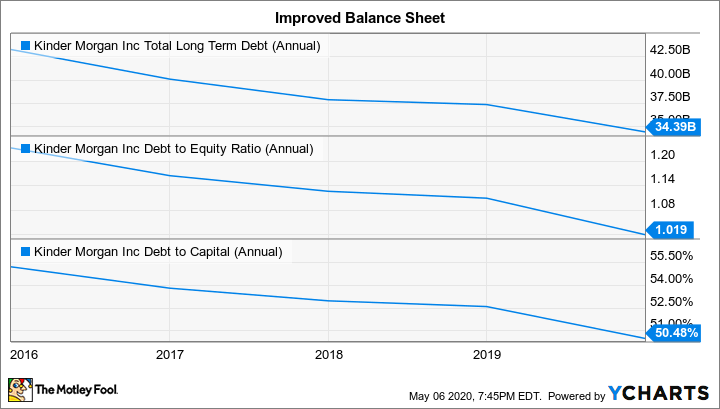 2020 is expected to be a difficult year for Kinder Morgan, but it's not too bad given the circumstances. Adjusted earnings for the first quarter were down just 5%, distributable cash flow (DCF) was down 8%, and adjusted earnings before interest, taxes, depreciation, and amortization (EBITDA) were down 5%. DCF is an important figure for a high-yielding dividend stock like Kinder Morgan because it's the amount of cash that is eligible to give to shareholders.

Unlike most energy companies, Kinder Morgan is able to counteract volatile commodity prices by generating most of its revenue from predictable fee-based or regulated customers. More than 90% of Kinder Morgan's cash flow comes from "take-or-pay and fee-based" sources. Kinder Morgan can remain largely insulated from the cyclical nature of gas prices due to its contracts. For example, natural gas volumes were actually up 8% quarter over quarter, and financial performance would have actually been better than Q1 2019 if you exclude the company's Cochin pipeline sale, part of a larger deal with Pembina Pipeline.

For the short term, Kinder Morgan's fee-based business model has protected the company from the widespread volatility currently disrupting oil and gas stocks.

For the long term, Kinder Morgan is relying on the U.S. to provide around 30% of the "increase in global natural gas production by 2030." This production growth is expected to be exported, mostly in the form of liquefied natural gas (LNG), to developing economies that will make up the bulk of natural gas consumption growth between now and 2030. For example, Kinder Morgan estimates that "Over 80% of global population lives in developing economies, where more than 90% of expected population growth to 2030 occurs."

To get there, Kinder Morgan has built and plans on adding to a network of pipelines that connect to key U.S. shale basins that are mainly centered in and around Texas. These Texas sources will funnel gas to LNG export terminals along the Gulf Coast that cool and condense the gas to 1/600th of its natural volume for transportation to developing countries.

Kinder Morgan's bet on the Gulf Coast is no accident. The company knows that domestic supply is extremely competitive as residential and industrial customers benefit from low commodity prices. However, it expects 83% of the forecasted 28 billion cubic feet per day (bcfd) in growth until 2030 to be from the Gulf Coast, 15.2 bcfd of which it thinks will come from LNG exports.

This LNG bet, paired with Kinder Morgan's high cash flow core business, makes the company an interesting long-term play. Unlike pure-play LNG stocks that are responsible for the construction of the LNG terminals themselves and the compliance headache that comes with negotiating contracts with buyers overseas, Kinder Morgan is mostly concerned with connecting the source of the gas to the coastline. However, the company does have its Elba Liquefaction terminal in Georgia, but even that is supported by long-term contracts with Shell. With an annual output of 2.5 million tonnes of LNG per year, the Elba project is expected to have all 10 units completed by summer 2020. Kinder Morgan's position as a contract-supported infrastructure player in the LNG space makes the company a safer way to play a bet on the rise of energy consumption and transition from coal to natural gas in developing countries.

However, Kinder Morgan's bold plan is not without a fair share of risks. The LNG game is a competitive playing field full of companies operating or holding shares in U.S. and Australian plays as well as the dominate state-owned Qatargas, the world's largest LNG company. A big disadvantage for U.S. LNG ventures is that Qatargas already constructed all of its existing LNG infrastructure between 1997 and 2010, positioning it as a more reliable source of LNG than U.S. projects that are largely planned and proposed. Aside from Qatargas, there are several other megaprojects in Mozambique, Russia, Indonesia, Malaysia, Nigeria, and other countries, as well as several floating LNG (FLNG) production platforms which are relevant for smaller-scale developments.

Kinder Morgan continues to operate a solid core business that provides the foundation for it to grow over the next 10 years. However, Kinder Morgan's long-term growth is dependent on the rise of U.S. LNG export volumes and the increasing use of natural gas in the energy mix of developing countries.