Please ensure Javascript is enabled for purposes of website accessibility
Log In Help Join The Motley Fool
Free Article Join Over 1 Million Premium Members And Get More In-Depth Stock Guidance and Research
By Daniel Foelber – Apr 27, 2020 at 11:22AM

Kinder Morgan (KMI 1.49%) is one of the largest U.S. midstream oil and gas companies, transporting and storing natural gas, oil, and other valuable products for customers across North America. Like many energy stocks, Kinder Morgan's future depends on where North America's energy mix is headed, the long-term relevance of oil and gas, executing projects, and maintaining a strong balance sheet.

Let's break down Kinder Morgan's Q1 earnings from last Wednesday to see how the company is doing and where it thinks it will be in one year. 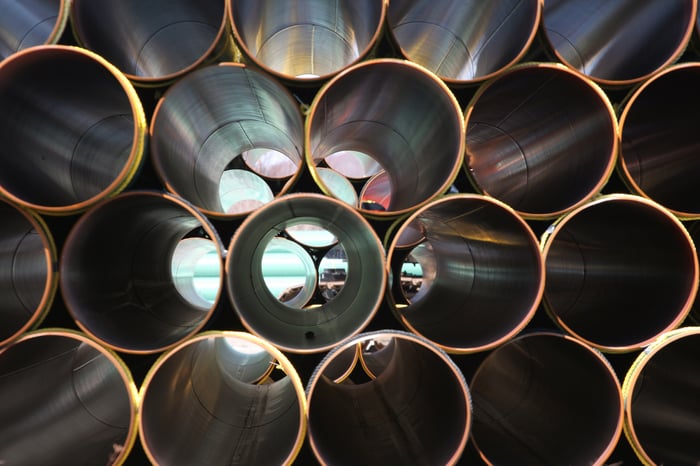 The most notable standout from Kinder Morgan's earnings was the core strength of the company's dividend, a strength Kinder Morgan has been trying to rekindle since late 2015 when it slashed its dividend by 75% during the last oil market downturn.

In January, Kinder Morgan reaffirmed its intentions to raise its annual dividend from $1.00 a share to $1.25 in 2020. Granted, this was before crude prices plummeted and the economic slowdown went into full effect.

Instead of canceling the dividend increase, or even cutting the dividend, Kinder Morgan found what it believes to be "the proper balance between maintaining balance sheet strength and returning value to our shareholders" by raising the dividend to $1.05 annually or $0.2625 a quarter.

This slight dividend raise in the midst of droves of dividend cuts across other energy stocks is an indication of strength. Kinder Morgan's focus on natural gas, the price of which has stayed relatively stable compared to oil, gives the company an edge over pipeline companies focused mostly on transporting oil.

Although earnings and distributable cash flow (DCF) were down Q1 2020 compared to Q1 2019, Kinder Morgan still generated $664 million of excess DCF above its dividend. DCF is basically the amount of cash that is eligible to give to shareholders. At $0.55 per common share, Kinder Morgan's DCF is about double its dividend of $0.2625. Having excess DCF is important because it shows that Kinder Morgan can truly afford its dividend distributions without severely damaging the company's financial strength.

Adjusted earnings for the quarter were down just 5%, DCF was down 8%, and adjusted earnings before interest, taxes, depreciation, and amortization (EBITDA) was down 5%. Of that 5%, natural gas pipelines, the company's largest profit generator by far, was only down 2%, whereas products pipelines was down 7%, terminals was down 14%, and CO2 was down 7%.

Not too bad either, especially considering the company believes it has enough cash on hand and expects to generate enough cash to handle its debt maturities over the next 12 months. In an effort to not strain the balance sheet, the company is also cutting its "expansion capital outlook for 2020 by approximately $700 million, or almost 30 percent."

This reduced spending shouldn't be too much of an issue for Kinder Morgan's long-term growth, considering it has already completed major infrastructure projects in its main growth area, the Gulf Coast.

The company's recent projects in its natural gas pipelines segment seem to be paying off, particularly new revenue from Elba Liquefaction and the Gulf Coast Express projects. For its Elba project, Kinder Morgan just installed unit six of ten on April 20 and plans to finish all units by summer 2020. The project's 2.5 million tonnes of LNG per year is supported by long-term contracts with Shell.

The Elba project is a classic example of Kinder Morgan's conservative business strategy paying off big time in the current economic slowdown.

To counteract volatile commodity prices, Kinder Morgan generates most of its revenue from predictable fee-based or regulated customers. More than 90% of Kinder Morgan's cash flow comes from "take-or-pay and fee-based" sources. Energy stocks are cyclical, so short-term oversupply paired with what is realistically a 20% or more global decrease in demand can cripple oil prices, as we saw by negative May crude futures on April 20. Kinder Morgan can remain insulated from this volatility in the short-term due to its contracts. For example, natural gas volumes were actually up 8% quarter-over-quarter, and financial performance would have actually been better than Q1 2019 if you exclude the company's Cochin sale, part of a larger deal with Pembina Pipeline.

Given the circumstances, Kinder Morgan's first-quarter earnings and full-year guidance are impressive. The ability to raise a dividend in a safe and secure way proves that Kinder Morgan's natural gas focus and business model of long-term contracts give it a favorable position compared to other oil and gas companies. The company's 7% yield is one of the few examples of a reasonably safe and sizable dividend from an energy stock.