Please ensure Javascript is enabled for purposes of website accessibility
Log In Help Join The Motley Fool
Free Article Join Over 1 Million Premium Members And Get More In-Depth Stock Guidance and Research
By Donna Fuscaldo - May 11, 2020 at 11:59AM

The Trump administration wants to lessen its reliance on chips coming out of Asia and is turning to Intel and TSMC for help.

Intel (INTC -0.03%) and Taiwan Semiconductor Manufacturing (TSM -2.04%) are holding discussions with the White House about building chip plants in the U.S.

The discussions come in response to increased tensions between the U.S. and China amid the COVID-19 pandemic. With the U.S. heavily dependent on Asia, especially Taiwan, for its supply of semiconductors and related components, the Trump Administration is seeking ways to lessen that dependency. 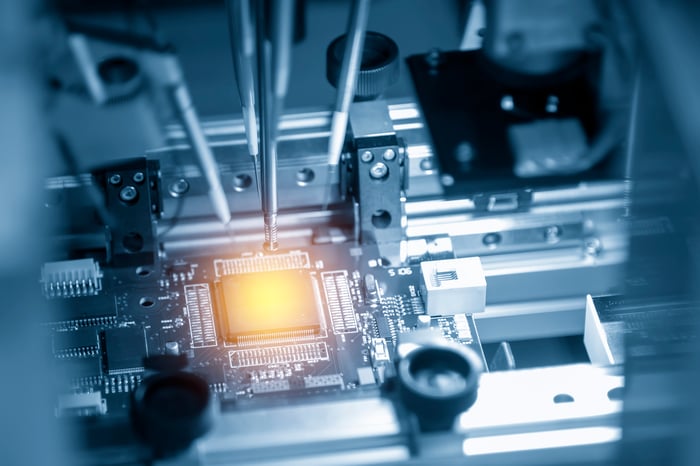 William Moss, an Intel spokesman told Reuters that America's largest chipmaker has held talks with the U.S. Department of Defense about ways to improve the number of chips and semiconductor technology produced within the U.S. Recently, Intel has been pushing for the company to build a U.S.-based foundry, with CEO Bob Swan sending a letter to the Department of Defense at the end of April.

"We currently think it is in the best interest of the United States and of Intel to explore how Intel could operate a commercial U.S. foundry to supply a broad range of microelectronics," Swan wrote in the letter obtained by The Wall Street Journal." As the largest US-owned manufacturer of semiconductors, Intel spends more than $13B each year on research and development to continue a trajectory of innovation that will provide the foundation for solutions to address our national challenges ahead."  The idea is for the tech stock to open a plant that churns out advanced chips that are secure enough for the U.S. government, but could also be used by other customers.

Meanwhile, The Wall Street Journal reports that Taiwan Semiconductor is in discussions with the U.S. Department of Commerce and U.S. Defense Department about potentially erecting a semiconductor plant on U.S. soil. The chip company told the WSJ it's currently looking at locations for a plant, including in the U.S., but nothing has been finalized yet. Apple (AAPL -0.29%) is also in discussions with the Commerce and Defense departments, notes the paper.