Please ensure Javascript is enabled for purposes of website accessibility
Log In Help Join The Motley Fool
Free Article Join Over 1 Million Premium Members And Get More In-Depth Stock Guidance and Research
By Jeremy Bowman – May 11, 2020 at 5:24PM

Shares of the investment bank jumped in April as the broad market bounced back.

Shares of Goldman Sachs (GS -3.50%) jumped last month as the investment bank got a boost from the broader rebound in the market, which was propelled by signs that the pandemic was peaking in the U.S. and news that the Federal Reserve was taking aggressive action to support the economy. The banking stock finished April 19% higher, according to data from S&P Global Market Intelligence.

As you can see from the chart below, the bulk of the gains came in the second week of April as investors reacted to positive coronavirus data and as the Federal Reserve announced another economic support program. 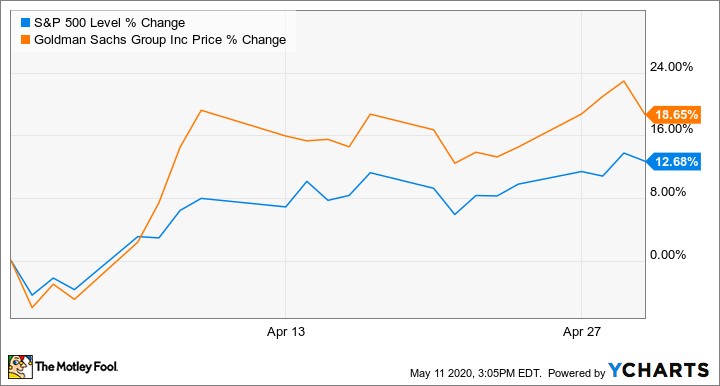 After sliding for the first few days of the month, Goldman shares jumped 8% on April 6 as investors responded favorably to reports that the coronavirus pandemic had peaked in some of the hardest-hit European countries such as Italy and Spain, and signs that the virus was plateauing in New York, the epicenter of the U.S. outbreak. Stocks rallied broadly that day with the S&P 500 finishing 7% higher. 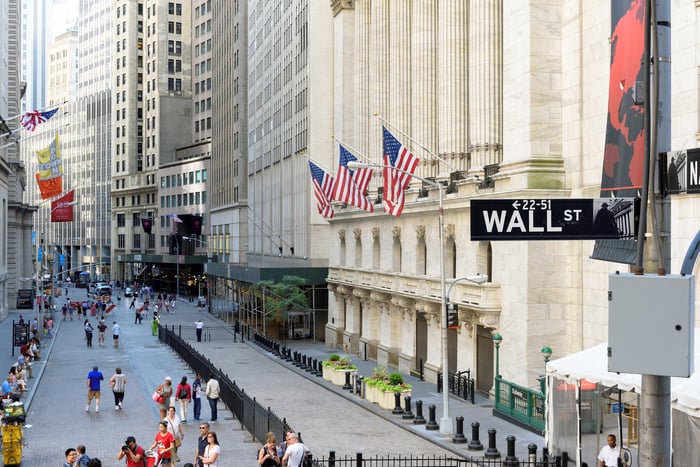 Goldman stock continued to rally through the week as the company doubled its participation in the Small Business Administration loan program to $500 million and as The Wall Street Journal reported that the bank may be able to recoup $115 million in loans it made to the now-bankrupt children's apparel retailer Gymboree.

On April 9, the stock climbed another 5% after the Federal Reserve said it would deploy up to $2.3 trillion to bolster the economy, further reassuring investors, especially shareholders in financial sector companies, as banks like Goldman are highly sensitive to potential defaults and systemic risk.  The same day, Fed Chairman Jerome Powell also said he did not think it was necessary for big banks to suspend their dividends, driving share prices in the sector up further.

Finally, Goldman shares traded largely flat for the rest of the month after it reported its first-quarter results on April 15. Revenue was down 1% to $8.74 billion,  which beat estimates of $8.47 billion. On the bottom line, it finished with earnings per share of $3.11, below the consensus at $3.75 and down from $5.71 in Q1 2019, as the company took a $937 million charge for loan loss provisions in the quarter, mainly due to the COVID-19 pandemic and the challenges in the energy sector.

Goldman shares gained a bit near the end of April along with the market as a number of states took steps to begin reopening their economies, though the stock has been flat so far in May. The investment bank could continue to see credit-related troubles if the economy is slow to recover, and it will be impacted by other cyclical forces. Keep your eye on loan-loss reserves at Goldman and other banks for clues about the risks facing the banking sector.