Please ensure Javascript is enabled for purposes of website accessibility
Log In Help Join The Motley Fool
Free Article Join Over 1 Million Premium Members And Get More In-Depth Stock Guidance and Research
By Eric Volkman - May 12, 2020 at 11:55AM

The cannabis company managed to narrow its net loss on a quarter-over-quarter basis, but that loss was still considerable.

Shares of Tilray (TLRY) were trading down in after-hours action on Monday, following the release of the Canadian marijuana company's first-quarter results after market close. 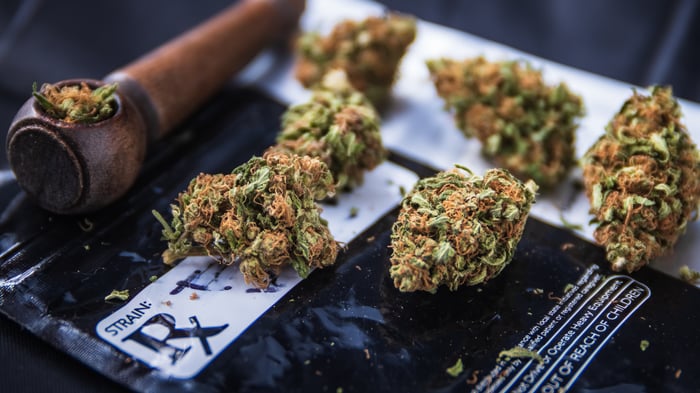 Revenue was higher than analysts' average estimate of just over $50.6 million. However, those forecasters collectively predicted a net loss of only $0.42 for the period.

Tilray achieved year-over-year sales growth in all of its product categories, in some cases at dramatic rates. Revenue from its core recreational marijuana business rose by 165% to slightly more than $20.9 million. More robust growth came from hemp sales; these climbed almost 300% to $21.3 million (although this was due to a fuller consolidation of its hemp business, Manitoba International, during the quarter).

Revenue in its international medical marijuana segment leaped 221% to $5.8 million, and Tilray is bullish about the future of that market. "As evidenced by our International Medical sales in the quarter, we expect this segment to demonstrate continued growth and positively impact margins," the company wrote in its earnings release.

But investors appeared dismayed by the latest in a string of quarterly losses for the company. Tilray shares were down by almost 6% after hours in the wake of its earnings release late Monday. As of 11:40 a.m. EDT Tuesday, they had recovered somewhat, but remained down by about 3%.