Please ensure Javascript is enabled for purposes of website accessibility
Log In Help Join The Motley Fool
Free Article Join Over 1 Million Premium Members And Get More In-Depth Stock Guidance and Research
By Reuben Gregg Brewer - May 12, 2020 at 11:23AM

The food delivery company could be in play and investors are clearly excited by the idea.

Shares of food delivery company Grubhub (GRUB) rose as much as 36% on May 12. The jump happened about an hour or so into the trading day before pulling back. By 11:30 a.m. EDT, the stock was still up roughly 25%.

The big jump was precipitated by a news item from Bloomberg that claimed Uber Technologies (UBER 4.30%) had approached Grubhub with an acquisition offer. Citing "people familiar with the matter," Bloomberg said the two sides could reach a deal this month, but gave no specifics of the proposed transaction. Uber's stock was up by around 5% by 11:30 a.m. 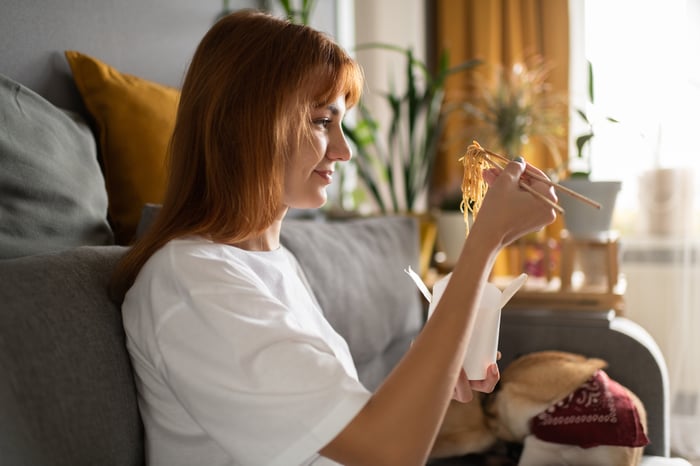 Uber, with a $58 billion market cap, is a much larger company than roughly $5 billion market cap Grubhub. And Uber has a much more diverse business, though it's largely known for connecting drivers with customers. That said, Uber and Grubhub compete directly in the food delivery space, which has gained increasing prominence during the economic shutdowns related to COVID-19. Yet with no takeover price reported, investor excitement here is built mostly on hype right now.

At this point, the news is out and investors have probably missed the big gain in Grubhub's stock. That said, it's usually a bad idea for long-term investors to buy a stock just because of acquisition rumors, anyway. Rumors don't always turn into action. If you own either company, you'll obviously want to keep an eye on the story here. If you don't own either company, this rumor alone shouldn't be enough to get you involved.