Please ensure Javascript is enabled for purposes of website accessibility
Log In Help Join The Motley Fool
Free Article Join Over 1 Million Premium Members And Get More In-Depth Stock Guidance and Research
By Rhian Hunt – May 13, 2020 at 12:05PM

Online retail titan Amazon.com (AMZN -0.54%) revealed a new, upgraded version of its Fire HD 8 tablet today, complete with a base price of around $90 and a lineup of improved features. The new tablets, which arrive just in time for people spending more time at home due to coronavirus-related stay-at-home policies, and in sync with Amazon's aggressive push into video streaming, come in three different configurations.

A processor speed boost of 30%, 12 hours of battery life, and expanded storage are the key features Amazon's new tablet offers to make it competitive against other companies' offerings. The $89.99 base model Fire HD 8 includes 32 GB storage plus the lineup's improved battery life and speed. The $109.99 Fire HD 8 Plus is 64 GB, comes with a six-month Kindle Unlimited subscription, and can be charged wirelessly in 4 hours using an upright charging dock. 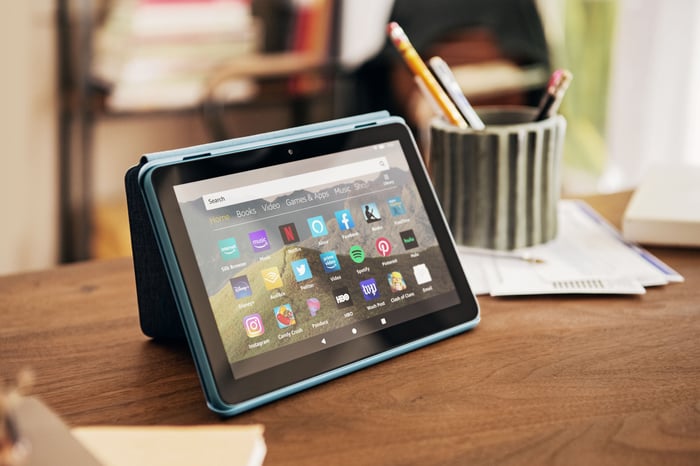 The final tablet in the trio is the $139.99 Fire HD 8 Kids Edition, which includes a two-year guarantee and a one-year subscription to the "kid-friendly" Amazon FreeTime Unlimited. This variant sports a heavy-duty, reinforced case to help it survive rough handling by youngsters.

Since its introduction in 2011 under the name of Kindle Fire, Amazon's Fire tablet line has faced stiff competition from Apple, Samsung, and other major rivals. According to IDC research, Amazon Fire sales plunged 29% in 2019, putting it in fourth place behind Apple, Samsung, and Huawei. By unit shipments and market share, however, it was actually slightly ahead of its 2018 tablet market position.