Please ensure Javascript is enabled for purposes of website accessibility
Log In Help Join The Motley Fool
Free Article Join Over 1 Million Premium Members And Get More In-Depth Stock Guidance and Research
By Donna Fuscaldo – May 13, 2020 at 3:41PM

Apple employees who can't do their jobs from home began returning to the office in certain regions around the globe.

Apple (AAPL -1.51%) has started allowing some employees to begin returning to work as part of a phased plan that will play out over several months, Bloomberg reports.

Citing people familiar with the plan, Bloomberg reports that the iPhone maker started letting employees who can't work from home, or are having a tough time doing so, return to the office in certain regions around the globe. The plan is to expand that to more offices during May, with even more employees returning in June and July. 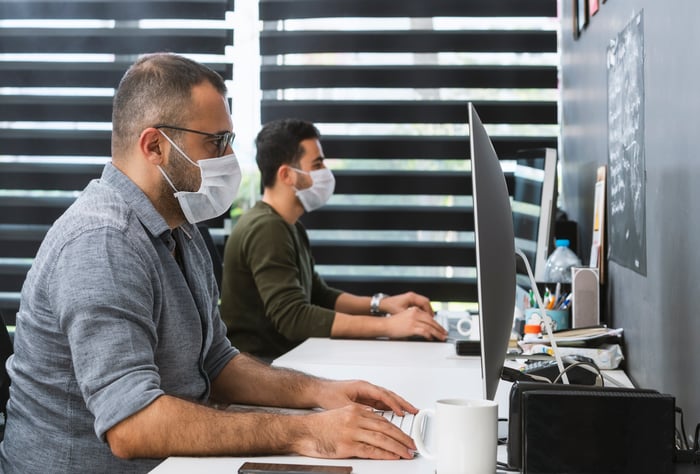 Apple's move flies in the face of how other technology companies are approaching a return to work. This week, Twitter (TWTR 0.43%) announced that some employees would be permitted work at home indefinitely. Meanwhile, Facebook (META -1.69%) has said it will let employees work from home through the rest of 2020, and Alphabet's (GOOG -1.39%) (GOOGL -1.40%) Google said while it will begin opening offices around the world in June, although the vast majority of employees will remain working from home potentially until 2021. While Apple is expanding its services offerings it still remains primarily a hardware company and thus needs certain employees to return to its offices.

Apple's plans could change and will be dictated by state stay at home orders, Bloomberg notes. In addition to readying employees to return to its physical offices, Apple is gearing up to open shuttered retail locations throughout the world. Apple announced earlier this month that it would begin opening Apple Stores in the U.S. this week. With the exception of China, Apple closed its retail stores since the middle of March in response to the pandemic.