Please ensure Javascript is enabled for purposes of website accessibility
Log In Help Join The Motley Fool
Free Article Join Over 1 Million Premium Members And Get More In-Depth Stock Guidance and Research
By Anders Bylund – May 13, 2020 at 7:21AM

The chipmaker is priced for total perfection, and that's a lot to ask even if the company is running under high-quality leadership.

Semiconductor designer Advanced Micro Devices (AMD -6.51%) is a big winner these days. The stock has been crushing the broader market as well as archrivals Intel (INTC -2.76%) and Nvidia (NVDA -4.98%) over the last two years: 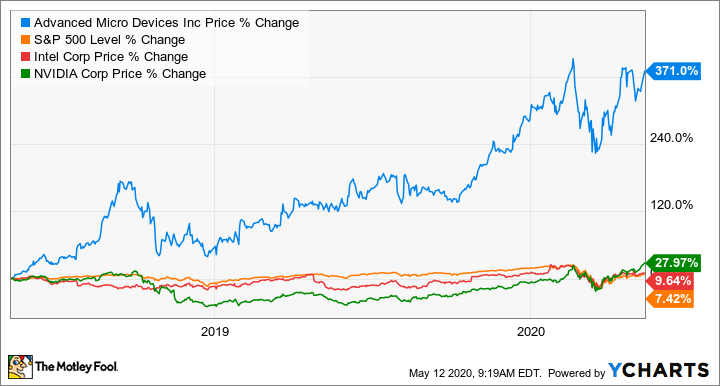 Is AMD's stock still a buy after these dramatic gains? Let's have a look.

This is not a cheap stock. AMD's share prices are holding up fairly well in the COVID-19 health crisis, falling just 6.5% since the onset of global coronavirus worries in February. Over the same period, Intel's stock fell 11.5%, and the S&P 500 market barometer dropped 14%.

Even a dramatic plunge wouldn't have made an obvious value stock out of AMD. The stock is trading at nosebleed valuation ratios: around 130 times trailing earnings and 150 times free cash flows. Buying AMD shares today amounts to a vote of confidence in CEO Lisa Su, who has made a habit out of delivering on AMD's promises. The company hasn't missed Wall Street's earnings targets since the fall of 2015, and the company's financial results tend to land exactly where analysts expected -- based on AMD's official guidance targets.

Analysts and investors see a long-term success story developing under Su's steady hand. Without that trust, AMD's stock wouldn't be valued like a high-octane growth stock.

COVID-19 lockdown orders boosted the PC market in the last couple of months as office workers and students prepared to get their work done from home. Laptop sales are particularly strong right now.

That upside will shift into a downside for the next couple of quarters as the initial rush to pick up home office fixtures fades. Rising unemployment figures and uncertainty in the business world will weigh on AMD's sales instead. The most significant upside to the rest of 2020 should come in the second half of the year, as both Microsoft (MSFT -2.33%) and Sony (SONY -3.09%) ramp up component orders for their next-generation gaming consoles. AMD won the design bids for central processors and graphics systems in both of these surefire hit products.

Under these circumstances, AMD expects second-quarter sales to land near $1.85 billion, a 21% increase over the same period in 2019. For the full fiscal year, the company expects 25% year-over-year revenue growth and a final top-line tally of approximately $8.4 billion. Three months ago, when the coronavirus felt like a distant threat on Chinese shores, the full-year sales target stood at $8.7 billion.

The upshot: Hold your horses

AMD's upswing in recent years is very convincing, and the stock may indeed have legs, but the chipmaker's shares are also priced for absolute perfection. I wouldn't bet against Lisa Su by selling AMD's stock short, but it wouldn't take much of a slip to send those skyrocketing stock prices back to earth in a hurry.

In short, AMD's stock is best watched from the sidelines until its valuation starts to make sense.