Near-term demand is uncertain, but sales are expected to soar in 2020.

Advanced Micro Devices (AMD -0.60%) met analyst expectations with its first-quarter report on Tuesday evening, with revenue of $1.79 billion and adjusted earnings per share of $0.18. Revenue was up 40% year over year, although it slumped 16% from the previous quarter.

Unlike many companies, AMD provided guidance for both the second quarter and the full year. AMD expects second-quarter revenue to rise 21% year over year, driven by PC and server chip sales. For the full year, the company sees revenue up between 20% and 30%. However, AMD also said that it expects some uncertainty in the near-term demand environment due to the novel coronavirus pandemic. 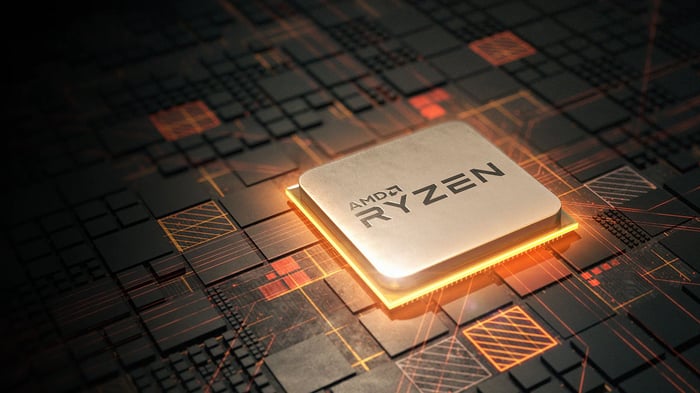 AMD's growth in the first quarter was driven by its computing and graphics segment, which includes PC processors and graphics chips. Sales were up 73% year over year. The company has been winning market share from chip giant Intel in the PC market with its Ryzen processors, which have mostly caught up to its rival in terms of performance. AMD launched the third-generation Ryzen desktop CPUs last summer, and laptops powered by its Ryzen 4000 Mobile chips are being rolled out this year.

On the graphics side, AMD launched products last year that were very competitive with products from market leader NVIDIA. AMD still has no real presence in the high end of the market, but it plans to eventually launch more powerful graphics chips that could give NVIDIA a run for its money.

Demand for PCs, particularly laptops, has surged as working from home has become a reality for many employees amid the pandemic. But the U.S. is likely in a recession, and there's no telling how long it will last or how bad it will be. PC demand could tumble later this year due to the economic environment, which would offset any market share gains on AMD's part.

AMD's EPYC server chips have been slower to gain market share, but the company's products are now competitive enough with Intel to prompt its larger rival to slash prices. The segment that contains server chips saw sales slump 21% in the first quarter, but the decline was due to tumbling sales of semicustom chips that power the major game consoles. AMD expects EPYC to be a key growth driver in this year.

A semicustom boost later this year

AMD's chips will power both the PlayStation 5 and Xbox Series X game consoles, set to launch ahead of the 2020 holiday season. The company should see a significant increase in semicustom sales in the third quarter as the console manufacturers build supply for the holidays. "We expect semi-custom revenue to increase in the second quarter and be heavily weighted toward the second half of the year as we ramp production to support the holiday launches of the new PlayStation 5 and Xbox Series X consoles," said CEO Lisa Su during the earnings call.

It's possible that this year's console launches will fall short of expectations. Sony is reportedly planning for fewer sales of the PlayStation 5 than its predecessor in the first quarter after launch, partly due to a high price crimping demand. If the U.S. economy is still in rough shape later this year, consumer appetite for expensive game consoles might be limited.

Expectations were high for AMD going into the first-quarter report. The stock has surged from its March low, and it now sits just slightly below its 52-week high. Shares trade for around 50 times the average analyst estimate for adjusted earnings this year, a valuation that bakes in substantial market share gains.

Potential headwinds this year include a slump in PC demand due to the economy and weaker-than-expected sales of the new game consoles. Another wrinkle: The vast cloud computing industry was in its infancy during the last recession, so it's unclear how it will fare over the next couple of quarters, especially as cloud computing customers run into financial trouble. Demand for AMD's EPYC chips could take a hit if the cloud giants pull back on spending.

While there's a lot that could go wrong, AMD should continue to gain market share across all its products this year. Whether that's enough for the company to hit its full-year target remains to be seen.