Please ensure Javascript is enabled for purposes of website accessibility
Log In Help Join The Motley Fool
Free Article Join Over 1 Million Premium Members And Get More In-Depth Stock Guidance and Research
By James Brumley – May 13, 2020 at 8:32AM

If the company's direct-to-consumer experiment works, it could mark a major turning point for the grocery industry.

A handful of consumer goods names have been touching on the idea for years. Blue Apron, for instance, capitalized on the idea that people don't have the time or desire to piece together the ingredients needed to make nice meals at home. Kroger has been crushing it with curbside pickup, while Amazon has carved out a piece of the dry goods market. Beverage and snack giant PepsiCo (PEP -1.83%), however, quietly unveiled a couple of its own direct-to-consumer (DTC) platforms on Monday, making it the first major brand to pull the trigger.

The move should concern all the retailing middlemen that had grown complacent, presuming they were an integral, permanent part of the distribution chain. They're not. One can only wonder how long it will take players like Coca-Cola or Procter & Gamble to make comparably bold steps.

PepsiCo adapts to the new norm

In these uncertain times, as more and more consumers are using e-commerce channels to purchase food and beverage products, PantryShop.com and Snacks.com offer shoppers another alternative for easy and fast access to products they love. 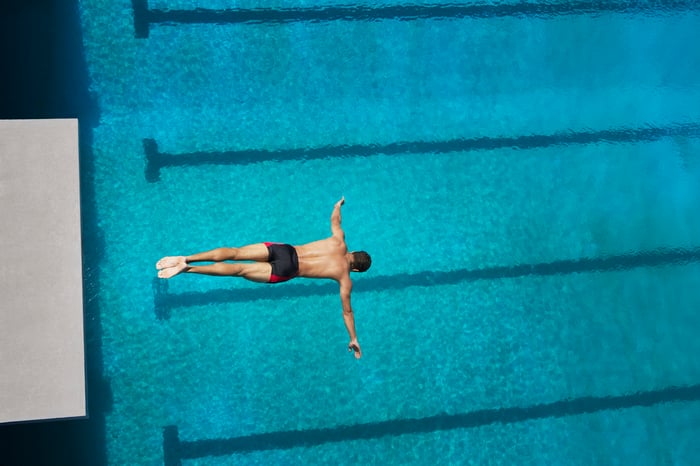 Those are the two new direct-to-consumer websites PepsiCo built from the ground up in less than 30 days, in response to the coronavirus contagion that's kept millions of people essentially trapped at home.

Snacks.com features chips and snacks made by PepsiCo's Frito-Lay unit, which includes familiar names like Lay's potato chips and Doritos. PantryShop.com offers goods one would expect to find, unsurprisingly, in a pantry, like Quaker brand oatmeal and Aunt Jemima pancake mix. Rather than selling by the box or product, PepsiCo has bundled several different products into one package that intuitively makes sense. Its Rise and Shine package, for instance, includes pancake mix, breakfast bars, bottled juices, cereal, and a few other items a family may choose for breakfast.

Consumers can easily click and pay for their purchase online. Their order arrives two-to-four days later, much like any other online purchase.

The tailwind is strengthening

The potential of this new venture isn't exactly clear, but it's apt to be more than a pittance. E-commerce research outfit Brick Meets Click estimated that only 6.3% of last year's total spending on groceries in the United States was initiated online. But also last year, 13% of U.S. households reported the use of a grocery delivery or curbside pickup service within the previous 30 days. Both numbers had been steadily growing too, indicating expanding acceptance of the idea.

Such demand exploded in March of this year when consumers were stuck at home as part of self-imposed lockdowns intended to curb the spread of COVID-19. Bricks Meet Click said in late March that for the month in question, the number of U.S. consumers who were ordering online more than doubled to 39.5 million, and they were buying a lot more -- and buying a little more often -- than they had in the past. The sheer number of online orders nearly tripled between August of last year and March of this year, swelling from 16.1 million to 46.9 million.

As more shoppers learn about it and how to do it, online orders and delivery are expected to become a much bigger piece of the total grocery market. COVID-19 surely accelerated that movement.

The company is capitalizing on that shift regardless of how quickly it's taking shape. Its online orders are currently shipped for free, which isn't a bad trade-off for a two-to-four-day wait. It seemingly could prove costly, but remember, PepsiCo is a wholesaler to grocery stores, giving those middlemen significant price breaks. Consumers pay a marked-up retail price. Snacks.com and PantryShop.com make PepsiCo the retailer though, where retail-like prices prevail. Free shipping may well pay for itself.

It's a smart move, although not one that's likely to significantly move PepsiCo's revenue or profit needle for a long while. Chief among the impasses is the simple fact that for all the hype online groceries has created, it's still only a tiny fraction of the grocery industry's business. It's growing fast, but its fast growth is coming off a relatively small base.

It's a step in the right direction all the same though and the sooner, the better. As consumers' habits change, PepsiCo will be there to help steer those changes. As buying habits change, the beverage giant has a chance to widen margins by playing the role of retailer of its own wholesale goods.

As for grocers like Kroger and even Amazon, it's not yet a reason for them to sweat either. It is something they need to watch carefully, though, if only because other consumer-goods brands, such as P&G and Coca-Cola, could embrace the same idea to the same degree.