Please ensure Javascript is enabled for purposes of website accessibility
Log In Help Join The Motley Fool
Free Article Join Over 1 Million Premium Members And Get More In-Depth Stock Guidance and Research
By Daniel Miller - Updated May 13, 2020 at 3:50PM

Comments from the Fed chairman certainly didn't remove the doom and gloom surrounding the restaurant industry.

Powell's comments Wednesday made a V-shaped recovery seem more unlikely, which is obviously grim news for the badly hurt restaurant industry, where many will struggle financially with a long-term slash in revenue potential. "The recovery may take some time to gather momentum, and the passage of time can turn liquidity problems into solvency problems," Powell said during his webcast appearance with the Peterson Institute for International Economics.

He also noted that a longer downturn could "leave behind lasting damage" to the economy. The gloomy comments sent broader markets lower.

Looking specifically at these three restaurant stocks, investors will need to watch how management is offsetting the slowdown. Darden Restaurants said that fourth-quarter same-store sales through April 19 declined 44.7%, but that based on the past two weeks, its ongoing weekly cash burn improved to roughly $20 million. The company has been able to offset some of its lost dine-in crowd by pushing its to-go options.

In fact, its Olive Garden to-go sales tripled from the week ended March 1, to the week ended April 19. Over the same time period, to-go sales more than quadrupled at its LongHorn Steakhouse chain. Management also offered 7.8 million shares of common stock for $58.50 per share, and will use the net proceeds as needed to help weather the COVID-19 storm. 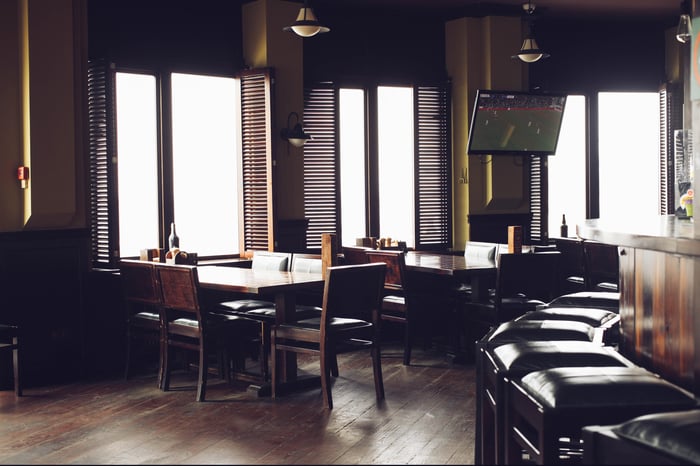 Brinker International, owner of Chili's and Maggiano's Little Italy, faced a similar situation as the company moved to an off-premise-only business model. Its off-premise sales have grown each week since COVID-19 began hurting the restaurant business, generating 57% of the prior year's total restaurant sales for the week ended April 22.

Brinker also bolstered its liquidity by pricing a public offering of 7 million shares of common stock at $18.25 per share, and expects the roughly $121 million in net proceeds to help keep operations afloat until COVID-19 is under control. Management estimates its cash burn to be roughly $5 million per week. 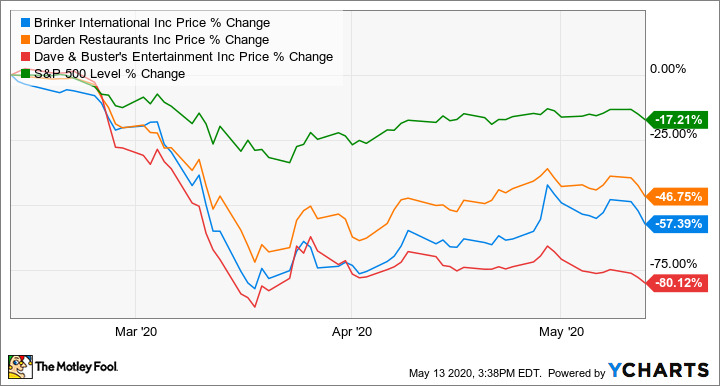 Dave and Buster's has been the hardest hit of these three restaurant stocks as the company hasn't been able to offset the loss of not only its dine-in crowd, but also its gaming revenue. The company shut down all locations and immediately halted almost all new-store construction and capital spending on strategic initiatives, remodels, games, and maintenance. It also suspended its quarterly dividend and share repurchase program and bolstered its liquidity by roughly $100 million through a stock sale to Jefferies.

Restaurant companies are doing all they can to bolster liquidity, cut costs, and offset the dine-in sales decline with innovative to-go and off-premise options. But COVID-19 will continue to put serious financial pressure on restaurants even as parts of the economy restart. Powell's comments today made a quick recovery seem more unlikely, meaning some restaurant stocks may not have the liquidity to weather the full economic impact.

While there are undervalued stocks out there, investors must do their due diligence to understand if the companies have a strong balance sheet, an ability to offset some of their dine-in crowd losses, and liquidity to keep operations afloat for a long stretch. Broader markets will almost certainly bounce back over time, but not all companies will. Invest wisely.