Please ensure Javascript is enabled for purposes of website accessibility
Log In Help Join The Motley Fool
Free Article Join Over 1 Million Premium Members And Get More In-Depth Stock Guidance and Research
By Will Ebiefung – May 14, 2020 at 11:08AM

Tech stocks aren't typically known for their dividends, but these three companies buck the trend with generous payouts.

If you want to beat the market, you should seriously consider dividend investing. According to research from Hartford Funds, 78% of the S&P 500's total return from 1970 to 2019 can be attributed to reinvested dividends and the magic of compounding.

While the growth-oriented tech sector might not be a familiar place for some dividend investors, many technology stocks break the mold by offering market-beating yields.

Here is a list of three such high-yield tech companies. The first pick, Texas Instruments (TXN 2.27%), is a bet on the lucrative computer hardware industry, while the other two, IBM (IBM 0.62%) and Cisco Systems (CSCO 0.96%), are investments in the fast-growing IT sector. All three stocks pay dividends above 3% and have increased their payouts for over eight years running. 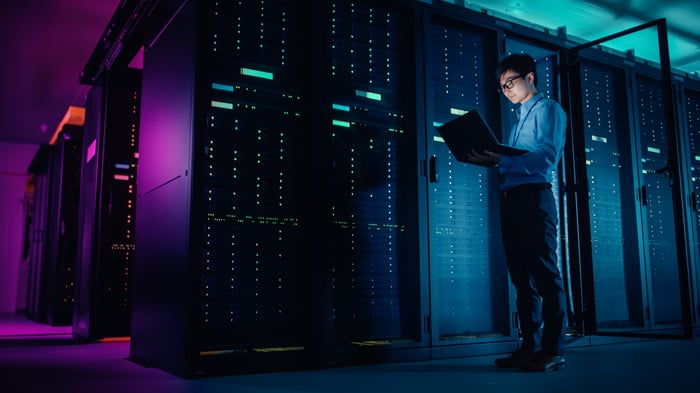 For many, the name Texas Instruments brings back bad memories of those giant graphing calculators from school. But the company is primarily a manufacturer of semiconductors and other B2B (business-to-business) hardware products. This is a lucrative but competitive industry with high entry costs for new competitors, giving Texas Instruments a solid moat that can sustain its revenue for years to come.

While Texas Instruments' memory and computing business will benefit from long-term megatrends toward automation in the industrial and automotive sectors, the business is mature, and investors shouldn't expect its top line to grow very quickly. Revenue has grown at a compound annual rate of just 2.6% since 2015. But despite its mature top line (which hit $14.4 billion last year), Texas Instruments returns billions to shareholders through robust capital return policies such as its dividend and share repurchases.

Texas Instruments stock sports a 3.3% yield as of this writing, and it has increased its payout for an impressive 15 years running. The dividend cost the company $3.0 billion in 2019 compared to a net income of $5.0 billion, giving it a payout ratio of 60%. The dividend is supported by a massive share repurchase program that saw the company buy back $3.0 billion of shares in 2019 and $5.1 billion in 2018.

Fondly known for its question-answering machine, Watson, IBM is one of America's oldest technology blue-chips. The company has moved away from the hardware and mainframe business that defined it last century into cutting-edge fields like cloud computing and big data solutions.

While IBM revenue has been stagnant for the last decade with a 5.6% decline since 2015 -- the company's revenue mix has changed dramatically. In 2013, cloud represented only 4% of the top line; now that number is 27%. The cloud and cognitive division continues to grow faster than the rest of the company, rising 4.5% to $23.2 billion in 2019 while every other segment declined (except global business services which only grew 0.2%). The cloud division also boasts higher margins than the rest of the company, with a 76.7% gross margin compared to 27.7% in global business services and 34.8% in global technology services.

IBM stock currently yields 5.4%, making it the most generous dividend payer on this list. However, its payout ratio was a solid 61% last year, and like Texas Instruments, the company has been reducing its share count after buying back over $6 billion of stock in the past two years. IBM recently earned Dividend Aristocrat status with a 25-year record of annual dividend increases. And management is confident in their ability invest in future growth drivers while returning value to shareholders through the dividend and buybacks.

Cisco is another stock that should be on every dividend investor's radar. The company operates a mature business designing and selling internet-based goods and services. And while annual revenue growth has averaged just 2% over the last five years, Cisco has several major growth drivers that should boost its top line long term. The company's IP-based network solutions are well-positioned to benefit from the Internet of Things (IoT) -- a growing trend that will see billions of electronic devices ranging from refrigerators to industrial equipment brought online. The ongoing rollout of 5G networks will also provide Cisco with new revenue opportunities that can sustain its dividend growth for years to come.

Cisco Systems yields 3.4% as of this writing, and it has increased the payout for eight years running. The company paid $6.0 billion in total dividends in fiscal 2019 compared to net income of $11.6 billion, giving it a payout ratio of 51%.

Like other mature tech companies, management boosted capital returns after repurchasing $21.6 billion of shares in fiscal 2019 and $18.3 billion in 2018. Over the last 10 years, the company has reduced its outstanding share count over 24%. But while buybacks are a great way to boost earnings per share and ensure dividend sustainability, Cisco may be better served deploying some of this capital toward investments, acquisitions, or research and development to drive future top-line growth.

The growth-oriented tech space might not be the typical sector for income-hungry investors, but these three stocks are all good buys for those who value stable, blue-chip companies that prioritize returns to their shareholders.