Please ensure Javascript is enabled for purposes of website accessibility
Log In Help Join The Motley Fool
Free Article Join Over 1 Million Premium Members And Get More In-Depth Stock Guidance and Research
By Rick Munarriz - May 15, 2020 at 11:30AM

The leading online retailer vs. one of the last consumer electronics superstores left standing may not seem like a fair fight, but never underestimate the underdog.

It's hard to deny the mastery of Amazon.com (AMZN -0.99%). The e-tailing bellwether is just one of three U.S. companies commanding a market cap north of $1 trillion, and it has clearly become a bigger part of our lives in this global pandemic.

Pitting Amazon against Best Buy (BBY 2.83%) may seem cruel at first. The consumer electronics superstore chain is an icon of brick-and-mortar retailing. Best Buy has tried to cash in on e-commerce, but won't the high costs of running and staffing an empire of local stores be an expense-saddled albatross around its neck? Isn't Best Buy simply the Circuit City that lived?

The winner may seem obvious at first, but let's take a closer look at two retailing players that have not only survived, but thrived along the way. Let's pit Amazon against Best Buy to see which one is the better stock to buy right now. 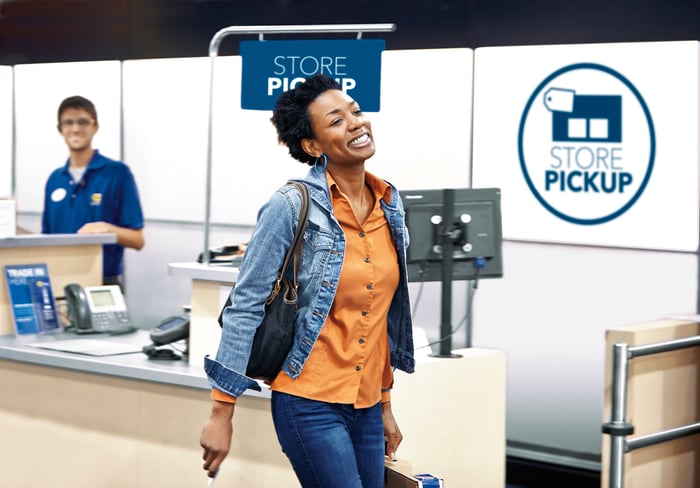 Amazon has clearly been the better investment in the past, generating game-changing wealth for investors. However, don't underestimate the kind of gains Best Buy has delivered through both capital appreciation and income. Dividends probably didn't initially factor into your decision process because Amazon has never shelled out a cash distribution to its shareholders. It's a different story at Best Buy, which is currently yielding 2.9%. Best Buy has also boosted its payouts in each of the past eight years.

Best Buy obviously isn't a consideration just because it's the one that pays a steady and (for now) growing dividend. Amazon has been the bigger winner through most stretches of time, but sometimes it can be fairly close.

Let's draw the starting line at the tail end of 2012. Best Buy had initially thrived after the 2008 liquidation of Circuit City, but it was in bad shape just a few years later. Revenue and profitability were going the wrong way, and the chain brought in Hubert Joly to turn things around. His Renew Blue strategy aimed at breathing new life into customer satisfaction while also boosting market share, revenue growth, and margins. It worked, for the most part, and since the start of 2013, the stock has delivered a dividend-adjusted gain of 699% through Thursday's close.

Amazon has fared even better, with its stock soaring 852% in that time. Amazon's global breadth has only continued to grow. There are now more than 150 million Amazon Prime members paying for access to expedited shipping, exclusive discounts, and a growing treasure trove of digital services. However, Amazon hasn't been afraid of joining Best Buy in the brick-and-mortar world. Its $13.7 billion acquisition of Whole Foods Market, opening namesake stores, and expanding its localized distribution centers to provide even speedier deliveries make it more than just an online retailer these days.

Best Buy has also gotten better about cyberspace. More than a quarter of its sales are now being generated online, and it's not as if its physical locations have become ghost towns. Comps have risen in each of the past 12 quarters, but that streak will likely come to an end when it reports financial results for its first pandemic-smacked quarter later this month.

One shouldn't underestimate Best Buy. Even with Joly stepping aside as CEO last year, the chain is still finding ways to pad its relevance. The stock is also trading at much lower multiples than Amazon. Its trailing P/E is in the low teens. Amazon fetches eight times the price-to-sales ratio of Best Buy.

There will be winners among the brick-and-mortar chains, and Best Buy is one of the few retail stocks getting it right in this climate. However, it's hard to bet against the global leader that isn't skipping a beat during this COVID-19 slowdown. Amazon is the better buy, but don't be surprised if both companies wind up beating the market from here.