Please ensure Javascript is enabled for purposes of website accessibility
Log In Help Join The Motley Fool
Free Article Join Over 1 Million Premium Members And Get More In-Depth Stock Guidance and Research
By Anders Bylund – May 15, 2020 at 4:47PM

The sanctions against Chinese tech giant Huawei were extended for another year, undermining investors' hopes of an improved component flow from American suppliers.

The Trump administration slapped new restrictions on Chinese technology giant Huawei early Friday morning. As a result, shares of American companies who count Huawei among their largest customers took a steel bath in Friday's trading session. Human interface specialist Synaptics (SYNA -1.56%) fell as much as 11.2%. Optoelectronic component makers II-VI (IIVI -1.75%) and NeoPhotonics (NPTN) lost as much as 12.8% and 19.6%, respectively.

Since May 15, 2019, Huawei has been restricted by an executive order aimed at restricting access to American technologies for "foreign adversaries" and their state-run businesses. The execution of this order is in the hands of the Secretary of Commerce, a title currently held by bankruptcy restructuring expert Wilbur Ross, in consultation with several other high-ranking government officials.

The executive order doesn't mention China or Huawei by name, but Wilbur Ross made that connection on the same day his department added Huawei to the so-called Entity List.

"This will prevent American technology from being used by foreign-owned entities in ways that potentially undermine U.S. national security or foreign policy interests," Ross said in a prepared statement.

The order was set to expire today, but Trump had other plans. 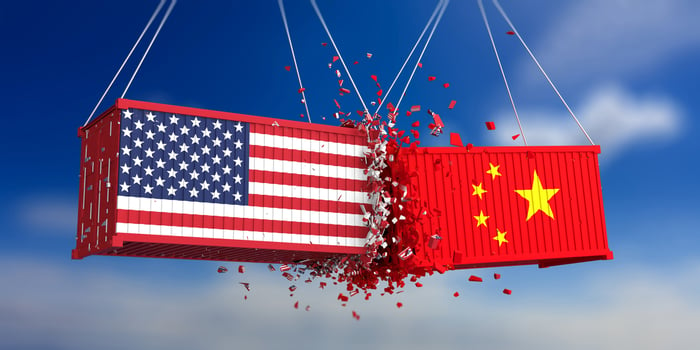 Huawei accounted for 44% of NeoPhotonics' sales in the last quarter before this order took effect. That revenue slice shrank to 36% in the next report as NeoPhotonics struggled to find ways around the government order. Effective mitigation ideas and a lighter regulatory regime helped Huawei climb back to a 52% revenue share in last month's first-quarter report. The extended order threw cold water on that positive trend.

II-VI is a much larger company. Its diverse customer list doesn't rely on any single client for 10% or more of its revenues, so this company should be insulated from the Huawei drama. The stock did react to the original Huawei order, but only because trade tensions with China could have blocked II-VI's then-pending merger with Finisar. That deal closed in the fall, and it looks like investors are shooting from the hip based on a misunderstanding in this case.

These three technology companies would love to see an end to the Sino-American trade tensions, but today's extended order undermined those hopes. None of these companies is dying here, because Huawei amounts to a relatively minor customer for Synaptics and II-VI, while NeoPhotonics keeps finding effective end-around plays. But they would certainly stand to gain additional business if Huawei were allowed to make unrestricted transactions with American component suppliers again, so the bearish market reaction makes sense.