Please ensure Javascript is enabled for purposes of website accessibility
Log In Help Join The Motley Fool
Free Article Join Over 1 Million Premium Members And Get More In-Depth Stock Guidance and Research
By Rich Duprey - May 15, 2020 at 9:21AM

Processors are operating at less than full capacity, leading farmers to slaughter herds.

The meat shortage that's led fast-food chain Wendy's (WEN 0.61%) to begin removing burgers from menus at some of its restaurants will last for months, according to JBS (JBSAY 3.52%), one of the biggest producers of beef and pork products.

Andre Nogueira, CEO of the Brazilian meat processor, which has production facilities in Colorado, Minnesota, Pennsylvania, and Wisconsin, and supplies nearly a quarter of the country's beef and one-fifth of its pork, told The Wall Street Journal the health and safety measures it implemented in response to the COVID-19 pandemic means "we will not be able to go to full capacity anytime soon." 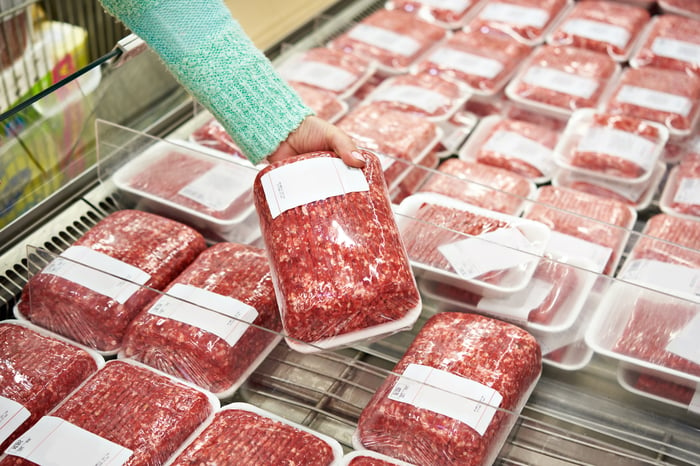 JBS, along with other protein processors such as Tyson Foods (TSN 0.05%) and Smithfield Foods, have had to close down processing plants due to outbreaks of the coronavirus, but as they've reopened, they're operating at less than full capacity.

Workers are now spaced farther apart while others have stayed home, either because they are sick or out of concern for their health. JBS says it has hired 1,000 new employees, though most have been assigned to extra cleaning duties at its facilities.

JBS is operating at 70% to 95% of their normal capacity, and with the slowdown at other processing facilities, cattle and hog farmers are slaughtering herds. So despite JBS directing its meat supply to domestic outlets instead of selling internationally, there will still be less meat in the meat cases at supermarkets and grocery stores for the foreseeable future.

Workers Are Dying at Meatpacking Plants, and Investors Need to Take Note