Please ensure Javascript is enabled for purposes of website accessibility
Log In Help Join The Motley Fool
Free Article Join Over 1 Million Premium Members And Get More In-Depth Stock Guidance and Research
By John Ballard – May 15, 2020 at 11:38AM

The last quarter provided a sharp contrast between the robust growth of "Call of Duty" and the stagnation of "Overwatch."

Activision Blizzard's (ATVI 0.75%) Overwatch has sold 50 million copies over the last four years, but despite high player engagement in the first quarter, the franchise wasn't credited for the strong revenue growth in the Blizzard segment. The segment grew revenue by 31% year over year in the first quarter, but the company attributed that primarily to World of Warcraft. Call of Duty, the other marquee shooter for the company, drove a similar performance on the Activision side of the business.

Overwatch has seen its player base decline over the last few years, which is concerning given the investment in esports with Overwatch League and efforts to grow the brand beyond gaming with licensed consumer products.

Blizzard is currently working on Overwatch 2, which was announced at BlizzCon in November and should drive healthy sales for the franchise when it's released. That release can't come soon enough, as the contrast in performance between Call of Duty and Overwatch in the first quarter makes it clear that Overwatch needs an overhaul to contribute more revenue to the company. 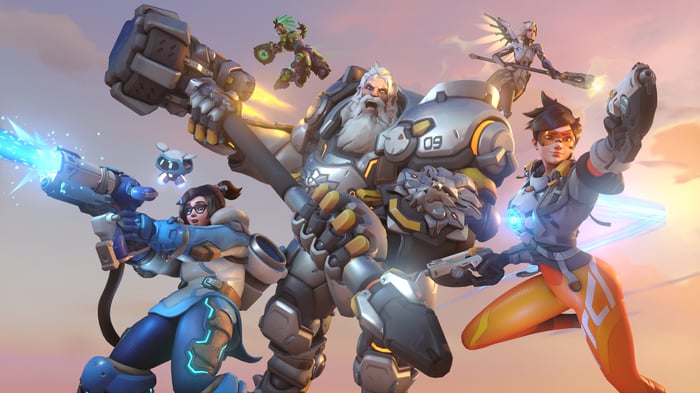 The first-person shooter genre is one of the most popular types of games in the industry. When Activision Blizzard released Overwatch in May 2016, it was an immediate hit. The game has continued to remain a highly touted shooter, especially on the esports scene with Overwatch League, but the franchise has shown signs of aging.

Blizzard has seen its monthly active users (MAUs) decline from 46 million in the second quarter of 2017 to 32 million in the first quarter of 2020. The company disclosed in its annual report that lower Blizzard MAUs in 2019 were caused by lower MAUs for Hearthstone and Overwatch.

Even the viewership for Overwatch League has hit a plateau over the last year. An exclamation point was put on the game's stagnation when Jay Won (aka sinatraa), one of the top players in Overwatch League, recently left the San Francisco Shock to join an esports team for Tencent's new shooter, Valorant. In a long post published on TwitLonger, Won explained why he left Overwatch League, stating that he, "Straight up just lost passion for the game."

Meanwhile, Call of Duty's momentum is surging. Activision is in full-assault mode, launching the franchise on mobile last fall and then a free-to-play battle royale version, Call of Duty: Warzone, in March. Sales from Call of Duty: Modern Warfare and in-game spending in Warzone drove a 64% year-over-year increase in the Activision segment last quarter.

The performance difference between Overwatch and Call of Duty illustrates why it's crucial to keep content fresh. As Call of Duty demonstrated, more content leads not only to higher engagement but also (most importantly) more revenue.

Overwatch is a colorful game with a cast of characters that could potentially make for a good animated TV series. There are licensed Overwatch Nerf blasters available through Hasbro, in addition to co-branded snacks from Kellogg.

There are lots of ways for Activision Blizzard to cash in on this intellectual property, but to fulfill its potential, the game needs to take a page from Call of Duty's playbook and release more content, more frequently. 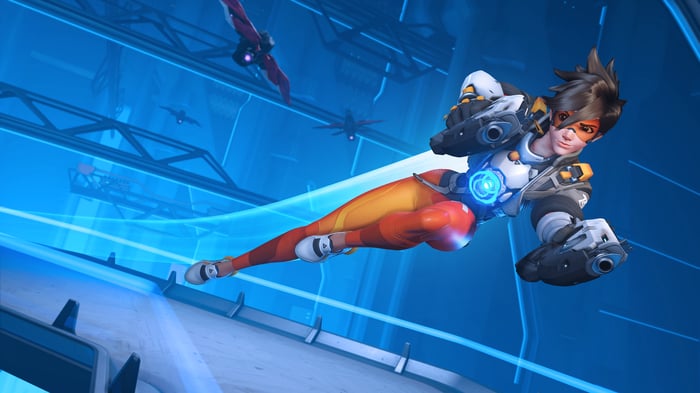 Management has a plan

It will take time, but it's clear that Activision Blizzard is following a plan to stimulate the growth in Overwatch. Last year, the company announced a major restructuring to invest more in its biggest franchises. We've seen the early fruit of these efforts with the momentum in Call of Duty. Overwatch may have its day to shine, too.

Blizzard is currently working on Overwatch 2, which doesn't have a release date yet, but will almost certainly create new buzz for the franchise when it comes out. While the sequel won't bring any significant changes to the competitive multiplayer mode from the original Overwatch, it will add a single-player story mode. The addition of a single-player mode could drive much higher time spent in the game, potentially leading to higher in-game revenue.

I also wouldn't rule out the possibility for a mobile experience for the Overwatch franchise at some point, especially given the company's new focus on making mobile versions of existing franchises, such as the recent Call of Duty Mobile, and the upcoming Diablo Immortal.

The first-quarter earnings report was a great start to the year for Activision Blizzard, but it also highlighted the stark contrast between the performance of the company's two shooters. If Blizzard invests as much in Overwatch as Activision Publishing is doing with Call of Duty, Overwatch could be a very lucrative franchise for this top video game stock.