Please ensure Javascript is enabled for purposes of website accessibility
Log In Help Join The Motley Fool
Free Article Join Over 1 Million Premium Members And Get More In-Depth Stock Guidance and Research
By John Ballard – May 15, 2020 at 8:15AM

This one metric point says Activision has an edge over its video game making rivals in the short term.

Shares of video game maker Activision Blizzard (ATVI -2.70%) have significantly outperformed competitors Electronic Arts (EA -1.52%) and Take-Two Interactive (TTWO -3.82%) year to date. Activision stock is up 26% since the beginning of the year, compared to less than 10% for its rivals at the time of this writing.

One reason for Activision's stellar performance is the release of Call of Duty: Warzone, a free-to-play battle royale game that was released in March and has brought in 60 million players. Investors expect Warzone to be a lucrative source of revenue for Activision, especially with stay-at-home orders in place, as players spend money on additional content while playing the game.

Wedbush analyst Michael Pachter has a buy rating on all three gaming stocks, but he is particularly high on Activision Blizzard for this reason: The company behind Call of Duty generates more of its revenue from in-game spending than Electronic Arts or Take-Two. This means Activision Blizzard is less dependent on new game releases, which could play to its advantage in the short term. 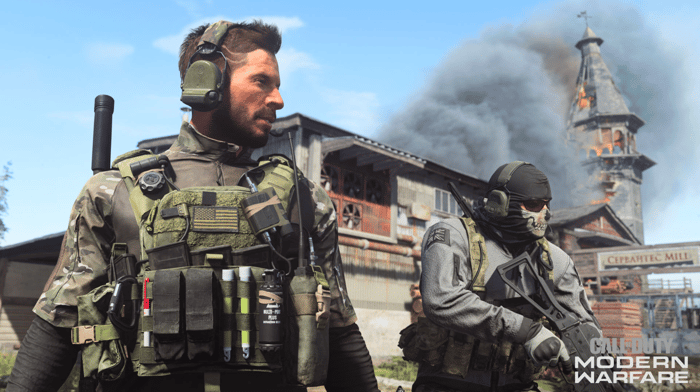 In 2019, Activision Blizzard generated 51.8% of its total revenue from in-game spending and 56% the year before.

Take-Two is last on the list, with around 40% of its revenue coming from in-game spending (or recurrent consumer spending) over the last few years.

Activision's in-game revenue was more than 60% of its total business in the first quarter. That is higher than what Electronic Arts reported for its March-ending quarter, in which live services made up 57% of EA's total revenue.

Take-Two will report its March-ending results on May 20, but in-game spending was less than half of its revenue in the most recent quarter.

This could be a big year for player engagement and in-game spending at Activision Blizzard. Since Warzone is free-to-play, Activision makes money when players buy Call of Duty Points, which is used as a virtual currency in the game to unlock additional content.

Activision also released Call of Duty Mobile last fall, a free-to-play title that has gained a massive following. Pachter expects the mobile version to generate between $300 million to $400 million in revenue, which is about 5% of Activision Blizzard's annual revenue.

The Call of Duty franchise is very popular, and management is seeing the interest in free-to-play offerings carrying over to momentum in the premium offering with Call of Duty: Modern Warfare that retails for $60 on console and PC.

Electronic Arts releases more new premium games every year than Activision does, which is one reason why EA generates a lower portion of in-game revenue to total revenue. The EA Sports titles, such as Madden and FIFA, get updated every year with a new release that retails for $60 and includes updated rosters and other new features.

The bulk of EA's live services revenue is derived from the Ultimate Team mode in Madden and FIFA, where players spend money on digital cards to unlock star athletes. In fiscal 2020, EA generated $2.78 billion from live services, representing an increase of 15% over the previous year. EA hasn't released its annual report for fiscal 2020 yet, but Ultimate Team comprised 28% of EA's total revenue in fiscal 2019 and has been rising steadily in recent years.

Take-Two's recurrent consumer spending increased 15% year over year in the December-ending quarter and made up 37% of revenue. The main drivers were Grand Theft Auto Online, Red Dead Online, and NBA 2K. 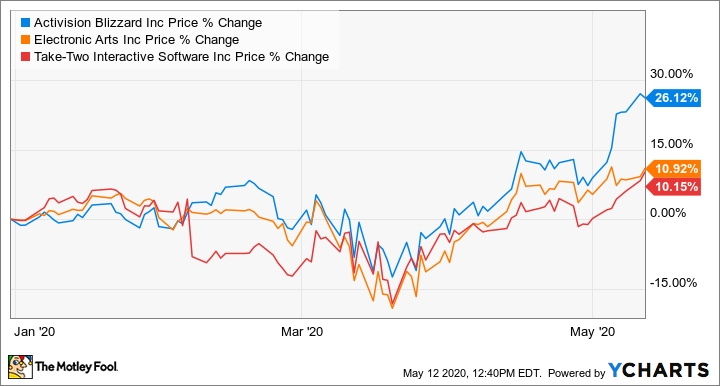 Activision is the Wall Street favorite for now

The digital distribution of content is bringing enormous benefits to these companies in the stay-at-home environment during the outbreak. The recent free-to-play offerings by Activision and EA should continue to attract players even in a bad economy.

However, Activision Blizzard is in a slightly better position than EA. Both Activision and EA have said that new game releases are on track this year since employees are able to work from home. But any disruption to new release schedules or a severe slowdown in consumer spending would likely hit EA and Take-Two harder than Activision since the first two generate more revenue from new game purchases.

Buying new games typically costs $60 on console and PC, so it's generally cheaper for a player to spend, say, $10 to download extra content to extend the life of an owned title.

The higher portion of revenue coming from add-on content explains why shares of Activision Blizzard have outpaced its rivals year to date, and why the shares may continue to outperform in the short term.