Please ensure Javascript is enabled for purposes of website accessibility
Log In Help Join The Motley Fool
Free Article Join Over 1 Million Premium Members And Get More In-Depth Stock Guidance and Research
By Zhiyuan Sun - May 16, 2020 at 5:40AM

This company bringing innovative cloud data solutions to the health care sector is trading at a premium, but it isn't too late to buy.

Veeva Systems (VEEV 0.32%) provides cloud-based software services for the global life science and pharmaceutical industries. The company's services include (but are not limited to) building databases to facilitate the progress of clinical trials, keeping investigators on track with their regulatory submissions to administrative bodies such as the U.S. Food and Drug Administration, and tracking orders between pharmaceutical representatives and their customers. Veeva's innovation of bridging the gap between the information technology (IT) and healthcare sectors has achieved much acclaim. Indeed, the company's stock has returned more than 420% since its IPO in 2013, outperforming the S&P 500 index's 67% return in the same period.

But like all high-quality growth companies, Veeva is trading at a staggering premium. Currently, the company is valued at over $29 billion, despite generating only $1.1 billion in revenue and $301 million in net income last year. Investors obviously have a rosy outlook on the company if they are willing to buy its stock at 25.5 times sales and 93 times earnings. The valuation has some skeptics wondering whether it's really worth it at this price. 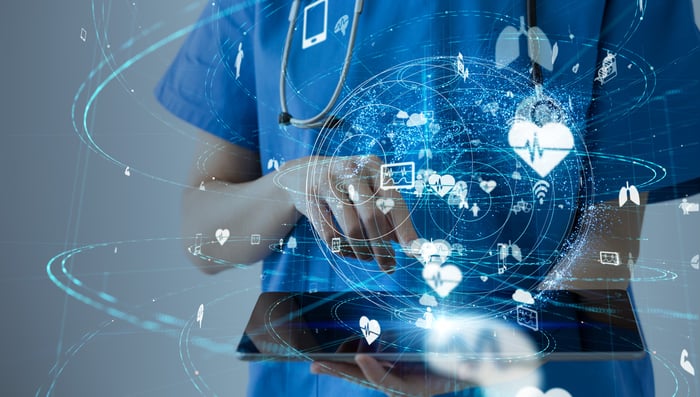 Not just any growth company

Even at first glance, the company is performing exceptionally. To start, Veeva's customers are some of the most recognizable pharma names including Eli Lilly (LLY 2.63%), Gilead Sciences (GILD 0.82%), and Merck & Co. (MRK 2.35%). Veeva's revenue streams are also well diversified, as no single customer makes up more than 10% of the company's overall revenue.

A remarkable feature of this growth is characterized by the fact that Veeva was able to turn a solid profit from the get-go. While many growth-stage IT companies witness exponential increases in their revenues, their net losses also accelerate astronomically year by year. The industry's profitability record isn't the best. Currently, companies in the sector on average boast a gross margin of 62.44% but are losing a great deal of money with operating margins and net margins amounting to negative 3.57% and negative 10.21%, respectively.

On the other hand, Veeva boasts an impressive 72.5% gross margin, 25.9% operating margin, and 27.2% net margin. This brings up another point: Veeva's net margin is higher than its operating margin largely because of interest income. The company has negligible amounts of debt while possessing more than $1.08 billion in cash and short-term investments.

Demand for Veeva's services isn't going away any time soon. In fact, demand received another boost. In response to the ongoing COVID-19 restrictions, Veeva has rolled out new initiatives on its platforms so pharma sales representatives can conduct remote meetings with physicians who need drug samples. Since March, over 100,000 such meetings have been conducted via the aid of Veeva, representing a 2,347% increase since January.

This year, Veeva is guiding for $1.4 billion in revenues, $500 million in operating margins, and $2.50 in earnings per share, representing significant increases from 2019. Overall, I think the fact that the company demonstrated its business model is essential during the COVID-19 pandemic should calm investors' fears of its high valuation. Sometimes, it can pay off significantly to buy a first-in-class company at a premium. For healthcare investors who have a philosophy of buying high and selling even higher, Veeva is a stock they do not want to miss.