Please ensure Javascript is enabled for purposes of website accessibility
Log In Help Join The Motley Fool
Free Article Join Over 1 Million Premium Members And Get More In-Depth Stock Guidance and Research
By James Brumley – May 16, 2020 at 11:11AM

The movie theater chain would be quite the catch, if not for its debt burden.

The rumor makes sense: E-commerce giant Amazon (AMZN -0.54%) has shown interest in the movie industry in the past, and as long as the audience for Amazon Studios' productions is limited to Prime members, the company is leaving money on the table. If it acquired movie-theater giant AMC Entertainment (AMC -2.87%), Amazon would shift into the mainstream of the film industry, and its ability to screen its releases would allow them to qualify for Hollywood's awards. It would also offer Amazon a way to expand its subscription ecosystem.

But there's one key reason that would make Amazon -- or any other prospective suitor -- hesitate to scoop up AMC at any price. The theater chain is weighed down by $4.8 billion worth of debt, which has proven to be the difference between a profit or loss for the past three years. As long as AMC is servicing this debt, it's unlikely to be viable. 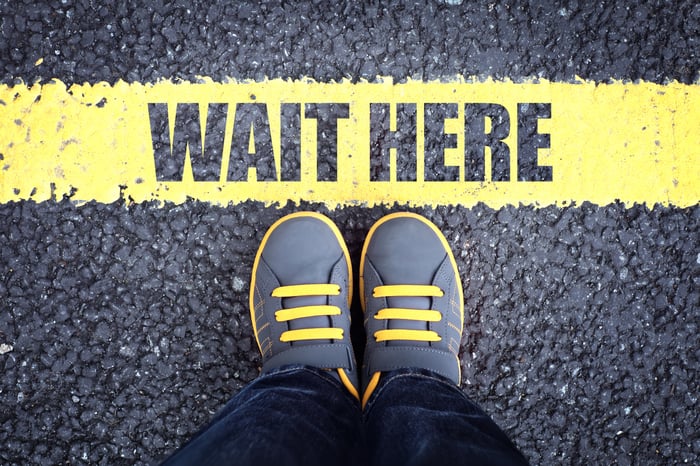 Now, debt isn't inherently catastrophic for a company. If it's used effectively to grow the top and bottom lines, taking on debt actually makes sense. In AMC's case, it built up its debt load for the right sorts of reasons, but now, it's fighting a headwind that won't abate anytime soon.

The table below puts things in perspective. AMC is growing revenue. It's even generating an operating profit after paying its bills, employees, and rent. It's not much, but operating margins between 2% and 5% aren't terrible for a movie industry that sends a big chunk of its box office receipts right back to Hollywood. But for the past three years, the interest payments it has made on its $4.8 billion debt load have dragged the theater chain out of the black and into the red (*for further explanation about that debt figure, please see the note at the bottom of this article).

The knee-jerk solution to this imbalance would be to simply cut expenses like food and beverage costs or other operating expenses that have added up in a big way. That's much easier said than done though.

It's a paradox in the truest sense of the word. AMC could feasibly cut expenses but not without undermining its much-needed revenue.

Largely lost in the discussion surrounding Amazon's potential purchase of AMC or any other movie theater chain is that the theater business is on the defensive. In the United States, major films sold $11.3 billion worth of tickets in 2019, according to data from Box Office Mojo. That sensational year was second only to 2018's $11.9 billion, which included the release of mega-hit Black Panther. The underlying trend has been one of steady revenue growth.

There's something of a catch to that growth trend though. It's been driven almost entirely by higher ticket prices and an increase in the number of theater seats.

Film industry monitor and data publisher The Numbers reports that in 2019, a total of 1.24 billion movie tickets were sold in the United States. That extended a broadly downward trend in ticket sales that first took shape after sales peaked at 1.57 billion in 2002. 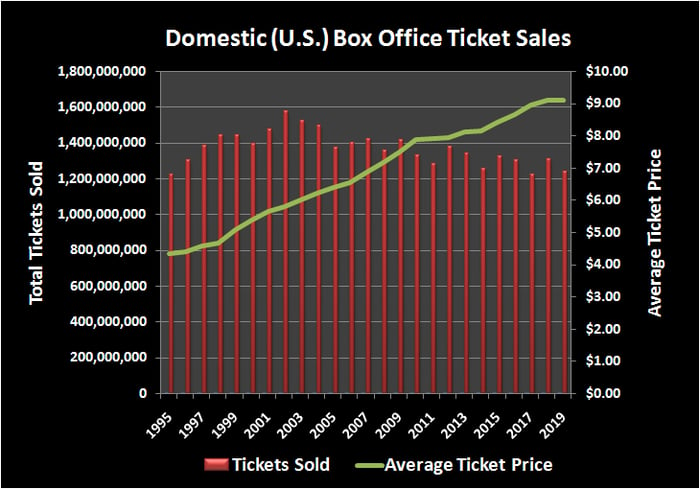 That data jives with numbers from the National Association of Theatre Owners, an industry trade group. It reports the total number of theaters in the U.S. and Canada has grown from 5,399 in 2010 to 5,548 as of last year. In terms of total screens, the figure has grown from 38,902 to 40,613 during the same period.

Were AMC to start shedding or shrinking theaters now, or somehow reduce the number of screens at each of its multiplexes, it could dramatically weaken its already-shaky capacity to extract revenue from consumers.

No pretty options ahead

AMC Entertainment may not be a high-growth operation ever again. But it doesn't necessarily have to be. If it could only break even, it would still serve as a viable distribution venue for Amazon Studios or any other film studio that wanted to ensure it's got somewhere to show its movies and drive ticket sales.

That's not quite what AMC is right here and right now though. The expenses involved in servicing its debt have left the company losing money in two of the past three years, and if it hadn't gotten some accounting-based help in 2018, that year would have been a squeaker too. The film industry might be willing to work with a lower-debt theater chain that is at least close to breaking even. It may not be interested in taking on a debt-laden project that operates within a struggling niche.

The irony is, the best thing that could happen for Amazon or any other potential suitor is an AMC Entertainment bankruptcy filing. That could wipe away most or all of its debt, after which a prospective buyer could step in and scoop up the remaining pieces of the company for little more than a song. Otherwise, any acquisition would come with the company's debt.

That's certainly nothing investors will want to hold out for, however, particularly now that AMC was able to raise $500 million worth of much-needed funding last month.

*In addition to $4.8 billion in legal indebtedness, AMC Entertainment's most recent balance sheet includes another $4.9 billion worth of operating lease liabilities related to the sale of certain properties. The theater chain remains "contingently liable for lease payments under certain leases of theatres that we previously divested." This has a debt-like impact on the company's fiscal results and is even counted as debt by some observers. But as the company explains in the SEC filing's fine print: "Due to the variety of remedies available, we believe that if the current tenant defaulted on the leases, it would not have a material effect on our financial condition, results of operations, or cash flows."

In other words, the aforementioned $4.8 billion that cost AMC nearly $300 million in interest last year is still its only debt worth worrying about.