Please ensure Javascript is enabled for purposes of website accessibility
Log In Help Join The Motley Fool
Free Article Join Over 1 Million Premium Members And Get More In-Depth Stock Guidance and Research
By Dan Caplinger - May 17, 2020 at 9:03AM

The coronavirus pandemic has had a huge impact on the entire globe. Aside from the direct health impacts of the COVID-19 outbreak, unprecedented measures like extended store closures have forced many major players in the retail industry to play to their strengths. For Amazon.com (AMZN 3.15%), the pandemic has demonstrated the immense value of the e-commerce business model, but it's also produced some unique challenges in handling the workforce that makes product delivery possible. Meanwhile, Ulta Beauty (ULTA -0.68%) has had to deal with temporary closures of its in-store salons, with hopes that it will be able to resume full operations in the near future.

Both Ulta and Amazon have produced amazing returns for shareholders over the past 10 years, but more recently, the two stocks have moved in different directions. Below, we'll look more closely at these two players in consumer products and services to see which one looks like the better bet for investors right now.

Both Amazon and Ulta have delivered multibagger gains since 2010, but Amazon has a clear advantage over the past year. The e-commerce giant has climbed almost 30% since May 2019, while Ulta has suffered a nearly 40% drop over the same period. 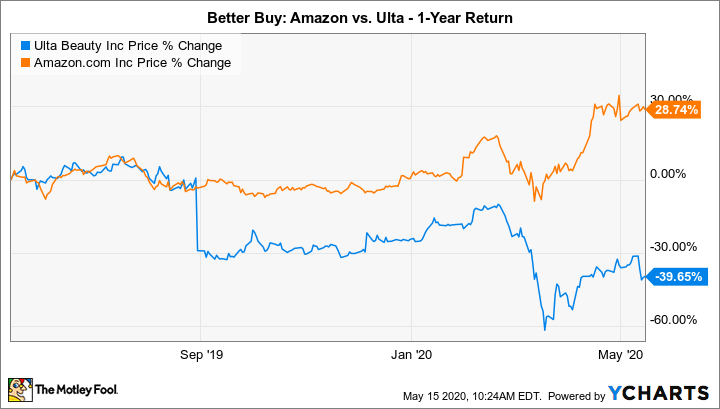 Valuation assessment is extremely challenging right now, because it's so tough to anticipate what the future will bring. Ulta stock currently trades at less than 17 times trailing earnings, but those following the beauty company see earnings falling by at least a third over the next year. That implies a forward earnings multiple closer to 25.

Amazon has always traded at extremely high earnings multiples, due largely to the company's tendency to reinvest money into expanding its business. However, investors don't see Amazon seeing nearly as big a hit to earnings in 2020, and they see growth resuming at an impressive pace next year.

Those who follow traditional valuation measures are going to favor Ulta over Amazon, even taking into account near-term earnings headwinds. Ulta's multiples have historically been much higher, adding to the value-based argument favoring the salon retailer.

Dividends and return of capital

Neither Amazon.com or Ulta are favorites among income investors, because neither one pays dividends to their shareholders. But going beyond dividend payments, capital allocation differs considerably between the two companies. For Amazon, significant amounts of free cash flow have gone toward paying down long-term debt, with more than $10 billion in net debt repayments in 2019. Amazon has used considerable resources for investing in new capabilities for its business, choosing not to return capital to shareholders.

Ulta, on the other hand, has a history of doing stock repurchases to return capital to shareholders. Over the past two years, Ulta's buybacks have added up to more than $1.3 billion, reducing the company's outstanding share count by more than 7% since 2018. By that measure, Ulta has done the better job of directly rewarding shareholders with capital return. However, Amazon's decision to reinvest in its business has produced strong results, and the need for Ulta to pull back on stock buybacks to conserve capital shows what can happen to repurchases during tough times.

Both Ulta and Amazon have big plans for the future, but Ulta has faced greater challenges in moving forward. What has brought Ulta so much success is its combination of in-store salons to give customers an experience they can take home with them along with a large inventory of beauty products they can buy. That combination has helped Ulta keep e-commerce giants like Amazon at bay, because Amazon can't offer the salon part of what Ulta provides. Now, though, with stores closed, Ulta is managing to collect some online sales. But the primary synergy from the business model is temporarily broken, and Ulta has had to hold off on implementing its store expansion plans until the coronavirus story is clearer.

Amazon, on the other hand, has seen business surge as a result of the pandemic. Shoppers stuck at home rely heavily on e-commerce to get the things they need, and that's shown up in Amazon's most recent financial results. The company faces higher expenses as a result of the coronavirus, but some of that spending aims to enhance Amazon's place in the industry. Moreover, the Amazon Web Services division has also seen a big boost, as more remote workers look for cloud-based tools to help them remain productive. The biggest risk is if consumers can't recover economically and are therefore unable to keep spending on Amazon's e-commerce platform, but at least for now, most of those following the stock are optimistic that the economy can avoid a worst-case scenario like that.

At this point, Amazon looks like it has the clearer path to a brighter future. If the coronavirus pandemic lets up in the near future in a way that lets Ulta invite its customers back to enjoy the same experience they had prior to the outbreak, the beauty company could rebound. Amazon has proven to be more resilient in the face of the pandemic, and that makes it a better buy right now.