Please ensure Javascript is enabled for purposes of website accessibility
Log In Help Join The Motley Fool
Free Article Join Over 1 Million Premium Members And Get More In-Depth Stock Guidance and Research
By Rich Duprey – May 17, 2020 at 10:38AM

Investors should follow the lead of consumers who have shown which companies they value most.

Even during a pandemic, the consumer is king. Perhaps even more so than usual, as you learn very quickly what products consumers prize most above all others.

That might lead investors to think they should stock up on toilet paper companies and gun manufacturers, as both products disappeared from store shelves immediately upon COVID-19 becoming a pandemic -- and investors probably wouldn't go wrong buying shares of such companies.

Below, though, are the three consumer discretionary stocks that look like they're the best buys now. 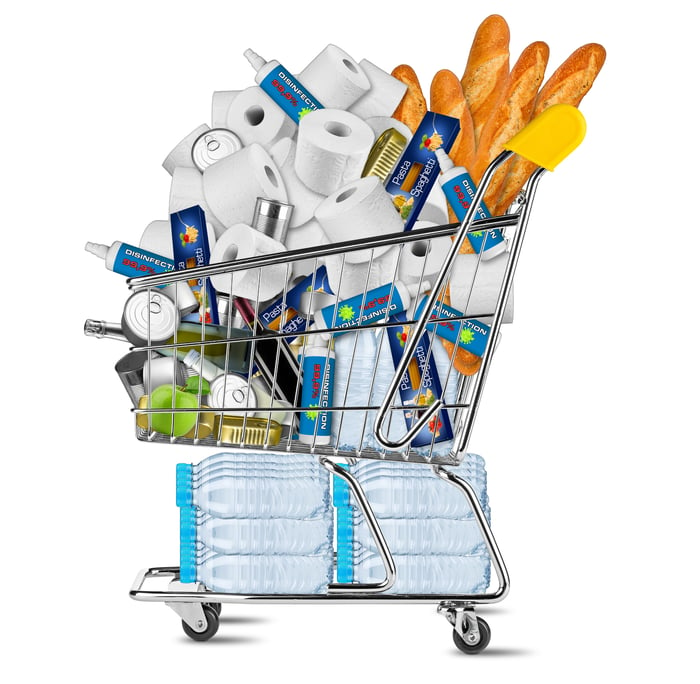 Consumers didn't just hoard T.P., paper towels, bottled water, and meat during the early days of the crisis (and in many respects, today); they also stocked up on cigarettes by the carton.

Altria's (MO 1.58%) first-quarter earnings report saw sales surge 16% as shipment volumes jumped 6% from the year-ago period. For an industry in a secular decline with fewer smokers every year, a big swing higher like that indicates people place a high value on cigarettes.

It's also why Altria remains a top stock to buy even when the world isn't falling apart: Its products, like its Marlboro brand of cigarettes, are always in demand and it has been able to pay an ever-rising dividend for years.

Shares of the domestic tobacco giant are down 26% this year due to troubles its investments in electronic cigarettes and marijuana have had, causing its payout to currently yield over 9% annually, but that makes its stock more attractive.

Altria is making, marketing, and distributing the cigarette alternative from Philip Morris International, the IQOS heated tobacco e-cig. Although it's only in a handful of markets, it will soon be available nationally and promises to become the biggest growth opportunity in the space.

Marijuana products also likely have a bright future, despite early stumbles, and Altria's investment in Cronos Group should pay off down the road.

Beyond toilet paper, disinfecting wipes are arguably the pandemic's next most sought-after product on the market -- or off. Clorox (CLX 0.58%) says it won't be able to match demand for its branded wipes until the summer, and as soon as it ships products to retailers, they're sold out within 45 minutes.

Even with factories working around the clock and limiting what it produces to just a narrow selection so it can make what the market is demanding, it can't keep up. And this should continue well beyond when the crisis passes, as consumers will still look to ensure surfaces are germ-free.

Of course, Clorox makes more than just disinfecting wipes and bleach. It has a portfolio of well-known consumer products that lead their respective markets, such as Pine-Sol, Brita, and Kingsford, all of which Clorox generates 80% of its revenue from.

It also has a long history of paying a dividend, and it has increased the payout every year for over 50 years. Although it yields just 2% annually, the company itself remains solid, and as demand for its disinfecting wipes has surged 500% since March, it's got a groundswell of consumer support that should keep it growing into the future.

Walmart (WMT 1.65%) was deemed an essential business from the get-go of the outbreak, giving it a competitive advantage over its rivals that has seen its sales also experience blistering growth.

Although there is no reason why small and mid-sized companies couldn't have also imposed social distancing rules in their stores instead of being forced to shut down and send their owners to near ruin, it's only at Walmart and other similarly positioned mass merchandisers where you can buy clothes and other so-called non-essential items. Walmart is able to make massive profit at the expense of its competitors that are stumbling toward bankruptcy.

This, of course, only further ensures the dominance of Walmart in the marketplace, so that when we finally emerge from this crisis the retail company will be in an even better position than it was before. Primarily in physical retail, but increasingly online too, where it is challenging Amazon.com on multiple fronts, Walmart is the clear winner.

As with Clorox, investors can rest reasonably assured that its dividend, which yields 1.7%, will continue to be paid out. The retailer has a near-50-year record of increasing its dividend, and having been granted special favor in the marketplace, that dividend is not in any danger of being cut.