Please ensure Javascript is enabled for purposes of website accessibility
Log In Help Join The Motley Fool
Free Article Join Over 1 Million Premium Members And Get More In-Depth Stock Guidance and Research
By Nicholas Rossolillo - May 18, 2020 at 7:40AM

These companies have lots of growth potential ahead of them.

Mid-cap companies, as the title implies, are businesses that have grown enough to no longer be considered small but remain significantly smaller than the biggest corporations. While the definition is subjective and arbitrary, mid-caps are generally considered to be businesses with a market cap between $2 billion and $10 billion.

Mid-cap stocks can be lucrative territory to invest in. Many of these companies have proven and profitable business models, and they have momentum on their side. Three that fit that description and look like buys right now are Skechers (SKX 0.53%), Universal Display (OLED 3.55%), and Wix.com (WIX 2.16%).

A shoemaker with a loyal global following

Skechers is a potential rebound story -- it's experiencing some choppy seas as nearly all of its global retail stores were closed in March as nonessential businesses closed to help slow the spread of COVID-19. Most of its third-party distributors also shuttered their stores, nearly eliminating the brick-and-mortar retail channel Skechers primarily relies on. The shoe company's stock has fallen some 42% year to date as investors anticipate its losses.

It wasn't all bad, though. Management revealed that revenue from its e-commerce segment grew 70% year over year in the first quarter, and another 250% through the first three weeks of April. Based on where it began in the spring months, digital channels were operating at a $500 million a year run rate. That's a far cry from the $5.2 billion in sales in 2019, and the company's health will depend on the reopening of physical stores, but e-commerce is effectively life support for Skechers until those retail locations open back up.

While the metric could deteriorate going forward if revenue comes in lower than anticipated, Skechers stock trades for just 11.1 times expected one-year forward earnings. And while losses could mount, I think Skechers' message of comfort and affordability will continue to resonate with its fast-growing base of global fans -- perhaps greater than before with global recession no doubt underway. In fact, while the situation may look dire here in the U.S., it's important to remember that nearly 60% of Skechers' sales came from overseas. This is a geographically diverse retailer that has built a strong following in emerging markets like China, which is already mounting an economic recovery from the pandemic.

And in the meantime, Skechers is well-capitalized to weather the storm. Headed into this crisis, the company had next to nothing in debt, allowing it to draw down $490 million from its revolving line of credit as a safety net. It had $1.37 billion in cash and equivalents and total debt of $699 million at the end of the last quarter. This is a well-funded, mid-cap shoemaker that I think will resume its growth story once the dust settles. 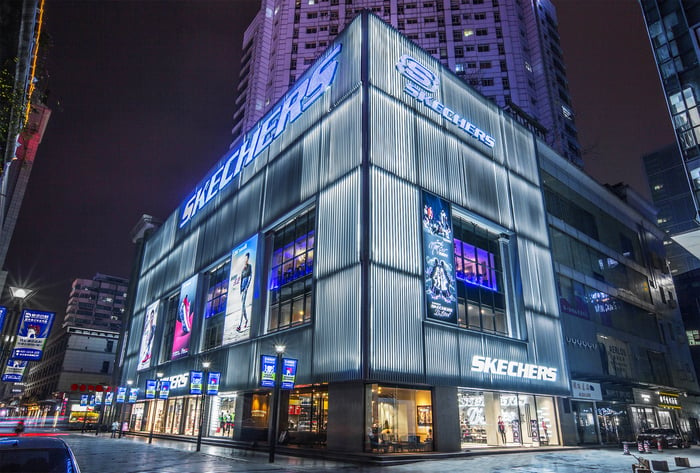 Universal Display has also been beaten up during the last couple of months. The company holds patents on ultra-high-definition OLED screen technology and also sells some of the raw materials needed in the display tech's manufacture. Shares remain down by more than 30% year to date due largely to investors' concerns that supply chains could get disrupted later in the year due to economic shutdowns, as well as a potential drop in demand for new devices. Those worries have lingered even though Universal Display surprised investors with another period of strong growth to kick off the new year.

Revenue and net income in the first quarter rose 28% and 21% year over year, respectively. Some of the gains were due to a recognition of revenue at the end of 2019 when a Chinese customer ordered extra material due to U.S.-China trade war concerns, and another customer made more advance purchases early in 2020 to plan for potential supply chain constraints. Further clouding the picture of the immediate future, Universal Display also withdrew its financial guidance for the year.

Nevertheless, the longer-term outlook remains unchanged -- namely, for OLED screen manufacturing capacity to increase 50% from end-of-2019 levels by the end of 2021. While manufacturing capacity doesn't automatically equate to the same increase in revenue for Universal Display, it nonetheless illustrates the gradual migration from legacy LED displays to OLED that is taking place. Given that it still accounts for a low single-digit percentage of the total global display market, there is lots of runway left for Universal Display to continue making inroads.

Calling this stock "cheap" even after its most recent pullback wouldn't be accurate. At 46 times trailing 12-month free cash flow and 51 times expected forward earnings, investors are pricing in at least a year or two of growth similar to what was just reported. But given the opportunity ahead of the company and its highly profitable business model, Universal Display is a growth-at-a-value bet I'm willing to make for the long haul.

Shifting from the value message, this final pick is a momentum stock. Wix just reported strong growth in the first quarter as small businesses and entrepreneurs shifted en masse to online operations so they could continue to function amid shelter-in-place orders. Revenue increased by 24% year over year, and free cash flow grew 33%, building on the strong showing the company had exiting 2019.

Wix reported a massive surge in new user sign-ups in the first quarter -- 6.9 million were added, bringing the total to 172 million, a 16% annual increase. It added 162,000 premium subscriptions for a total of 4.7 million, a 12% increase. But growth accelerated dramatically in April: 3.2 million users registered, 63% more than last April, and premium subscriptions were up 207%.

It will take time for Wix to monetize the surge in demand for its website management and e-commerce solutions, but early expectations are positive. While many businesses are slashing or withdrawing guidance, Wix said it expects its second-quarter revenue growth to accelerate to 25% to 26%, and free cash flow to increase by 33% to 40% year over year.

Wix isn't a pure value stock either, trading for 13 times trailing 12-month sales and 76 times free cash flow. But it could be viewed as a relative value compared to fellow e-commerce enablement champion Shopify. While its growth hasn't been as pronounced as that of its larger peer, Wix does operate at a profit and is getting a massive boost from businesses attempting to adapt to the times. I'm a buyer of this small-ish website management outfit.