Please ensure Javascript is enabled for purposes of website accessibility
Log In Help Join The Motley Fool
Free Article Join Over 1 Million Premium Members And Get More In-Depth Stock Guidance and Research
By John Ballard – May 18, 2020 at 6:18AM

Should you invest in the brand that is on your feet, or the one that motivates you to exercise?

Fitness stocks have been standout performers in the retail industry in recent years. Nike (NKE -1.55%) is the world leader in footwear and has seen steady growth in sales of its colorful sneakers. But the store closures over the COVID-19 pandemic brought its momentum to a halt.

For investors looking to juice their returns, they might want to check out Peloton Interactive (PTON -0.93%), which has seen exploding growth with its premium brand of exercise bikes. Peloton looks like a stronger business right now, experiencing high engagement during the last quarter with stay-at-home orders in place.

Both growth stocks are promising, but I believe Peloton could significantly outperform Nike over the next 10 years. Here's why. While I'm not an advocate of chasing stock-price momentum, it's worth pointing out that Peloton has significantly outperformed the broader market and Nike through the pandemic. Year to date, shares of Peloton are up 66%, while Nike stock is down 15%. 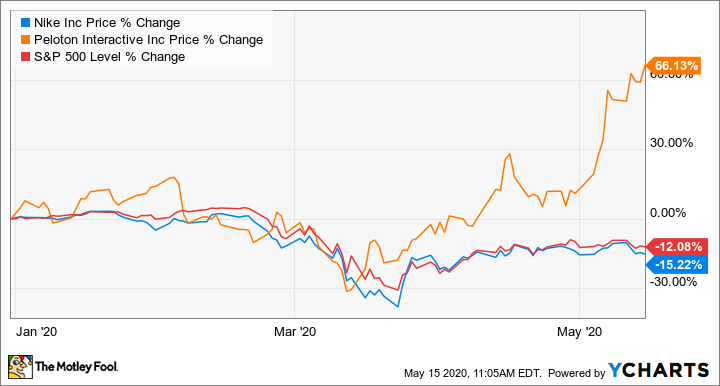 Investors have bid up the price of Peloton because it is perfectly positioned to benefit from the work-from-home trend in the short term, while still offering substantial growth potential over the long term.

In Peloton's March-ending quarter, connected fitness subscribers worked out an average of 17.7 times per month, a healthy sign of engagement. That's up from 12.6 in the December-ending quarter and up from 13.9 in the year-ago period.

On the other side, Nike is struggling, with most of its stores in North America closed (although nearly all stores in greater China and South Korea are now open). Nike can mitigate some of those lost sales with its mobile apps, in addition to offering workout programs through its Nike Training Club app. Last quarter, strong engagement in the Nike Training Club in China carried over to strong performance in the e-commerce channel. Management plans to divert more resources to support the digital channel in North America in the short term to achieve the same outcome.

But the company is still mostly dependent on brick-and-mortar stores to drive sales growth. The digital channel made up only 20% of Nike's business as of itsFebruary-ending quarter, including company-owned and retail-partner channels.

Peloton is growing much faster

Peloton's total revenue climbed 66% year over year to reach $525 million in the last quarter. Connected fitness subscriptions grew 94% year over year, while paid digital subscribers through the Peloton app grew 64% to 176,600. It now has a total subscriber base of 2.6 million.

In the last quarter, Nike reported revenue growth of 5% year over year. Growth will slow in the next few quarters, with stores closed and high unemployment almost certainly leading to lower consumer spending. Analysts currently expect Nike to report a decline in revenue of 0.70% for fiscal 2020, but revenue is expected to rebound by 7.9% next year.

Meanwhile, Peloton is speeding up. During the fiscal third-quarter conference call, CEO John Foley said, "As you might imagine ... the shelter-in-place and work-from-home realities have created a meaningful tailwind for Peloton and a broader ongoing consumer shift toward home fitness experiences."

As a result, Peloton issued a robust growth outlook for the fiscal fourth quarter ending in June, with revenue now expected to be up approximately 128% year over year. Full-year revenue growth is now expected to reach 89% at the midpoint of guidance, compared with management's previous expectation for growth of 68%.

Neither stock looks like a bargain on valuation. Nike has earned a high valuation from investors mainly due to its brand recognition and consistent performance.

At the time of this writing, Nike's 10-year return is 409%, or about 15% annualized. I wouldn't expect to achieve anything better than these returns through 2030, especially since Nike's price-to-earnings multiple has stretched higher over the last decade.

Even after the recent sell-off, Nike's share price still sits at a relatively high valuation of 35.7 times forward earnings estimates, or 31.9 on a trailing basis. It's possible Nike's return will be lower over the next 10 years, if the stock's valuation trends back to its past average. 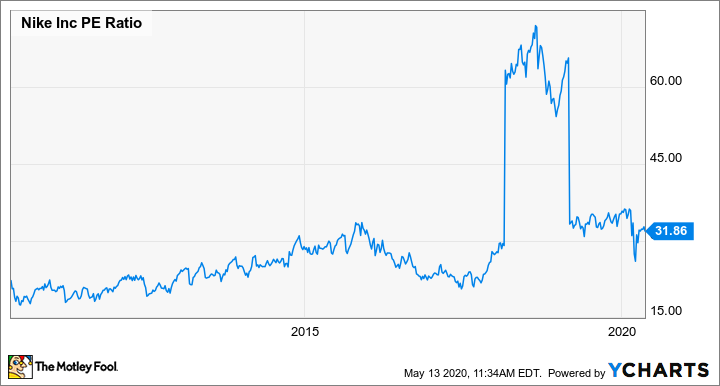 Peloton has been reinvesting all its gross profit from selling bikes and treadmills into marketing, studios, and technology to support future growth. Peloton sells its bikes and treadmills at a profit, with the gross margin on connected fitness products at 45.3% last quarter. But the company spends a high percentage of its revenue (more than 30%) on marketing, which leaves no profit on the bottom line.

However, the high demand experienced in recent months puts Peloton on track to reach profitability three years ahead of schedule. Previously, management's outlook had called for adjusted operating profit to reach positive territory by fiscal 2023. But now management is calling for the adjusted operating margin to be approximately 11.8% in the fiscal fourth quarter.

Peloton is small, with just $1.44 billion in trailing-12-month revenue, so this growth stock has got a lot of room to grow. The company estimates its immediate addressable market at 14 million subscribers, or nearly seven times its current user base. Peloton's long-term subscriber base could grow even higher than that, depending on how many of the more than 100 million who have gym memberships globally decide to enjoy the convenience of working out at home.

I like Nike and own the stock, but Peloton's growth ceiling is much higher, and recent results show that its business strategy is working, and picking up steam.

For these reasons, I would buy Peloton.