Please ensure Javascript is enabled for purposes of website accessibility
Log In Help Join The Motley Fool
Free Article Join Over 1 Million Premium Members And Get More In-Depth Stock Guidance and Research
By Amar Khatri - Updated May 19, 2020 at 10:03AM

Irish biopharmaceutical company Amarin (AMRN 3.11%) posted record revenue of $155 million in its first-quarter earnings reported April 30, marking an 112% year-over-year increase for a net loss of $20.6 million, or $0.06 per share. The company's sole product, Vascepa, is a drug derived from fish oil. It was approved by the U.S. Food and Drug Administration (FDA) as an add-on with statin therapy to lower the risk of heart attack, stroke, and cardiovascular disease and to bring down high levels of triglycerides in adult patients.

Shares of Amarin are down 65% year to date, underperforming both the Virtus LifeSci Biotech Products ETF and SPDR S&P Biotech ETF. The stock plummeted in late March after the company lost a patent trial it had brought against two generic drug manufacturers, Hikma Pharmaceuticals and Dr. Reddy's Laboratories, which were seeking to sell an equivalent version of Vascepa. The decision weakened Amarin's protection against potential generic competition, and the company filed an appeal with a federal circuit court earlier this month. The outcome of that decision will be key for Amarin's revenue in the U.S., and the company anticipates a ruling near the end of 2020 or in early 2021.

Investors may want to know whether this stock is worth considering. Here are the key takeaways. 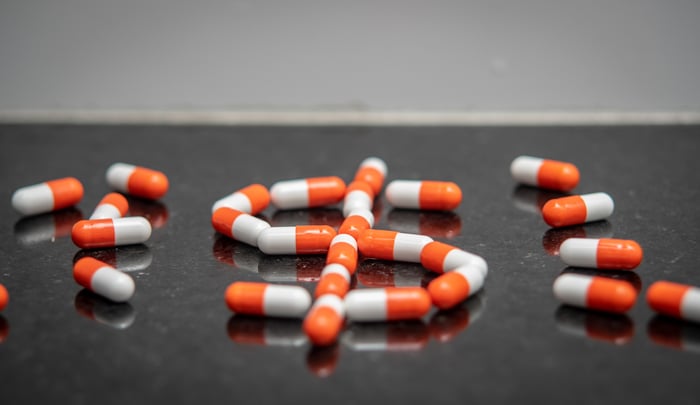 As mentioned, Amarin's first quarter was a success, with increased revenue and gross margins from sales of Vascepa in the U.S. The company reported positive net cash flow from operations and expanded its sales force to 800 representatives and managers. Combined with improved managed care coverage for Vascepa in the U.S., this improved sales growth in Q1.

The expansion of sales representatives provides a unique opportunity for Amarin to educate healthcare professionals about the benefits of Vascepa in cardiovascular risk reduction, which should help bolster the number of prescribers. Third-party data shows that the estimated number of Vascepa prescriptions for the three months ended March 31 of this year was up 72% from 2019, reflecting the drug's increased coverage under managed care and its growing use among high-risk patients.

That said, this success may not continue. The COVID-19 pandemic has management uncertain about its targets going forward. Some sources are reporting a 70% decline in patient interactions with doctors during the pandemic, and while this data is not exclusive to Amarin or Vascepa, management says it's hearing similar numbers from its sales representatives. Social distancing measures have created challenges for the sales team, including the suspension of in-person meetings. Nonetheless, management says the sales team has identified new methods to receive feedback from healthcare providers. They expect a decline in continued growth from current prescribers in the second quarter, noting a decrease in prescriptions in the month of April.

Investors should be excited to learn that growth lies ahead in international markets. Canada -- where about 2.4 million people have been diagnosed with heart disease -- is a likely source, representing the majority of Amarin's non-U.S. net product revenue in the first quarter.

China may also offer an exciting commercial opportunity once Amarin's partner there, Eddingpharm, nears completion of a clinical trial later this year (barring any COVID-19-related delay). Success in China -- where management believes about 17.7% of the adult population, or 185 million people, has high levels of triglyceride (hypertriglyceridemia) -- will position Vascepa as a first-in-class drug.

The Middle East and North African (MENA) region may provide another area of growth. In 2016, Amarin entered into a partnership with Dubai-based biotech Biologix FZCo, which has a direct presence in 17 countries of the MENA region. Vascepa has been approved in Lebanon, United Arab Emirates, and Qatar. It is currently under registration in other countries in the MENA region.

As for Europe, Amarin submitted a marketing authorization application (MAA) to the European Medicines Agency (EMA) to allow for the sale of Vascepa there. A decision is anticipated near the end of 2020. Cardiovascular disease is the leading cause of death for both men and women in many parts of the EU, and an approval of Vascepa in the region may provide future top-line growth and long-term shareholder value by increasing sales, earnings, and free cash flow.

Amarin is currently evaluating two options for a European launch of Vascepa: either directly or through a pan-European partner that will benefit its shareholders. It is expected to make a decision by Q3 2020.

In the original patent infringement case, Amarin Pharmaceuticals (the plaintiff) was seeking to prevent Hikma Pharmaceuticals and Dr. Reddy's Laboratories (the defendants) from launching generic competitors to Vascepa. The most recent decision in the case held that Amarin's patents did not meet the criteria of "non-obviousness," making them invalid. Amarin's decision to appeal the court's ruling and file a preliminary injunction prevents rivals from launching generic competitors to Vascepa -- even if they receive FDA approval of an Abbreviated New Drug Application (ANDA) for generic drugs -- until the court's final decision is reached.

Many questions remain about how quickly a generic version of Vascepa can be rolled out in the U.S. Neither Hikma Pharmaceuticals nor Dr. Reddy's Laboratories is currently positioned to launch such a drug, and it appears that there are no ANDA applications for one pending FDA approval. Hikma noted in a press release March 31 that its working with the FDA toward approval. A launch is possible by 2021 or 2022.

Amarin's management believes that its generic competitors face difficult hurdles in coming to market. The appeal and injunction create significant risks, costs, and delays, and if Amarin wins the appeal, Hikma and Dr. Reddy's may be required to pay large fines and damages to Amarin.

There's also the question of manufacturing facilities. Amarin currently has three facilities to manufacture Vascepa, and it's unclear whether its competitors have even one. The setup of such a facility could take six months even before any generic drugs are produced.

Amarin's legal strategy could be advantageous, as it allows additional time for patients and healthcare providers to learn what differentiates Vascepa and strengthen its brand recognition in the U.S. market. Investors should stay tuned for updates regarding the trial.

Amarin is in a healthy financial position, with $624 million in cash and investments and assets that exceed its liabilities. In the most recent quarter, it had a debt-to-equity (D/E) ratio of 8%, where a number less than 30% implies a low use of debt to finance its operations.

With a price-to-book-value ratio of 5, Amarin is undervalued compared with its peers, including Acadia Pharmaceuticals (12.4) and Sarepta Therapeutics (9.6). Another key method for valuation is its price-to-sales ratio (P/S). Amarin's P/S is 5.3, much lower than Acadia's at 20.8 and Sarepta's at 25.9. This implies that it's undervalued compared with its peers and with the broader market.

Considering the impact of the pandemic, Vascepa's potential expansion into new markets, and ongoing legal issues, Amarin has both upside and downside potential. International markets offer opportunity; China and Europe, especially, could be key contributors to revenue if Amarin does not win its appeal. The company's legal strategy puts it in the best position to capture the U.S. market before the launch of generics, and with its healthy financial position and valuation, investors who've considered the risks should buy shares during the next dip.