Please ensure Javascript is enabled for purposes of website accessibility
Log In Help Join The Motley Fool
Free Article Join Over 1 Million Premium Members And Get More In-Depth Stock Guidance and Research
By Dan Caplinger - May 19, 2020 at 11:53AM

Markets were mixed on Tuesday as some sectors of the economy couldn't build on Monday's gains.

Wall Street was mixed on Tuesday morning, consolidating Monday's huge gains. Market participants generally seem to remain optimistic about the prospects for the economy as many states and cities are setting timelines for reopening nonessential businesses.

Retail stocks have been among the hardest hit by the coronavirus pandemic, and they largely posted solid gains on Monday in hopes that the chains will be able to reopen stores and get back to something closer to normal in the near future. Nevertheless, retailers didn't fare well on Tuesday morning. Much of the pessimism centered on the latest financial report from department store retailer Kohl's (KSS 2.98%), but there was a broader pattern that speaks to the longer-range prospects for the entire industry.

Shares of Kohl's were down 9% Tuesday morning following the release of its first-quarter report. The retailer had some encouraging words for those who are worried about its long-term prospects, but the immediate numbers were still ugly. 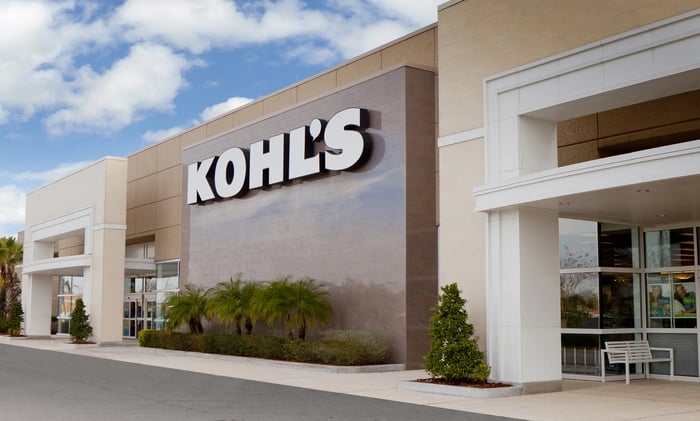 Kohl's saw its revenue plunge 41% during the quarter that ended on May 2, with net sales falling an even steeper 44% year over year. That top-line decline led to a reversal of Kohl's modest profit in the year-ago quarter, and reductions in overhead weren't enough to keep the red ink from flowing freely. The retailer posted an adjusted loss of $3.20 per share for the period.

CEO Michelle Gass highlighted the steps Kohl's has taken during the pandemic. It has cut back on inventory levels, suspended stock buybacks, and just today announced it would stop paying its quarterly dividend at least temporarily. Efforts to raise capital through debt issuance and refinancing have been successful, and Kohl's has reopened about half its U.S. stores. Moreover, online sales jumped about 60% in April, showing that some shoppers are replacing their store visits with e-commerce purchases.

Nevertheless, Kohl's suffered more damage than investors had expected. That sent the stock down and sent shock waves across the industry.

Will shoppers come back?

The biggest challenge facing retailers across the industry is the threat of bankruptcy due to having insufficient liquidity. That's not an immediate concern for Nordstrom, Macy's, or Kohl's, as they've taken steps to try to shore up their cash reserves and borrowing capacity in order to make sure that they can deal with losses from coronavirus-related closures and disruptions.

Industry watchers also expect that retailers will have to ramp up on promotional discounts in order to get shoppers back in their stores. There will likely be some pent-up demand among customers who've faced lockdowns for a while, but there could also be reluctance among many to go back out in public, even with safety measures in place.

As much as investors want things back to normal, it's going to take some extra work for the retail industry to get back into gear. Until that happens, shareholders should expect continued turbulence from Kohl's, Nordstrom, Macy's, and their retail stock  peers.