Please ensure Javascript is enabled for purposes of website accessibility
Log In Help Join The Motley Fool
Free Article Join Over 1 Million Premium Members And Get More In-Depth Stock Guidance and Research
By Rich Smith – Updated May 19, 2020 at 1:38PM

And why it then gave more than half of that back.

Shares of Chinese internet search giant Baidu (BIDU 2.83%) surged in early trading Tuesday, rising more than 12% before turning around and giving back more than half of those gains. As of 12:30 p.m. EDT today, Baidu stock was up 4.7%. 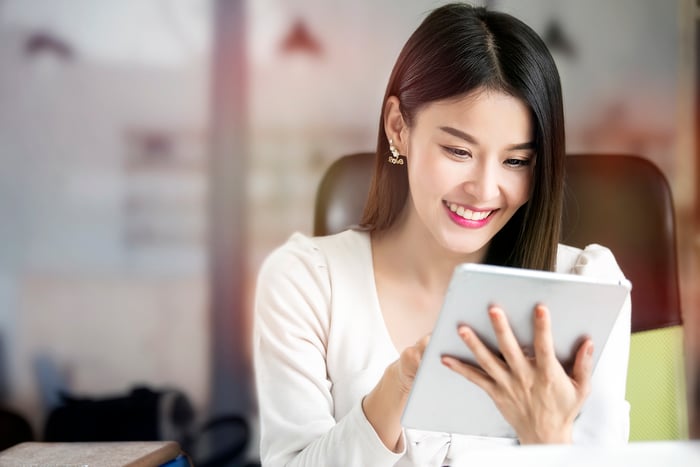 Now for the bad news. Calculated according to generally accepted accounting principles (GAAP), it appears Baidu earned no profit at all, down from $0.02 per ADS a year ago.

Moreover, the size of Baidu's sales beat was significantly less impressive than the pro forma earnings beat. Sales were only $3.18 billion in the quarter, not too much better than the $3.1 billion that analysts had predicted, and down 7% year over year.

And Baidu's explanation for the declining sales was a bit strange for an internet company: "Despite shelter-in-place in the first quarter, Baidu's total revenues declined just 7% year over year." With more people than ever trapped at home in Q1, presumably surfing the web much of the time, you might have expected Baidu's sales to surge in the quarter, but they did not.

The company says that "traffic remained robust with Baidu App [daily active users] reaching 222 million, up 28% year over year, in-app search queries up 45%, and feed time spent up 51%." But it would appear that Baidu's sales of advertising to service all those users and queries dried up, causing revenues to shrink rather than expand.

Nor should investors expect a quick turnaround. In giving new guidance for Q2, Baidu warned that sales could grow as much as 4% this quarter or might fall as much as 5%.

Taken at the midpoint, this guidance works out to basically zero revenue growth, which is better than analysts have been forecasting for Baidu but still hardly anything to get excited about.